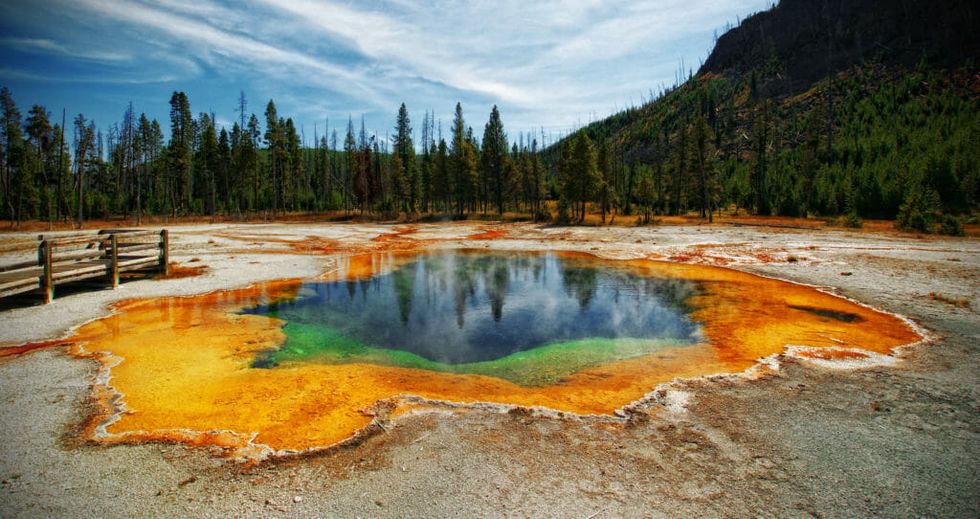 It sounds like something out of a bad blockbuster movie: A supervolcano erupts, spewing hundreds of cubic miles of magma, incinerating everything within 60 miles, and creating such a massive cloud of ash it blankets most of North America, blacks out the sun, and fills the air with toxic gases. Day becomes night and three feet of ash coats every possible surface, clogging roads, choking out crops, making it nearly impossible to breathe.

This kind of disaster is not just the hallmark of Hollywood, but the potential of an actual supervolcano eruption. Supervolcanoes are actually calderas—enormous craters deep in the ground—with a magma source capable of erupting 240 cubic miles or more. Most of these volcanoes are actually minimally active but they can produce “intensely explosive blasts registering at the upper end of theVolcanic Explosivity Index(VEI),” according toIFLS.

There are 20 known supervolcanoes around the world, and the most concerning to the United States simmers deep below Yellowstone National Park in Wyoming.

The Yellowstone Calderameasures 30 miles by 45 miles. “If it were to blast its innards out in a super-eruption, it’s no exaggeration to say that the human race could be imperiled,” reporter Kate Baggaley wrotefor NBC News.

Scientists have been monitoring and studying Yellowstone’s supervolcano for decades, entertaining solutions to this volcanic problem. Enter NASA, whose scientists have come up with the bare bones of a plan they believe could not only keep us from a fiery death, but could turn the supervolcano into ageothermal source of electric energy.

The BBC interviewed NASA scientists about why they decided to make such a plan when the volcano only erupts once every approximately 100,000 years. As it turns out, to the best of scientists’ knowledge, Yellowstone’s supervolcano erupts every 600,000 years, and it has been about that much time. In other words, she’s due to blow.

“I was a member of the NASA Advisory Council on Planetary Defense which studied ways for NASA to defend the planet from asteroids and comets,” Brian Wilcox, an aerospace engineer at NASA’s Jet Propulsion Laboratory (JPL) in Pasadena, California, at the California Institute of Technology,told BBC. “I came to the conclusion during that study that the supervolcano threat is substantially greater than the asteroid or comet threat.”

Their first solution was to try and find a way to cool the volcano down—a feat of enormous proportions, given that Yellowstone’s supervolcano is the heat-generating equivalent ofsix industrial power plants. As it is, about 60-70% of the heat rising from the volcano escapes into the atmosphere (making for some cool geysers and heat vents) due to water that oozes down the cracks of the earth into the magma chamber. The remaining heat, having nowhere to go, gains literal steam inside the magma, which dissolves the volatile gases and rocks inside it. Inevitably, when the heat and pressure become too great, an eruption follows.

NASA estimated that even a 35 percent increase in heat transfer outside of the magma chamber would turn Yellowstone from a threat to humanity down a notch to just regular, boring old volcano. The only question is how?

But how do you cool a volcano? The scientists considered infusing the volcano with vastly more water in the form of an aqueduct. However, that could be a tough sell.

“Building a big aqueduct uphill into a mountainous region would be both costly and difficult, and people don’t want their water spent that way,” Wilcox says. “People are desperate for water all over the world and so a major infrastructure project, where the only way the water is used is to cool down a supervolcano, would be very controversial.”

Instead, NASA proposed bringing the water directly to the volcano by drilling into the rock, and pumping the water straight in. The water would be heated within the rock to more than 600 degrees Fahrenheit. This hot water, once returned to the surface, could power turbines that could generate electric power. This water would be cooled and pumped back into the magma chamber to further cool the volcano.

“Yellowstone currently leaks around 6 [gigawatts] in heat,” Wilcox says. “Through drilling in this way, it could be used to create a geothermal plant, which generates electric power at extremely competitive prices of around $0.10/kWh [kilowatts per hour]. You would have to give the geothermal companies incentives to drill somewhat deeper and use hotter water than they usually would, but you would pay back your initial investment, and get electricity which can power the surrounding area for a period of potentially tens of thousands of years. And the long-term benefit is that you prevent a future supervolcano eruption which would devastate humanity.”

Of course, theory and reality are two different things. Drilling into a supervolcano comes with one very serious risk: triggering the very eruption that the scheme is intending to avoid.

“The most important thing with this is to do no harm,” Wilcox says. “If you drill into the top of the magma chamber and try and cool it from there, this would be very risky. This could make the cap over the magma chamber more brittle and prone to fracture. And you might trigger the release of harmful volatile gases in the magma at the top of the chamber which would otherwise not be released.”

There may be a way to approach it from the lower sides of the supervolcano, outside Yellowstone National Park. This would allow them to extract heat from beneath the magma chamber, thus preventing the heat from ever rising up to the top of the chamber where it poses the most threat, Wilcox said.

“The primary objective … is to gradually defang Yellowstone as a threat to humanity,” Wilcox said.

Not everyone in the scientific community thinks this plan is worth the risks. “It’s pie in the sky right now,”said Dr. Charles Connor, a volcanologist at the University of South Florida in Tampa, “but it’s a great trajectory to think about.”

“Keeping these volcanoes from devastating the human food supply and causing the deaths of 99 percent of all of humanity, that seems like a worthwhile thing to debate,” Wilcox said.

However, even though Connor is not yet sold on the proposed methods, heagreed that something must be done. “These are geological events which are beyond our experience, and humanity’s not prepared to deal with them,” he says. “Honestly, in the case of a super-eruption what else would we do? We have to try geoengineering.”