We Now Know How Some Spiders Are Able to Fly, and, Well, That's Terrifying 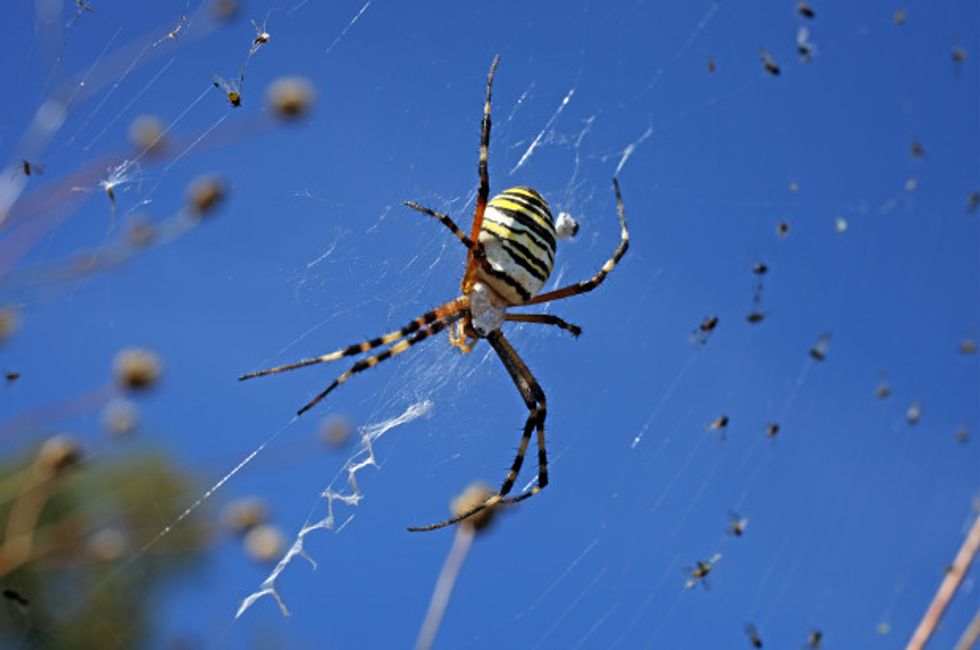 Everyone else ready? OK.

Researchers have determined that spiders can fly. Obviously, these eight-legged arachnids don’t come equipped with wings—despite occasional hoax reports of new species like the winged Volat-Araneus, which does not exist. But spiders do manage to “fly,” up to an incredible thousand miles through the air, by launching themselves into the air and using a strand of their own silk as a parachute.

Add a spark of electricity, and their parachute becomes super-charged and capable of traveling across open water to discover new lands (or just escape a predator or food shortage). Spiders have been seen floating high into the sky and over water, propelling themselves using a technique called ballooning.

The phenomenon was notably observed by Charles Darwin, who walked onto the deck of the HMS Beagle and realized that the ship had been boarded by thousands of tiny red spiders. The ship was 60 miles offshore, so the creatures must have floated over from the Argentinian mainland. “All the ropes were coated and fringed with gossamer web,” Darwin wrote. But he didn’t understand how the feat was done.

Now University of Bristol researchers Erica Morley and Daniel Robert have an explanation. The team found that spiders have the ability to sense electric fields and airflow and take advantage of these forces to travel. Electricity is all around us: In good weather, the air carries a voltage of around 100 volts for every meter above the ground. In foggy or stormy conditions, that can increase to tens of thousands of volts per meter. When spiders let out a strand of silk, it typically picks up a negative charge. This repels negative charges on the surfaces on which the spiders sit, and creates a tiny burst of energy that lifts them into the air.

Spiders can get an even bigger boost by climbing onto twigs, leaves or blades of grass. Like a lightning rod, those plants, rooted to the ground, have the same negative charge as the ground that they grow upon, but they reach into the positively charged air above. The contrast creates substantial electric fields around the tips of the plants.

Taking a closer look at the spiders, the researchers noticed that right before ballooning, the creatures stood on their “tiptoes” and stuck their abdomens out. “That behavior is only ever seen before ballooning,” says Morley. Tiny hairs on the spiders’ legs stood on end, activated by increases in electricity. The spiders lifted their front legs right before liftoff, possibly to test wind strength. “This is really top-notch science,” says physicist Peter Gorham. “As a physicist, it seemed very clear to me that electric fields played a central role, but I could only speculate on how the biology might support this. Morley and Robert have taken this to a level of certainty that far exceeds any expectations I had.”

The spiders climb to a launching point, let out a line of silk, and float away. The physical force of wind, combined with electrostatic forces in the atmosphere, present even under mild weather conditions, allows the spiders to travel. A wide variety of spiders of all sizes take advantage of the technique. Rain does not deter them.

In another study, researchers at the University of Louisville in Kentucky found that spiders don’t just float on the breeze, they can navigate. When the scientists dropped them, the spiders could turn in midair, or glide towards a tree trunk. See for yourself in this video. “You’ll see the spider steering as it goes through the tree,” says study leader Stephen Yanoviak, a tropical arthropod ecologist at the University of Louisville in Kentucky.“If it wants to turn left, it changes the angle of the right front leg. And if it wants to turn right, it does the same with the left front leg. It’s awesome to see them do it. They’re so good at it.”

Maybe slightly less awesome if, say, that spider is hang gliding its way towards you.

The distance a spider can travel depends on atmospheric conditions as well as the spider’s own ability to produce silk, which may depend on the size and type of spider. Scientists are still exploring this process, but there are more than 40,000 arachnid species, and they make about 200,000 types of silk. Individual spiders even produce different types of silk, for different uses. (Check out this spider spinning a line 80 feet long.)

Humans have long been fascinated by this super-strong substance and, incredibly, have even devised ways to extract it from the creatures. The Paris Exposition of 1898 showcased a set of bedding made from spider silk extracted by a machine, wound on bobbins, and woven into fabric by French missionary Jacob Paul Camboué. In Madagascar, a rare textile made from the silk of more than a million wild spiders was displayed at the American Museum of Natural History in New York City. Spider farmers extracted up to 500 yards of silk each from a set of 24 golden orb spiders to make fabric used a replica of that original machine. It’s a little tricky to find the right people for the job of spider handler, however.

"We had to find people who were willing to work with spiders," said Nicholas Godley, who co-led the project with textile expert SimonPeers, "because they bite."