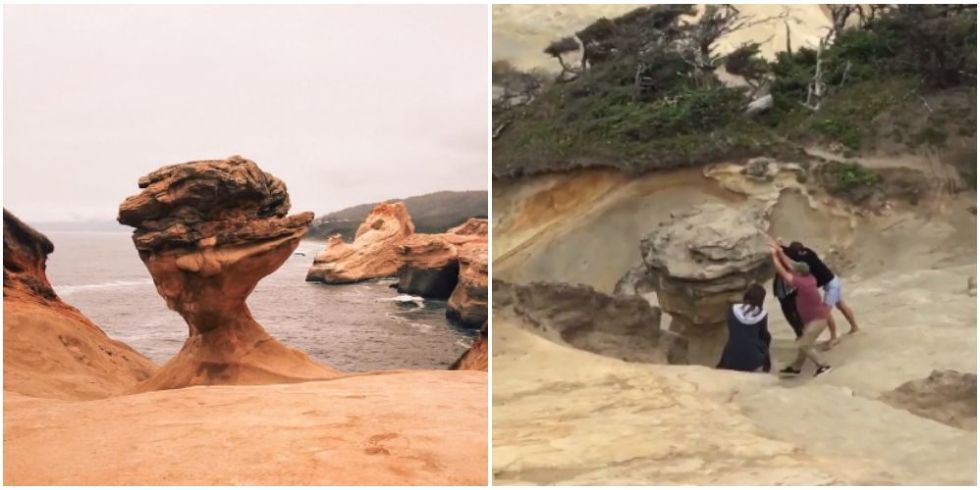 For years, a 7-foot tall sandstone pedestal at Cape Kiwanda, Oregon, was a popular tourist attraction for its uncanny likeness to a duck's bill. When Oregon State Parks Department workers discovered that the Duckbill collapsed last week, they initially believed that age and gravity had finally taken its toll on the landmark, which many visitors used as a spot to practice yoga or take wedding photos despite its being fenced off from the public. Then a video emerged: Vandals had destroyed the rock formation.

David Kalas, a drone operator, captured the footage after he noticed a group of people trying to topple over the Duckbill. Kalas told reporters that at first, he laughed to himself because he believed "there was no way that they could knock it down." But then, he said, "I noticed that it started wobbling, and then I started to record it as two of the guys managed to knock it down." Kalas began to record the incident on his cell phone and caught the exact moment the Duckbill collapsed.

Afterward, Kalas confronted the group. “I asked them, you know, why they knocked the rock down, and the reply I got was: Their buddy broke [his or her] leg earlier because of that rock," he said. "They basically told me themselves that it was a safety hazard, and that they did the world or Oregon a favor.”

The Oregon State Police will work with the Parks Department to determine whether to file charges once the culprits are identified. Breaking park rules is not considered a crime: It's a violation that carries a $435 fine. However, authorities charged a pair of Boy Scout leaders with criminal mischief for a similar incident in Utah in 2014 after park officials suggested they broke the law by defacing a state park.

Chris Havel, associate director of the Oregon Parks and Recreation Department, told reporters that the area where the Duckbill collapsed had been fenced off from the public for decades because the sandstone is unstable. “People regularly cross the fence, ignore the warning signs, and go where they shouldn’t. That is a continuing problem at the park," he said. Havel noted that while many have responded to the news with outrage, he hopes the incident serves as a stark reminder of the impact of human interference on the environment. “Every person that set foot on that rock has worn it down a bit,” he said. Those people “may be outraged that somebody pushed the rock over... but likewise, every person who put their feet on that rock hastened its demise. And they should reflect on that the next time they want to go do something similar."