U.S. One of Just Four Nations to Block Endorsement of a Landmark Climate Study at a Global Climate Change Conference, and We Are Not in Good Company 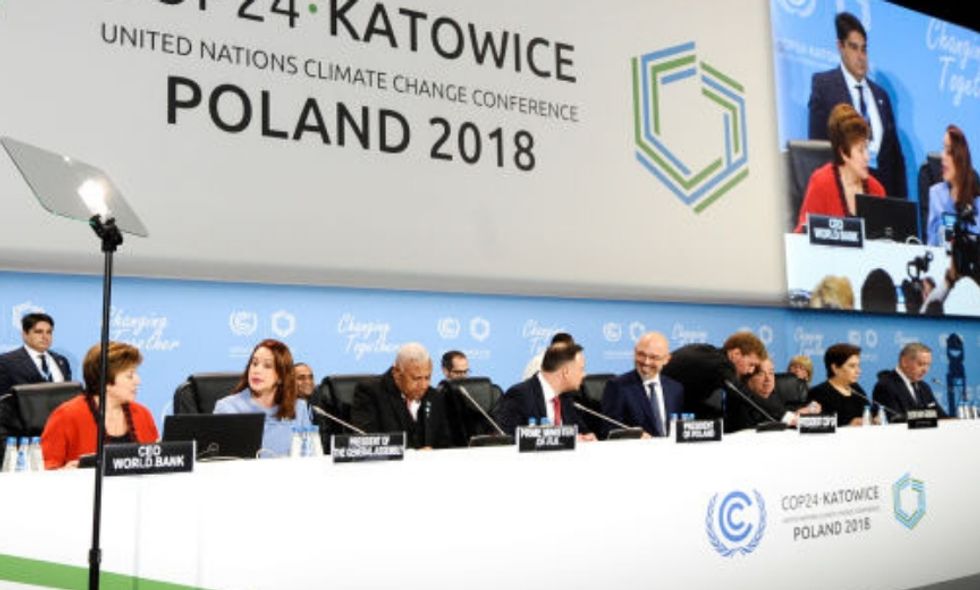 Dignitaries and guests are seen gathered for the opening of the Climate Change Conference COP24 in Katowice, Poland on December 3, 2018. The Katowice Climate Conference has been deemed especially important for its role in the finalisation of the practical agreements of the 2015 Paris Climate Accord and the fact that the World Meteorological Association has issued a dire warning on damage caused by climate change since the last conference. (Photo by Jaap Arriens/NurPhoto via Getty Images)

On Saturday, at the U.N. Climate Change Conference in Katowice, Poland, the United States, along with Russia, Saudi Arabia and Kuwait, acted to block the endorsement of the IPCC's recently released landmark climate change report.

The report notes the urgency of Earth's climate crisis, laying out the imminent impact of rising temperatures as well as guiding policymakers on how to offset the impact.

By this point, the scientific community is virtually unanimous on the need to address climate change and Americans agree that policy changes to slow the impacts are not only sensible, but vital.

For this reason, Americans found it maddening that the United States joined the small chorus of voices refusing to edorse the report, with the State Department saying

Many had a problem with the U.S. taking the side of Russia, Saudi Arabia and Kuwait.

@CNN When the US joins Russia, Saudi Arabia and Kuwait, three non-democratic countries, you know that something is… https://t.co/JjkGaCkd5G
— William M. Andrews (@William M. Andrews) 1544446415.0

Gee, when these are team members, what does it say about your team? I hope mar-a-Lago gets flooded/ "the United Sta… https://t.co/wIRphZL9ZD
— Kendall Thiessen (@Kendall Thiessen) 1544449276.0

Under Trump, instead of leading the world to act on climate change, the United States joined with Russia and Saudi… https://t.co/MdmMFm7twZ
— Rob Hogg (@Rob Hogg) 1544393388.0

Many saw the action as just another facet of an administration that's long combated sensible climate policy in exchange for oil and coal.

Many called out President Donald Trump's unyielding devotion to oil and gas.

Golly, one would think they all have vested interests in selling oil, the more the better! "United States joined a… https://t.co/HPytOfoXLL
— Nuke Submariner (@Nuke Submariner) 1544403151.0

If you follow climate and oil politics, then you know the US, Russia, and Saudi are the big 3 producers of both fos… https://t.co/4UHuc4ExPw
— SlowMoney Green (@SlowMoney Green) 1544407137.0

The Trump administration's inaction has worsened domestically as well. The President publicly doubted the conclusions reached by 13 agencies of his own government in the Fourth National Climate Change Assessment, which also warned of the urgent need for action lest the United States economy decrease by 10%.

“You’re going to have to have China, and Japan, and all of Asia, and all of these other countries – you know, [the report] addresses our country. Right now, we’re at the cleanest we’ve ever been, and that’s very important to me. But if we’re clean but every other place on Earth is dirty, that’s not so good. So, I want clean air, I want clean water – very important.”

Fortunately, future Democratic lawmakers are gearing up in an effort to save the planet from the President. Incoming Democratic Representative from New York's 14th District, Alexandria Ocasio-Cortez, has made passing sweeping climate change reforms - or a Green New Deal - her top priority, and support for the effort within the House of Representatives is quickly building.

Let's hope that Republican support for these efforts rises before the tides do.