Far beyond the estimated range of recent ice age-warming cycles. 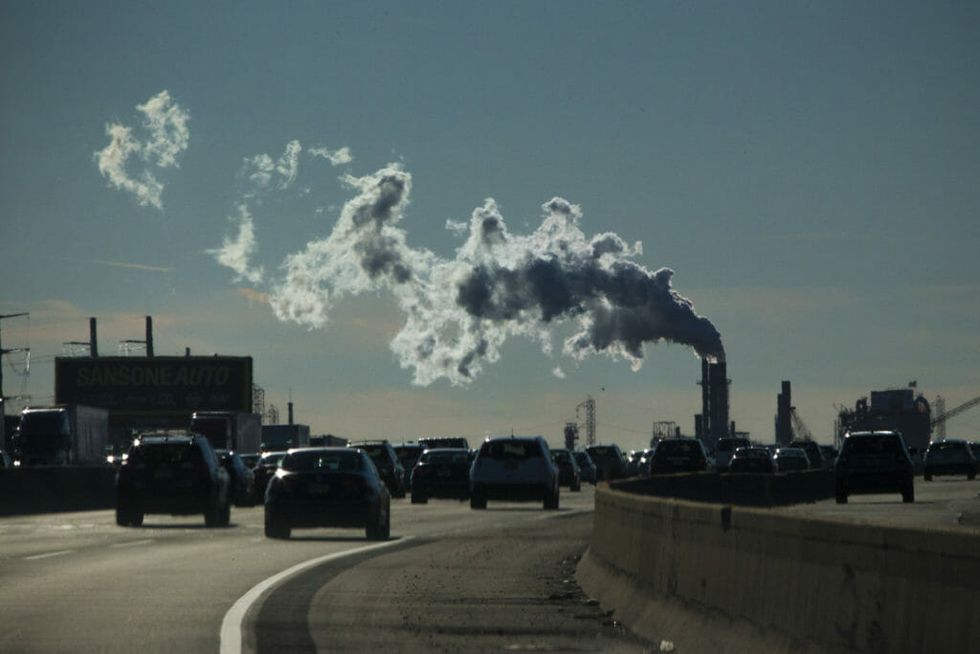 CARTERET NEW JERSEY, NJ - NOVEMBER 17: Vehicles move along the The New Jersey Turnpike Way while a Factory emits smoke on November 17, 2017 in Carteret, New Jersey. The United States is still contributing to the global greenhouse gas emissions as the Trump Administration has dismantled the U.S. foreign-policy to reduce carbon pollution. (Kena Betancur/VIEWpress/Corbis via Getty Images)

The World Meteorological Organization (WMO), a specialized agency of the United Nations, reports that carbon dioxide levels surged at a “record-breaking speed” in 2016. Their report indicates carbon dioxide concentrations rose to 403.3 parts per million (ppm) in 2016, up from 400 ppm in 2015, reaching levels of CO2 saturation in the earth’s atmosphere not seen in 3 to 4 million years. This growth pushes our climate’s atmosphere further outside the range of 180-280 ppm estimated for recent cycles of ice ages and warmer periods.

Petteri Taalas, Secretary-General of the WMO, issued the warning at the organization’s annual Greenhouse Gas Bulletin, held in Geneva on October 30. The bulletin states that today’s CO2 concentration of over 400 ppm exceeds the natural variability seen over hundreds of years.

“We have never seen such big growth in one year as we have been seeing last year in carbon dioxide concentration,” said Mr. Taalas.

Secretary-General Taalas also told journalists that it is past time for governments to fulfill the pledges they made at the 2015 United Nations Framework Convention on Climate Change (UNFCCC) in Paris. It was there and then that representatives from 195 countries, including the United States at the time, signed the Paris Climate Agreement, promising to take steps to reduce global warming.

But in the two years since that promise was made, the world has continued to step in the wrong direction.

Last year’s CO2 concentration growth rate was 50 percent faster than the past decade’s average, driving levels 45 percent above calculated pre-industrial levels. The potential of this carbon dioxide increase could lead to a 20-meter rise in sea levels, and add an average of three degrees to temperatures around the world.

The WMO bulletin states that human-produced CO2 emissions from sources such as coal, oil and deforestation rose to a new record in 2016. Furthermore, scientists have observed a direct correlation between these rising ppm leading to both a rise in temperatures and a rise in sea levels, due to melting ice. But the situation is far worse than a new record high, as these increases are accelerating at an alarming rate.

“The rate of increase of atmospheric carbon dioxide (CO2) over the past 70 years is nearly 100 times larger than that at the end of the last ice age. As far as direct and proxy observations can tell, such abrupt changes in the atmospheric levels of CO2 have never before been seen,” the bulletin reports. This escalation in CO2, as well as other greenhouse gases methane and nitrous oxide, to a lesser extent, has caused a 40 percent in the global warming effect since 1990.

Oksana Tarasova, Chief of Atmospheric Environment Research Division at WMO, explains that these drastic atmospheric changes are occurring way too fast. Changes that used to take 100 to 200 years before the industrial era are now happening over the course of just one decade. “What we are doing now with the atmosphere is 10 to 20 times faster than has ever been observed in the history of the planet,” says Tarsova.

These relatively fast atmospheric changes and rising global temperatures will lead to more extreme weather events around the world.

Both the WMO report as well as the Emissions Gap Report by the United Nations Environment Programme (UNEP) served as a scientific base for policy-making and discussion at the 23rd annual (UNFCCC) in Bonn, Germany, which just finished its two-week session last month. The UNEP report tracks how governments are taking steps to reduce greenhouse gas emissions.

At the conference, environment ministers and diplomats from around the world negotiated the finer details of how to make the promise of Paris Climate Agreement a reality. President Trump has already verbally pulled the United States out of the agreement, going into effect in 2020. Now that Syria has signed the agreement, the U.S. is the only country in the world not to support the framework deal to combat greenhouse gas emissions.