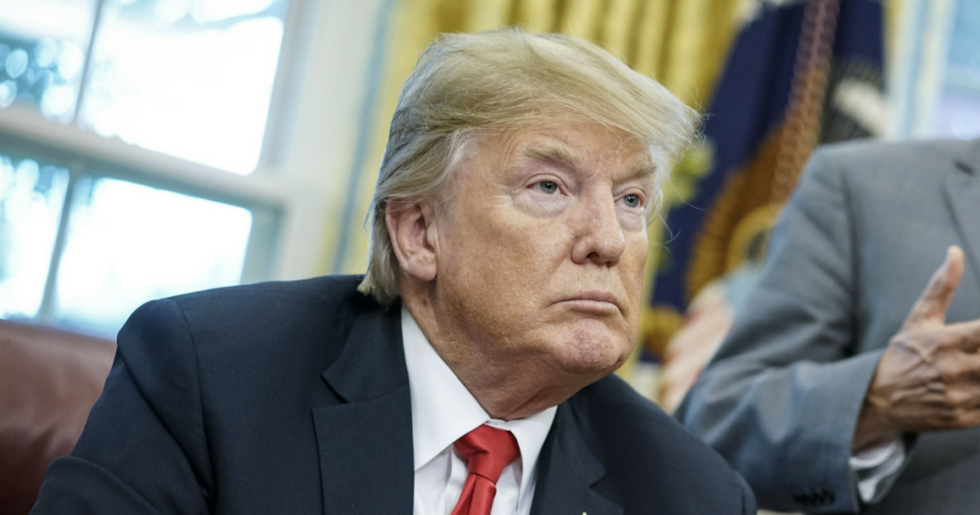 US Vice President Mike Pence speaks as US President Donald Trump looks on before signing an executive order on immigration in the Oval Office of the White House on June 20, 2018 in Washington, DC. - US President Donald Trump on Wednesday signed an executive order aimed at putting an end to the controversial separation of migrant families at the border, reversing a harsh practice that had earned international scorn.'It's about keeping families together,' Trump said at the signing ceremony. 'I did not like the sight of families being separated,' he added. (Photo by Mandel Ngan / AFP) (Photo credit should read MANDEL NGAN/AFP/Getty Images)

Trump's decision puts corporate profits ahead of the need for environmental conservation at a time when climate change and oceanic dead zones are becoming a greater threat to civilization and wildlife.

The president's executive order focuses on energy production, fishing, and national security, which the EO states are "foundational to the economy, security, global competitiveness, and well-being of the United States. "

Goods and materials that support our economy and quality of life flow through maritime commerce.  Our fisheries resources help feed the Nation and present tremendous export opportunities.  Clean, healthy waters support fishing, boating, and other recreational opportunities for all Americans.

Trump's executive order is a reversal of one signed by President Barack Obama in the wake of the Deepwater Horizon oil rig explosion in 2010. It aimed at protecting the world's marine life and oceanic chemistry, which climate change is actively disrupting.

America’s stewardship of the ocean, our coasts, and the Great Lakes is intrinsically linked to environmental sustainability, human health and well-being, national prosperity, adaptation to climate and other environmental changes, social justice, international diplomacy, and national and homeland security.

Trump's order "downplays an Obama administration emphasis on creating robust data collections that could help managers make decisions, and on encouraging state and federal agencies to collaborate on plans that would guide marine development, conservation, and other activities," writes Science.

Nowhere in Trump's executive order do the words “conservation,” “stewardship” or “climate change" appear, nor does the president reference ongoing, man-made threats to the oceans which include acidification, dead zones, or the bleaching of coral reefs, such as Great Barrier off the coast of Australia.

Environmental groups were quick to call out Trump on what they say is an irresponsible move that leaves Earth's oceans susceptible to additional man-made damage.

“Every decision involving the ocean also affects fish, wildlife and water quality with resulting costs or benefits for coastal communities, fisheries, and tourism,” she said in a statement. “We need strong national policies to help restore our fisheries and protect our oceans.”

Savitz also emphasized the importance of supporting alternatives to oil, such as offshore wind farms, because of the "devastation that comes with oil spills."

To promote our nation’s energy security, the National Ocean Policy should promote the responsible development of renewable offshore wind and reject dirty and dangerous offshore oil drilling. Offshore wind will provide clean energy forever, while oil and gas are finite resources that run out and threaten our nation’s thriving clean coast economy. Coastal communities rely on a healthy and sustainably managed ocean for their livelihoods and way of life, and cannot afford the devastation that comes with oil spills.

Oceana urged Trump to rely on science, not economics, to form his environmental policies.

We reject the administration’s false argument that federal management of the oceans prevents their productive and sustainable use. Strong and effective regulations lay out ‘rules of the road’ that safeguard our health, safety, and natural resources. These safeguards play an essential role in balancing the interests of private users of the oceans with the broader need for conservation of ocean resources for all Americans. We urge President Trump to change course and to support science-based policies to ensure that healthy and productive oceans will support abundant fisheries, coastal recreation and economic prosperity for generations to come.

Pushback to the executive order also came from members of Congress. Senator Ed Markey (D-MA) tweeted that the Trump administration is "doing everything it can to allow another BP oil spill."

Others weighed in on social media as well. "The offshore drilling is about money," one user wrote. "This administration doesn't give priority to the environment!"

@SenMarkey The offshore drilling is about money. This administration doesn't give priority to the environment!
— Judy (@Judy) 1529518301.0

Democratic Michigan Senator Debbie Stabenow vowed to fight the administration if they attempt to drill for oil in the Great Lakes. "I am not going to stop now!" she tweeted. "There will be NO drilling in our lakes!"

With a new executive order, the Trump Administration may be trying to open our waters for drilling. I've fought for… https://t.co/655Yo6pmiT
— Debbie Stabenow (@Debbie Stabenow) 1529519634.0

"The executive order removes any mention and prioritization of understanding and addressing the effects of climate change on the ocean and its related communities," said Sally Yozell of The Simson Center, a think tank that promotes global peace.

David Hayes, Executive Director of the State Impact Center, which fights rollbacks of environmental protections, said: "Trump's new executive order is notable in its bland, backward-looking approach to the oceans...This is exactly the wrong time to shut down the prior Administration's call to action to address these serious issues."

Last June, also during National Ocean Month, Trump withdrew the United States from the Paris Climate Accord, which 200 nations had joined as part of a global effort to reduce carbon emissions and prevent Earth's temperature from rising more than two degrees Celsius. Scientists say that global warming beyond that threshold is a "point of no return."