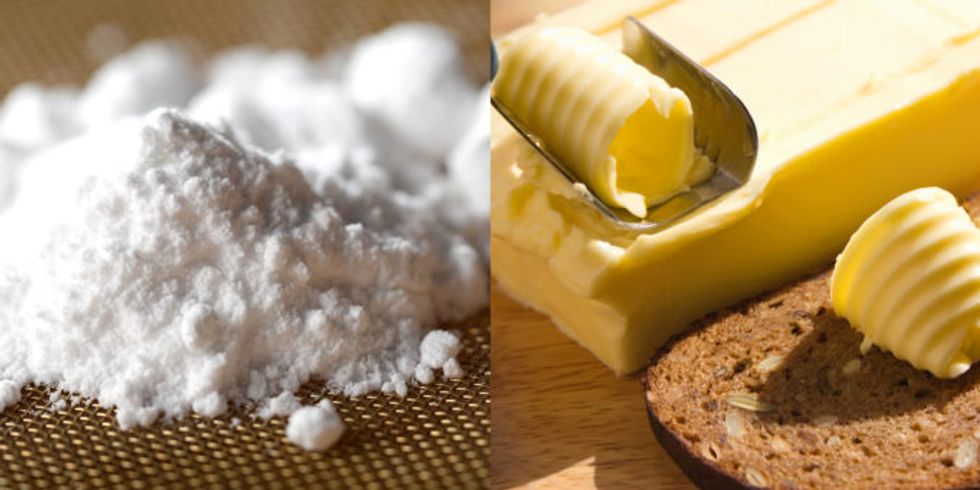 New research published in the American Medical Association’sJAMA Internal Medicine found that scientists were paid by the sugar industry in the 1960s and 70s to downplay sugar’s (sucrose) health risks. Research fellow Cristi Kearns, of University of California, San Francisco, reviewed more than 1,500 internal documents, memos, reports and studies commissioned in the 1960s by the Sugar Research Foundation (SRF), now the Sugar Association.

The documents reveal that the SRF paid three Harvard scientists tens of thousands of dollars to publish a review of sugar, fat and heart research in 1965 in the New England Journal of Medicine, with hand-picked studies that minimized the link between sugar and heart health, and vilified saturated fat and cholesterol.

In fact, fat has provided the perfect scapegoat and smokescreen for the sugar industry, which capitalized on the negative health risks of fat, while discrediting the science that connects sugar intake with cardiovascular and metabolic health problems.

One of the Harvard scientists, D. Mark Hegsted, later became the head of nutrition at the U.S. Department of Agriculture, where in 1977 he helped draft a paper, “Sugar in the Diet of Man,” that would be influential to the federal government’s dietary guidelines. Another scientist was Fredrick J. Stare, chair of the Harvard University School of Public Health Nutrition Department, whose department accepted millions of dollars from sugar producers and beverage companies including Coca-Cola, Carnation, Kellogg and Gerber. Interestingly, Stare went on to help the tobacco industry fund research “aimed at exonerating cigarettes as a cause of heart disease.”

Kearns, who has been researching the sugar industry’s less than transparent practices for years, told Second Nexus, “When you get down into the details of the critiques, the [SRF study] authors applied double standards when they talked about the evidence related to fat

content in the diet versus sugar content of the diet.” She feels, based on their own words and treatment of the evidence, that the SRF researchers “treated the sugar evidence differently than they treated the fat evidence.”

Kearns found that the sugar-funded scientists interpreted data from the NIH to their own benefit: “NIH scientists found that we aren’t all the same; people with high cholesterol maybe should reduce the fat in their diets, whereas people with high triglycerides should maybe reduce the sugar in their diets.” The NIH scientists were advocating for physicians to screen patients based on those risk factors and give different advice based on what group you fell into. “Instead, everyone got the same advice to reduce the fat, reduce dietary cholesterol and add in polyunsaturated fats. Our article is not saying that the fat evidence is wrong; we’re just saying that the reviewers treated the evidence differently.”

While she says she can’t say for sure whether or not they did so due to pressure from the sugar industry or if these were the researchers’ unbiased conclusions, there’s plenty of other evidence that suggests the Sugar Association was doing everything it could to hire researchers who were sympathetic to their cause. In fact, it has successfully influenced even the FDA’s dietary guidelines over more than five decades.

The first early warning signals of sugar’s relationship to coronary heart disease (CHD) were reported in the 1950s, but were corroborated in a June 1965 study in the Annals of Internal Medicine, indicating a direct correlation between sucrose and CHD. On July 11, 1965, the New York Herald Tribune ran a full-page article of the results of Annals articles stating that the research “threatened to tie the whole business [of diet and heart disease] in a knot.” Sugar sales limped along as Americans attempted to be health conscious. Promptly, the SRF sponsored its first CHD research project in 1965, allegedly to research these findings that sugar was linked to CHD. When its published its literature review in the New England Journal of Medicine, unsurprisingly, it vilified fat, and minimized evidence of sucrose as a risk factor.

Scientists On the Take?

While working on a 2007 Mother Jonesexposé with co-author Gary Taubes, author of Why We Get Fat, and Good Calories, Bad Calories, Kearns discovered that the Harvard scientists were not the only researchers to receive Sugar Association money. However, an expert on

the effects of sugar and carbohydrates on health, Richard Feinman, professor of cell biology at SUNY Medical Downstate, in New York, is not convinced of “malfeasance” on the part of the Harvard researchers in the 60s and 70s. While he agrees that fat was vilified and sugar given a pass, he says, “We are looking for scapegoats and the main scapegoat is sugar. The truth of the matter is that [the Sugar Association] did whatever it could to push its product. Its behavior was in many cases, questionable, but it’s not blatantly unethical.”

In regard to whether the scientists working for the SRF were “on the take,” he adds, “I believe they believed the message and that’s why they felt comfortable taking the money. In other words, it’s not so much that sugar influenced the outcome, as it is that the people who believed in this outcome took the money from sugar.” He points to the fact that in order to get National Institutes for Health (NIH) research money, which is the biggest source of funding for most medical research, “you have to study what they want.” At the time, it was the “diet-heart hypothesis.” However, Feinman does think the researchers engaged in “bad science,” but not “falsifying data.”

Yet, as Kearns and Taube wrote for theirMother Jones article, the consequences of this bad science were enormous: “With an initial budget of nearly $800,000 collected from the makers of Dixie Crystals, Domino, C & H, Great Western and other sugar brands, the association recruited a stable of medical and nutritional professionals to allay the public’s fears, brought snack and beverage companies into the fold, and bankrolled scientific papers that contributed to a “highly supportive” FDA ruling which…made it ‘unlikely that sugar will be subject to legislative restriction in coming years.’”

Several of the most influential researchers funded by the Sugar Association would go on to do the very research that informed the FDA’s own guidelines. William Connor, a nutritionist from the University of Oregon, was one of the most vocal proponents that fat, not sugar, caused heart disease. Edwin Bierman, a researcher from the University of Washington “recommended that diabetics did not have to watch their sugar intake so long as they

burned off the calories they consumed,”wrote Kearns and Taube. Birman coauthored a section on potential causes for a National Commission on Diabetes report in 1976 which influences the federal diabetes research agenda to this day.”

The sugar industry’s campaign was powerfully effective. By the late ‘70s the American Heart Association and the American Diabetes Association gave sugar their stamps of approval for inclusion in a healthy diet. By the late 1980s, little research was even being done on sugar any longer, and other sweeteners such as high-fructose corn syrup were on the rise.

The Sugar Association did not return our phone calls but posted a statement on their website in regard to Kearns’ JAMA study, stating that while they “acknowledge that the Sugar Research Foundation should have exercised greater transparency in all of its research activities … transparency was not the norm they are today.” They disparage Kearns’ work saying, “We question the author’s continued attempts to reframe historical occurrences to conveniently align with the currently trending anti-sugar narrative, particularly when the last several decades of research have concluded that sugar does not have a unique role in heart disease.”

Whether or not sugar’s role in heart disease is unique, as the press release states, further evidence of links between sugar and health continues to shoulder its way past the sugar industry gatekeepers. A 2014 study in JAMA Internal Medicine stated “Over the course of the 15-year study, participants who took in 25% or more of their daily calories as sugar were more than twice as likely to die from heart disease as those whose diets included less than 10% added sugar,” another study from the American Diabetes Association found a link between excessive intake of sugar-laden beverages and metabolic syndrome and Type 2 Diabetes. Even the Federal government’s most recentdietary guidelines include reducing sugar intake. According to a 2011 article titled “Is Sugar Toxic?” by Gary Taubes, published inthe New York Times, Robert Lustig, an expert on pediatric obesity at the University of California, San Francisco, is quoted as saying, “sucrose and HFCS are addictive in much the same way as cigarettes and alcohol, and that overconsumption of them is driving worldwide epidemics of obesity and type 2 diabetes.”

Despite this, the Sugar Association continues to deny a connection between sugar and heart condition.