For One Endangered Sea Turtle Species, Rising Temperatures Could Mean the Path to Extinction

Rising temperatures are making it impossible for some turtle species to produce males. 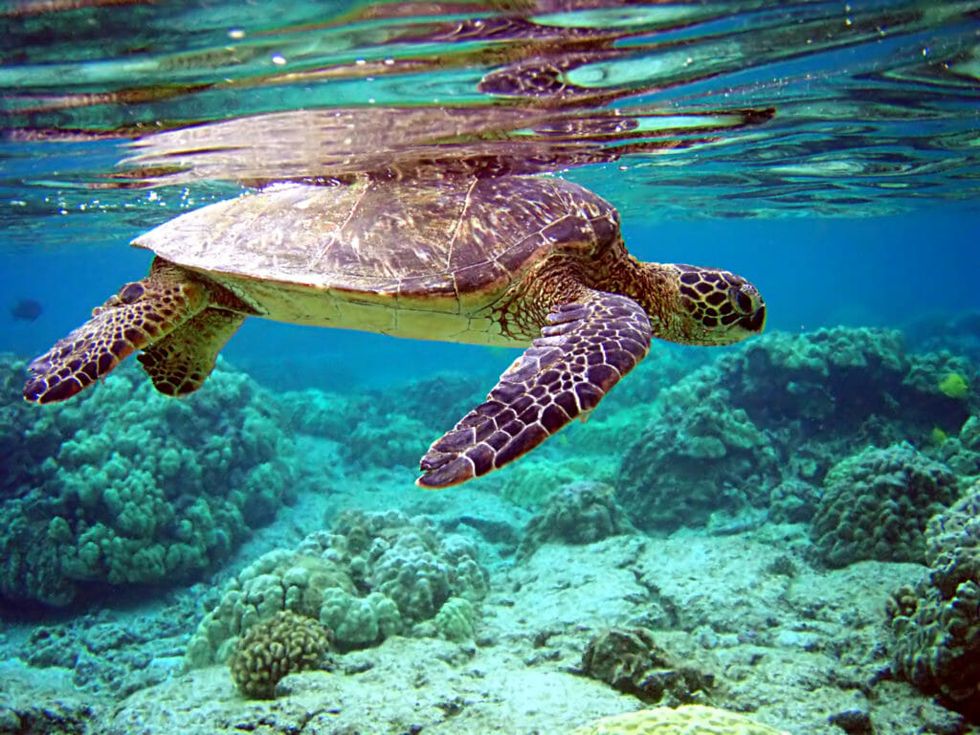 Want to know which species will go extinct in the near future? One way to predict the crash of a population is to take a headcount of a species’ latest arrivals. When researchers checked in on the endangered Pacific green sea turtle, which nests in only two places, on the northern and southern ends of Australia’s Great Barrier Reef, they were surprised to find that the next generation is almost entirely female. That’s not good news for future breeding activity.

The gender of many reptiles is determined by how warm the egg is when incubated. In the case of the sea turtles, the temperature of the sand the eggs are buried in triggers gender development. Very small temperature differences can tip male-female ratios in either direction, and researchers suspected that rising global temperatures might have an impact on this population. The area has already seen widespread coral bleaching due to rising sea temperatures around the Great Barrier Reef. "Within a few degrees Celsius you go from 100 percent males to 100 percent females," says marine biologist Michael Jensen, who was part of a team studying the turtles in a survey published in Current Biology. "A really narrow range, that transition."

2017 was one of the hottest years on record, ranked as the second-warmest by NASA and third-warmest by the National Oceanic and Atmospheric Administration.

The scientists studied the turtles in its two breeding grounds — a larger population from the warmer northern Great Barrier Reef, and a smaller population from a cooler area about 1,200 miles to the south. The population that hatched in the cooler area is about 69 percent female. In the warmer north, more than 99 percent of juvenile and young adult turtles are female. In the past 20 years, the population has changed from one male for every 6 females to 1 male for every 99 females. While males can breed with more than one female, the long-term health and genetic diversity of the population is now significantly at risk. The researchers say a "complete feminization” of this population may be coming, although not immediately, as it takes 25 years for the turtles to reach maturity.

"What we are concerned about is when the cohort of young female turtles become adults,” said study coauthor Camryn Allen, who is now looking for ways to cool the turtle eggs to produce more males. “Will there be a male for them to mate with?"

Feminization of turtle population is occurring around the world. Green turtles in San Diego, leatherback turtles in Costa Rica, loggerheads in Florida, and West African turtles are also experiencing feminization of the population. “I haven’t found a male hatchling in three years,” said JeanetteWyneken, a biological sciences professor at Florida Atlantic University who has been studying the population of loggerheads since 2002, and who directs the university’s marine biology lab at Gumbo Limbo Nature Center in Boca Raton.

Climate change is impacting turtles in other ways as well. Rising sea levels are causing nesting sites to flood, wiping out entire generations of hatchlings. Spikes in temperatures can cause eggs to cook in their nests. Even the adults are struggling; beach erosion is creating small “cliffs” that cause turtles to tip over and, unable to right themselves, die.

Biologists say our planet is now in the “sixth mass extinction” period, an era in which plant, animal, insect and other life forms are going extinct in mass numbers. It’s the most extensive loss of biodiversity since the dinosaurs went extinct 65 million years ago.

Extinction can be a natural phenomenon, and a natural “background” extinction rate of about one to five species per year is normal. However, scientists estimate that we're now losing plant, insect and animal species at 1,000 to 10,000 times the background rate, with literally dozens going extinct every day. The cause: Us. Human activities are causing massive habitat loss, overhunting and overfishing, toxic pollution throughout the food chain, the introduction of destructive invasive species, and climate change, which is having profound effects on the behavior and health of wildlife species.

In 2017, we lost numerous unique creatures forever, including an Australian bat called the Christmas Island pipistrelle, the fishing cat of Indonesia, a snail from Georgia called the Beaverpond Marstonia, and two amphibians, the blue-tailed skink and Lister’s gecko.

Extinction can be hastened by an event, such as the meteor that wiped out the dinosaurs, or by behavior, such as the hunting practices that led to the extinction of the passenger pigeon — we literally killed them all. Today, we have more information about the factors that lead to extinction, but this knowledge isn’t inspiring humans to stop the behavior that is causing the problem.

“The resulting biological annihilation obviously will have serious ecological, economic and social consequences. Humanity will eventually pay a very high price for the decimation of the only assemblage of life that we know of in the universe,” said Paul Ehrlich, one of the authors of a study published in the peer-reviewed journal Proceedings of the National Academy of Sciences, that details the massive loss of wildlife currently underway around the planet.

They say, while action to halt the decline remains possible, the prospects do not look good: “All signs point to ever more powerful assaults on biodiversity in the next two decades, painting a dismal picture of the future of life, including human life.”

As for turtles, they are one of the planet’s most ancient species, and they not only lived through the dinosaur era, they survived it, and the Ice Age and other hot periods. “They have some ability to adapt and respond,” said Wynecken.

“But we don’t know if they enough resilience to respond now.”

In other words, if we can’t keep temperatures from rising further, in about 20 years, when today’s young female turtle hatchlings are ready to start a family, they may be out of luck. There will be no males left with whom to mate.