One Bite from the "Lone Star Tick" Could Mean No More Red Meat for You Ever.

This tick, distinguished by its Texas shaped white smudge, has continued to baffle researchers. 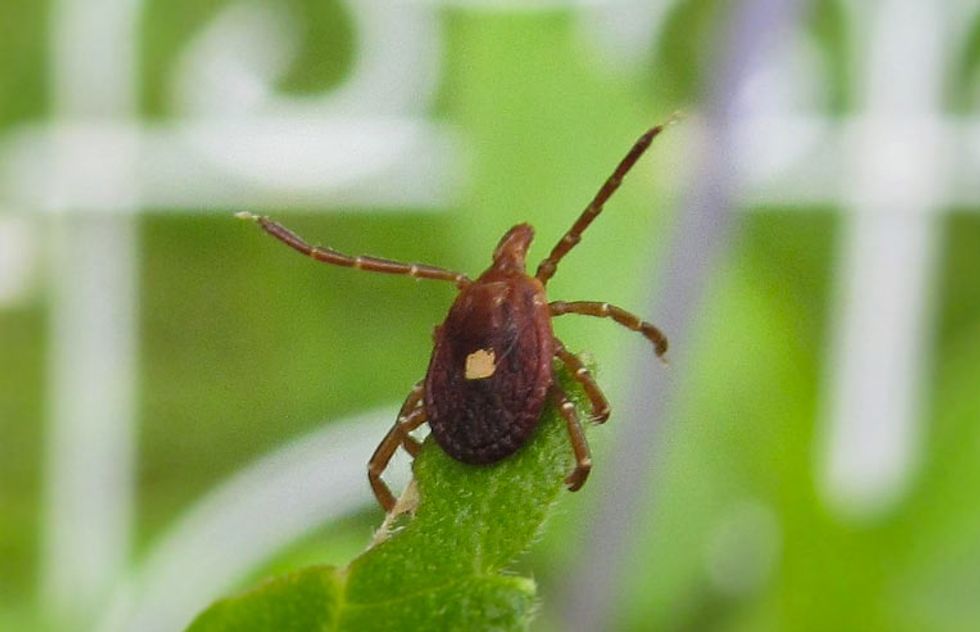 It’s a story right out of a Stephen King novel: One morning you go out for a nice hike in the hills and the next, you end the day nearly dead from a cheeseburger. With just one bite from a lone star tick, you could develop a life threatening meat allergy.

As if the more common tick-borne illness, Lyme disease, weren’t enough of a worry, the lone star tick, so named for its Texas shaped white smudge, has a horrible and baffling way of triggering the human immune system to react adversely to a sugar molecule that’s found in red meat. Galactose-alspha-1, 3-galactose, shortened toalpha-gal, can make you deathly ill.

An as of yet unidentified substance in the tick’s saliva attaches itself to alpha-gal in the human body, which causes the immune system to produce massive amounts of histamines whenever so much as a morsel of red meat passes through a bitten person’s lips. This is anaphylaxis: symptoms can range from intense itchiness to terrible stomach cramps, low blood pressure, trouble breathing and yes, even death.

For some folks, however, the effects are not immediate, which can make it hard for people to make the connection to their tick bite.

There's a time delay in the reaction," saysCosby Stone, an allergy and immunology fellow at Vanderbilt University."It [the Alpha-Gal] has to first travel through your gastrointestinal tract to be released. Hours later, patients wake up with hives, shortness of breath, vomiting, and diarrhea."

On rare occasions, patients have been admitted to intensive care. "Some patients have had to be given life support because their blood pressure is so low that they're in imminent danger of dying," said Stone.

However, most patients experience several allergic reactions before they make the connection between their diet and the reaction. And the more tick bites from an infected tick, the worse the reactions can be over time.

The way in which researchers discovered the cause of this rare allergy is a testament to scientists’ powers of observation. At the University of Virginia (the state of Virginia is one of the lone star tick’s territories), immunologist Thomas Platts-Mills heads a well-known allergy research department. In his years of studying the power of histamines, he’d heard stories of these alleged meat allergies dating to at least the 1990s. It wasn’t until 2004, however, that another group of patients exhibiting similar symptoms came to his attention. These patients experienced itching, swelling, and dangerously low blood pressure. They were all taking a cancer drug called Cetuximab.

Platts-Mills reached out to Cetuximab’s distributor, biopharmaceutical company Bristol-Myers Squibb, to examine blood samples from patients exhibiting the telltale symptoms. To his surprise, the patients who had developed allergic reactions had pre-existing antibodies to alpha-gal. It turned out that Cetuximab contained alpha-gal derived from genetically modified mice.

But this finding still didn’t answer why some patients were extra sensitive to alpha-gal. Platts-Mills began a geographic search to see if he could find an overlap between Cetuximab patients and those who had reported having meat allergies. Bingo. He was able to pinpoint an area with a significant number of cases of Rocky Mountain spotted fever—another one of the lone star tick’s nasty diseases.

As fate would have it, Platts-Mills and two members of his lab acquired the tick-induced meat allergy as well, which helped lead them to the connection they’d been seeking.

Over the next few years, Platts-Mills and his colleague Scott Commins screened as many patients with meat allergies as possible. They found that an alarmingly high number of them––80 percent––had been bitten by a tick. Even more astonishing, those with tick bites showeda 20-fold increase in alpha-gal antibodies. The researchers’ ethical standards did not allow them to attach ticks to patients, so self-reported data is the only thing they have to go on in determining the cause of the meat allergy.

So far the tick has predominantly kept near its namesake, Texas, and the nearby southeastern United States. However, it has started to turn up in a slew of other states including Minnesota, New Hampshire, Ohio and eastern Long Island, New York. Increasingly warmer temperatures seem to make ticks proliferate, says Stone.

Because the Centers for Disease Control (CDC) have not monitored the alpha-gal allergy, there isn’t a central record of its rise.

"Five years ago, we probably had about 50 or so patients that had Alpha-Gal [syndrome]. Now we have about 200," said Stone.

Stone does acknowledge that "It's also possible that because allergies in general are going up, reactions to Alpha-Gal are increasing."

Researchers have a long way to go to understand the mechanism of the reaction and to identify the specific agent in the tick’s saliva which causes the alpha-gal response. Commins is now studying the effects of the lone star tick on at the University of North Carolina, injecting mice with lone star tick extracts to try to understand which of the ingredients in tick saliva might be the culprit. For all they know, it might not even be the tick’s saliva itself, but a bacteria, virus or other microbe living within it.

Meanwhile, there is no cure. The best you can do if you’re an outdoorsy type is keep your anti-histamines handy, and if you have a reaction to red meat, request an EpiPen, and perhaps invest in some vegetarian cooking classes.