What Happens When an Iceberg the Size of Delaware Breaks Off from Antarctica? 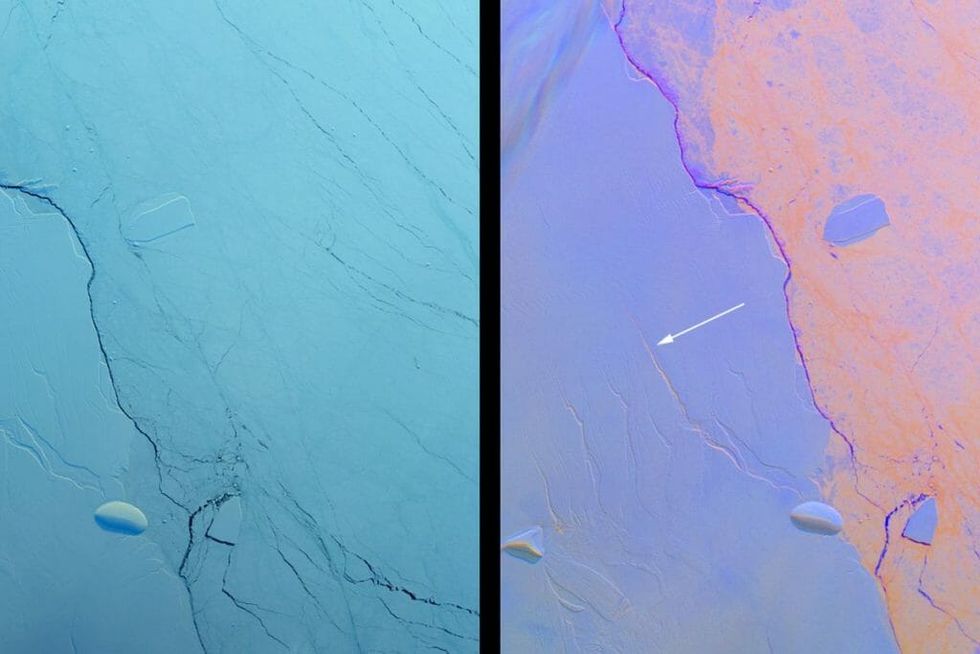 Scientists from Project MIDAS. a UK-based research team, have confirmed that an iceberg roughly the size of Delaware has split from the Antarctic Peninsula. The researchers had monitored a break in the Larsen C ice shelf following the collapse of the Larsen A ice shelf in 1995 and had observed the rift gradually widening from late 2014 to January of this year. The split of a 2,239 square mile section of Larsen C occurred between Monday and Wednesday, according to thermal infrared images from NASA's Aqua MODIS satellite.

"We have been anticipating this event for months, and have been surprised how long it took for the rift to break through the final few kilometers of ice," Professor Adrian Luckman of Swansea University, the lead investigator of the MIDAS project said in a statement.

Professor Luckman says the split has drastically reduced the area of Larsen C by more than 12 percent:

This event does not directly affect anyone, and repercussions, if there are any, will not be felt for years. However, it is a spectacular and enormous geographical event which has changed the landscape... The remaining shelf will be at its smallest ever known size. This is a big change. Maps will need to be redrawn.

We will study the ice shelf for signs that it is reacting to the calving -- but we do not expect anything much to happen for perhaps years. Icebergs are routinely monitored by various agencies, and they will be keen to keep track of this one.

To give a sense of the true dimensions of the Larsen C iceberg, here's an animation based on real data, with someth… https://t.co/9YBZ6WUJLO
— Adrian Luckman (@Adrian Luckman) 1499869349.0

There is no scientific consensus whether human-induced climate change is to blame for the event. Those who dispute this theory posit that icebergs have broken away––or calved––from the shelf for millions of years, and that researchers can attribute this most recent split to natural climate variability. The researchers do agree, however, that the breakup of ice shelves in the peninsula could signal how the Antarctic ice sheet might ultimately begin to crumble.

“While it might not be caused by global warming, it’s at least a natural laboratory to study how breakups will occur at other ice shelves to improve the theoretical basis for our projections of future sea level rise,” said Thomas P. Wagner, who leads NASA’s efforts to study the polar regions.

The break has threatened the stability of the remaining part of Larsen C. Scientists believe the edge of the shelf is now much closer to a line they call the "compression arch," which helps determine structural support. Should the front retreat past that line, the shelf's northernmost section could collapse within the next few months.

“At that point in time, the glaciers will react,” said Eric Rignot, a climate scientist at the University of California, Irvine. “If the ice shelf breaks apart, it will remove a buttressing force on the glaciers that flow into it. The glaciers will feel less resistance to flow, effectively removing a cork in front of them. You have these two anchors on the side of Larsen C that play a critical role in holding the ice shelf where it is If the shelf is getting thinner, it will be more breakable, and it will lose contact with the ice rises.”