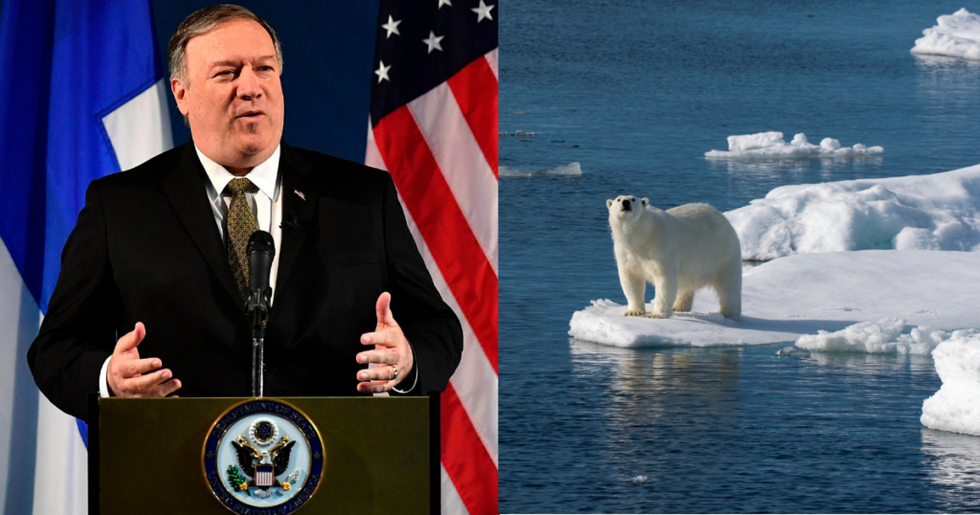 Secretary of State Mike Pompeo on Tuesday offered a blisteringly tone deaf rationalization for why melting Arctic Ice is a good thing the day after the United Nations issued another devastating report on the destruction of Earth's ecosystems.

On Monday, the UN released the conclusions of the most comprehensive study ever on the effects humans are having on Earth's habitats. The 1,500-page assessment states that nearly a million species are at risk of extinction and that that human activity is decimating wildlife at a catastrophic rate.

Despite the warnings and overwhelming evidence, including that the science of climate change has reached the "gold standard" that applies to fields like particle physics, President Donald Trump and his administration continue to deny there is any problem, and every organism on Earth is imperiled by it.

Speaking at the Arctic Council in Finland, Pompeo shocked American allies - Denmark, Finland, Iceland, Norway, Sweden, and Canada - when he suggested that the warming Arctic is good for business.

“Steady reductions in sea ice are opening new passageways and new opportunities for trade. We’re entering a new age of strategic engagement in the Arctic, complete with new threats to Arctic interests and its real estate."

Pompeo later claimed that the United States "is the world's leader in caring for the environment."

This is not true.

All they care about is money.

@washingtonpost Monetizing the apocalypse is true to the @GOP brand.
— MommyDrank (@MommyDrank) 1557235388.0

@MollyJongFast Classic dominionist. Where I destroy the world, so shall I reap a great profit. And God said I shall.
— G.deGuzman (@G.deGuzman) 1557226684.0

Timo Koivurova, the director of the University of Lapland’s Arctic Center, said that American arrogance on climate change is hampering efforts to conserve what little Arctic refuge remains. Tensions with Russia are one thing, "but mostly it’s been about the Trump presidency and their stance toward climate change which really has made things difficult,” Koivurova said.

“I feel like I got a slap in the face,” Liisa Rohweder, the CEO of WWF Finland, added.

Our government's attitude toward climate change and the environment is reprehensible.

@MollyJongFast Climate change does not exist and we are going to make money off it
— John Harden (@John Harden) 1557179116.0

The Arctic is suffering tremendously because of a rapidly warming climate. The northern polar region of our planet has lost 95 percent of its thickest sea ice because of global warming, the report warns. The Arctic is Earth's biggest natural air conditioning system, reflecting sunlight back into space, preventing the planet from overheating. As the sea ice vanishes, solar radiation gets absorbed into the dark, open sea, creating a feedback loop of intensifying warming.

Roughly three-quarters of the Earth's land mass has been transformed by humans, the report found, and 85 percent of wetlands have disappeared in a little more than a century.

This is a crisis unlike any the planet has seen in 10 million years, the report said. Short implementing "transformational changes" over the next decade or two, all of life on Earth as we know it is at risk.