Since Trump Won't, Michael Bloomberg Wants to Pay Our Entire Share of Global Climate Investment Out of His Own Pocket

He's putting his money where his mouth is. 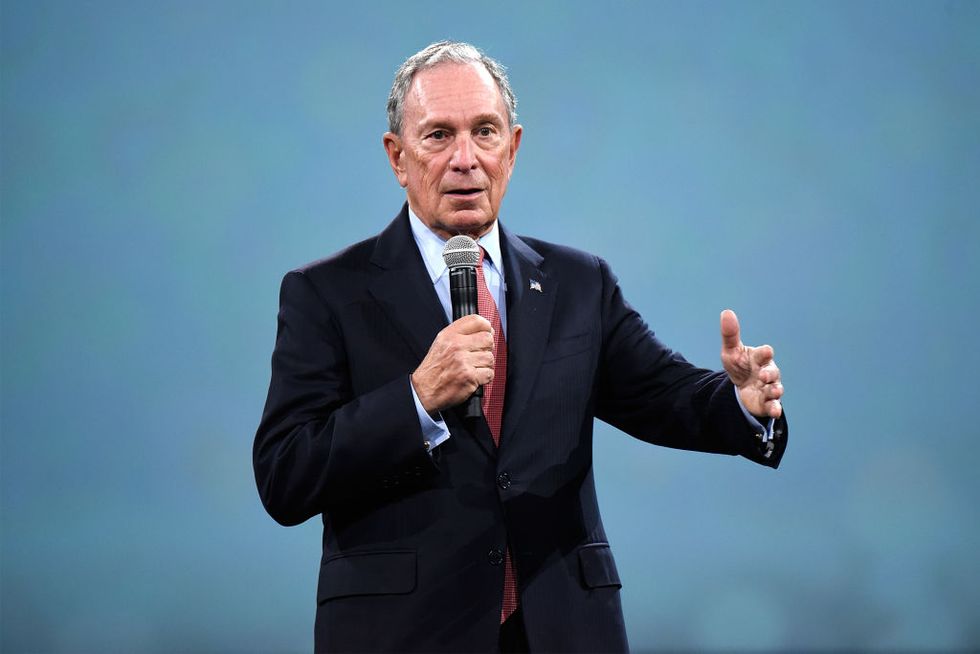 NEW YORK, NY - MAY 14: Michael Bloomberg speaks on stage during The Robin Hood Foundation's 2018 benefit at Jacob Javitz Center on May 14, 2018 in New York City. (Photo by Kevin Mazur/Getty Images for Robin Hood)

When President Trump withdrew the United States from the Paris Climate Accord, he didn’t just damage the global environment. He damaged the country's reputation. Since World War II, the United States has pledged to be a global leader, using its wealth, power and influence to make decisions that impact people around the planet. World leaders saw the U.S. as an example and its president as “leader of the free world.” That is no longer the case. Instead, some are hoping, the acts of individual Americans could signal to the rest of the world that Trump doesn’t speak for all Americans.

Billionaire Michael Bloomberg said that if the government of the second-largest polluting country won’t participate in this near-global agreement, then it’s up to individuals to step up. He put his money where his mouth is, pledging to donate $4.5 million of his own money to the operations of the UN Climate Change Secretariat in 2018, and will do so again next year if the U.S. continues to stand with climate deniers.

"America made a commitment and as an American, if the government's not going to do it we all have responsibility," Bloomberg said. "I'm able to do it. So, yes, I'm going to send them a check for the monies that America had promised to the organization as though they got it from the federal government."

In 2017, Bloomberg’s foundation donated $15 million as a non-governmental pledge to stay in the agreement, a statement to the world that U.S. citizens still care about the environment and future generations, even if the leaders in its government do not. However, without government support for other activities to limit greenhouse gas emissions, that support is limited. The Trump administration is not only removing support for science-based efforts to protect the climate and environment that help support the goals set forth in the Paris Agreement to curb emissions, it is actively reversing them.

A Pew Research Center survey of 37 countries in 2017 found that worldwide confidence in the U.S. has plummeted. Even before Trump pulled the U.S. out of the Paris Accord, Trump was seen by respondents as “arrogant, intolerant, and even dangerous.” Trump’s global unpopularity impacts how the United States is viewed. Only 22 percent of countries had a positive image of the U.S. under Trump, compared to Obama’s 64 percent  — only Russia and Israel gave him higher marks.

"Although he has only been in office a few months, Donald Trump's presidency has had a major impact on how the world sees the United States. Trump and many of his key policies are broadly unpopular around the globe, and ratings for the U.S. have declined steeply in many nations," said the researchers.

Does it matter? Well, some argue that the world’s plummeting regard emboldens our enemies. Iran recently debuted a new “Death to America” emoji, which may be just a rude bit of Internet culture, but it may also reflect a growing sentiment against not just Trump, but the people who voted for him.

As for our friends, they are losing patience with us, too. Laurent Fabius, France’s former prime minister, called the decision “dangerous nonsense” that sets a “very bad example.” French President Macron predicted that the U.S. would come to its senses and return to the agreement. “I believe in building a better future for our children, which requires offering them a planet that is still habitable in 25 years,” he said.

With unchecked greenhouse gas emissions, plunging biodiversity and increasing ocean pollution, “we are killing our planet,” Macron said. “Let us face it: There is no Planet B.”

Under the Trump administration, the U.S. is rolling back fuel efficiency standards on vehicles, reversing an Obama program that would've reduced greenhouse gas emissions by 6 billion metric tons—more than the total CO2 the U.S. emitted in 2016.

“Pruitt’s rollback of the EPA clean car standards is a U-turn in the fight against climate change. We don’t know exactly how far the agency will back-track until they publish new standards, but we can be sure that it will make achieving a low-carbon transportation system more difficult and likely more expensive,” said Luke Tonachel, the clean vehicles director for the Natural Resources Defense Council.

The Trump administration has also eliminated its climate monitoring program and removed climate change from FEMA’s strategic plan, even though extreme weather events have been impacting the country at an escalating rate in recent years, pushing FEMA beyond its operating budget. Trump’s EPA has proposed cutting voluntary emissions-reducing programs, NASA’s climate programs, and support for research on clean energy and programs to support its expansion — meanwhile, also increasing its support for coal and other fossil fuels. The Trump administration has systematically attacked nearly every environmental protection and science-based initiative set forth by his predecessors, with every week bringing new decisions that will impact life in the U.S. and on the planet.

No wonder the rest of the world is unhappy with us.