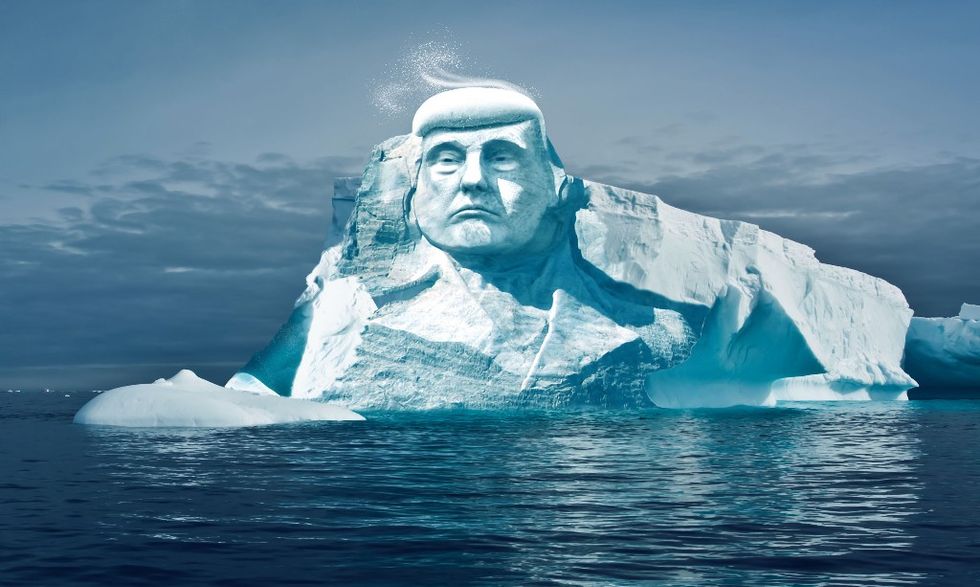 "Will the carving of Donald Trump’s face on an arctic iceberg melt or last for a thousand years?" So begins the press release from the group "Project Trumpmore" as well as their project trailer video.

"Project Trumpmore is aiming to demonstrate climate change in a monumental way," according to that same press release. "A Finnish NGO (non-governmental organization) wants to commission a 115-foot tall ice sculpture of Donald Trump’s face in the arctic region to demonstrate that climate change is happening."

Like the former US presidents on Mount Rushmore, Donald Trump will have his face carved onto an arctic glacier, in order for it to melt."

"Global warming is one of the most important issues and topics of today," says Nicolas Prieto, the chairman of the association Melting Ice, that conceived Project Trumpmore after a speech given in Ohio by President Donald Trump where he talked about being added to Mount Rushmore.

"There are still people who ponder whether it’s a real issue," continues Prieto. "We want to build the monument for all of us, so we can see how long the sculpture lasts before melting. Often people only believe something when they see it with their own eyes."

As described on their website, Project Trumpmore is a science/art project by Melting Ice Association. The intention is to provide a concrete, visible, verifiable example showing whether global warming is true or false.

The group originally planned to use an iceberg as their carving medium, but since icebergs can melt by floating out of the Arctic, plans changed to use a glacier instead.

The objective is to sculpt president Donald Trump’s bust into the Arctic glacier and install a camera to the site of the sculpture to live stream its fate. If you want to be involved in sending a message about the hottest topic in the world, come along!"

The project is the brainchild of three young men working in the creative field. Sick of talking about climate change and global warming, they wanted to take action instead.

"Instead of filling the world with fake news and alternative facts, this project aims to actually show climate change taking place," they state.

“Our starting point was to create something concrete, something people can see and something that makes climate change visual," Nicholas Prieto explains. "In general, we believe that a DIY-attitude appeals to people, and it’s certainly the same thing which got us started."

This project is a huge challenge and we can’t do this without help. We are now asking everybody to join this movement. It can be made by talking, liking, sharing, funding etc. All possible help is more than welcome.”

"Project Trumpmore’s goal is to generate conversation and hopefully catch the eye of anyone who is willing to fund our project."

But why President Trump? As heard in the trailer video, through both the impersonated voice reading quotes from the president and actual audio of Trump speaking, the United States president is a very public face of climate science denial.

He also frequently mocks the idea of global warming and climate change on Twitter.

We should be focusing on beautiful, clean air & not on wasteful & very expensive GLOBAL WARMING bullshit! China & others are hurting our air
— Donald J. Trump (@Donald J. Trump) 1387102069.0

This December, the president again displayed a lack of understanding regarding climate change by making the oft repeated error of asking, if there's global warming, why is it still cold in the winter?

In 2017, Trump withdrew the United States from the 2015 Paris Agreement, a deal signed by nearly 200 countries focused on reducing carbon emissions, slowing rising global temperatures and helping countries deal with the effects of climate change.

The temperature of the planet has risen about 1.1 degrees Celsius (2 degrees Fahrenheit) since the Industrial Revolution. An overwhelming majority of scientists say burning fossil fuels, such as coal, oil and gas, caused Earth's climate due to emissions released into our atmosphere.

Melting Ice hopes to raise $500,000 to complete Project Trumpmore. If the money is raised, carving will begin.

"If we reach the construction phase, the plan is to build Trumpmore to match the size of the presidents on Mount Rushmore. The execution of the project will be carried out by a world-leading team of Finnish and Mongolian ice sculptors. Estimated building will take four weeks and the process will be documented and broadcast via a live feed."