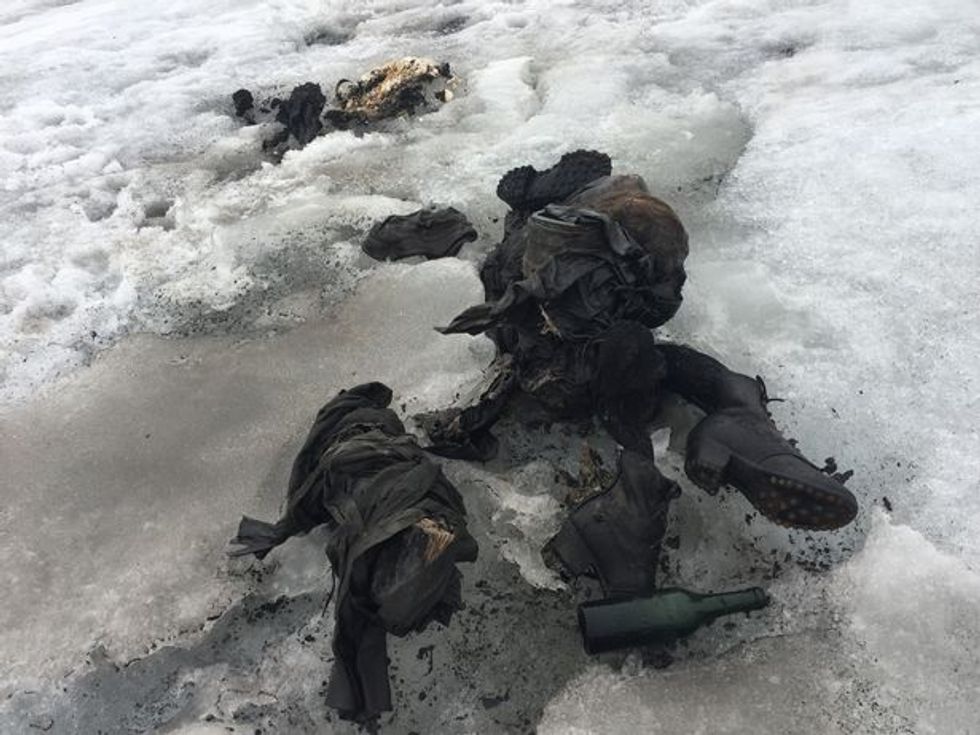 As glaciers melt around the world, secrets and mysteries that remained frozen in time have been uncovered and solved. In some cases, this involves the gruesome discovery of well-preserved human bodies revealed by the receding ice.

The fate of Marcelin and Francine Dumoulin, a Swiss couple who disappeared 75 years ago, was revealed this month when the Tsanfleuron Glacier in the Swiss Alps receded enough to reveal their long-frozen bodies. It was back in August of 1942 when the couple, a shoemaker and schoolteacher, went out to tend livestock and never came back. A worker found the bodies, along with a water bottle, clothing, a pocket watch, a book, and boots, near a ski lift at an Alps resort.

It is thought that the couple fell into a crevasse. That day was the first time Francine joined her husband for the chore. "She was always pregnant and couldn't climb in the difficult conditions of a glacier,” said Marceline Udry-Dumoulin, the couple’s youngest daughter. The couple’s seven children were farmed out to various families and grew up separated. Only two are still alive.

"We spent our whole lives searching for them, without stopping. We never thought we'd be able to give them the funeral they deserved.” A funeral for the couple was finally held on July 22.

The TsanfleuronGlacier has been losing ice at a rate of three to four feet a year. Glaciers around the world are disappearing rapidly. U.S. Geological Survey data released in 2017 indicates that the glaciers in Glacier National Park have shrunk 40 percent since 1966 and are expected to disappear in our lifetimes. NASA estimates that the Arctic will be ice-free by 2050. Bettina Schrag,cantonal head of forensic medicine, said, “Given the current shrinking of glaciers, we have to expect more and more such findings.”

Several bodies of mountain climbers and explorers have been recovered from former glaciers, including those of famous Mount Everest climbers George Mallory and Jonathan Conville. In 2016, the remains of two Japanese climbers who had been missing since 1970 were uncovered on the Matterhorn. Since 1925, 280 people have been listed as missing in the Alps or nearby regions.

Melting glaciers have also revealed prehistoric animals, plane crash sites, and Roman coins and shoe nails. This archaeological treasure hunt has its dark side, too. Scientists have discovered that viruses and bacteria that have been frozen for as long as millions of years can come back to life, and as soils thaw, ice melts and bodies return, they could bring back diseases to which modern humanity has no exposure or resistance.

In 2016, a 12-year-old boy died and at least 20 people were sickened in the Arctic Circle by the anthrax virus. The outbreak is believed to have originated when a long-frozen reindeer infected with the virus was revealed by melting Arctic ice. The newly exposed reindeer corpse released infectious anthrax into nearby water and soil, and then into the food supply. More than 2,000 reindeer grazing nearby were infected.

"Permafrost is a very good preserver of microbes and viruses, because it is cold, there is no oxygen, and it is dark," says evolutionary biologist Jean-Michel Claverie at Aix-Marseille University in France. "Pathogenic viruses that can infect humans or animals might be preserved in old permafrost layers, including some that have caused global epidemics in the past."

Scientists have discovered RNA from the deadly Spanish flu epidemic in corpses buried in mass graves in Alaska's tundra. The melting Siberia tundra has revealed bodies from as far back as the Neanderthal period. Smallpox and the bubonic plague are also likely buried in Siberia.

"As a consequence of permafrost melting, the vectors of deadly infections of the 18th and 19th centuries may come back, especially near the cemeteries where the victims of these infections were buried," said Boris Revich and Marina Podolnaya scientists who research climate change and infectious diseases.

"The possibility that we could catch a virus from a long-extinct Neanderthal suggests that the idea that a virus could be 'eradicated' from the planet is wrong, and gives us a false sense of security," says Claverie. "This is why stocks of vaccine should be kept, just in case."