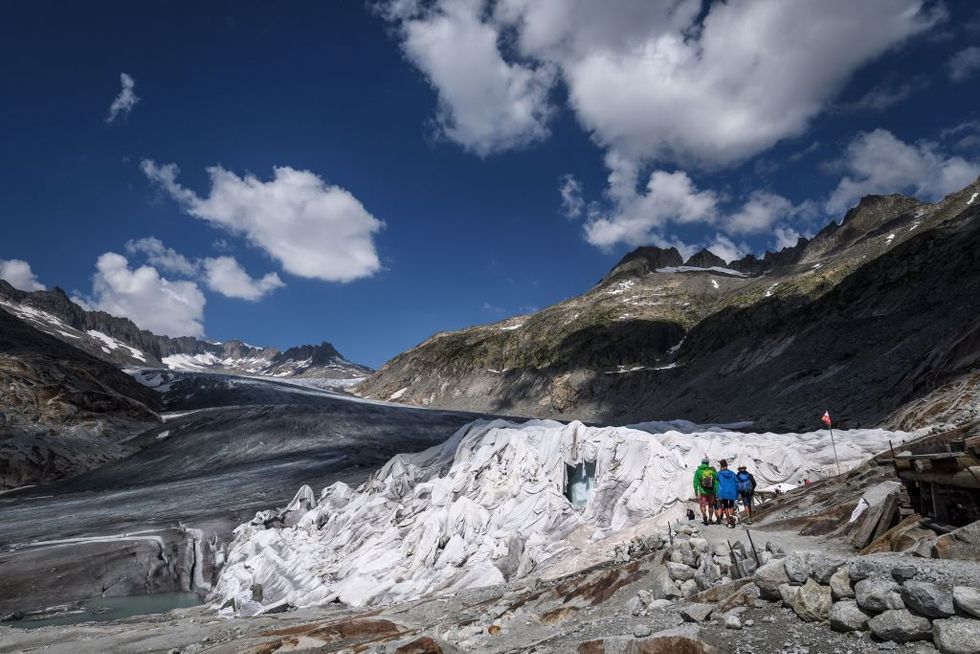 Hikers walk next to a part of the Rhone Glacier, covered with insulating foam to prevent it from melting, near Gletsch on August 3, 2018, as a heatwave sweeps across northern Europe. (Photo by FABRICE COFFRINI/AFP/Getty Images)

As the planet heats up, glaciers are melting at a catastrophic rate. Colombia's glaciers have lost a third of their mass since the mid-1990s and are expected to be gone in 30 years. Glacier National Park in Montana was named for the 150 or so glaciers present when it was established in 1910, but today it has fewer than 26. Researchers believe that most central and eastern Himalayan glaciers will be gone by 2035. The largest glacier in Greenland has lost more ice in the last 15 years than it did in the previous 100, and scientists predict that when all of Greenland’s ice is gone, sea levels around the world will rise 20 feet.

“The changes we are witnessing are amazing,” says Eric Rignot, a professor at The University of California, Irvine and a senior scientist on a NASA team that’s traveled to Greenland to try to better understand exactly how quickly its glaciers are melting. “None of us expected to see such changes in Greenland.”

The loss of ice is occurring everywhere, from Antarctica to the Arctic. In places like Colorado, New Zealand, the Himalayas and Alaska, tourists are rushing to see the glaciers before they are gone. Glacier tourism, like all tourism, with its carbon-intensive air travel and additional resource consumption, is itself fueling climate change—an estimated 10 percent of all carbon emissions are attributed to tourism.

“The rate of change now in the mountain glaciers is already faster than anything we see in the geological record,” says Joerg M. Schaefer, a climate geochemist at Columbia University's Lamont-Doherty Earth Observatory. “And it's accelerating.”

Sometimes the glaciers fight back. Melting glaciers can release sudden bursts of water that flood communities below. Tourists have been killed by rock avalanches or blocks of ice falling off the dissolving ice sheets. Others have fallen into the glacier and died when the snow covering a glacier actually conceals a crevasse, a great crack in the ice that can go down for miles, making rescue or recovery impossible.

What the glaciers have taken, the glaciers are now giving back. Melting ice around the planet is revealing bodies, aircraft, Ice Age creatures, lost treasures, and other secrets long hidden under the ice and snow.

In Switzerland last year, the bodies of Marcelin and Francine Dumoulin were discovered on a melting glacier after 75 years. The couple had ventured from their farmhouse in 1942 to check on some cows. Days later, when they still hadn’t returned, it was assumed they had fallen into a crevasse. Their seven children were divided up among various friends and relatives, and only one was still alive when their bodies were found.

Another melting Swiss glacier revealed the wreckage debris of an American World War II plane that crash-landed in the Bernese Alps in 1946. The C-53 Skytrooper Dakota was traveling from Austria to Italy when it collided with the Gauli Glacier at an altitude of 10,990 feet. Its crew survived but their aircraft was entombed on the glacier until now. A group of hikers found its propeller in 2014, and a heatwave in the fall of 2018 uncovered the rest of the plane, scattered across the ice.

One by one, the bodies of 102 people who died in an Indian Air Force plane crash fifty years ago are being recovered as the glaciers of the Lahaul valley of Himachal Pradesh give them up. The plane’s wreckage and one body were found in 2003. In 2007, three more bodies were found, and another one turned up in July 2018.

“The glaciers are retreating, so it's logical that we are finding more and more bodies and body parts,” said a police spokesman from Valais. “In the coming years, we expect that many more cases of missing persons will be resolved.”