Peat bogs contain untold treasures from the past. But harvesting and warmer temps could turn these fuel sources into a huge climate danger. 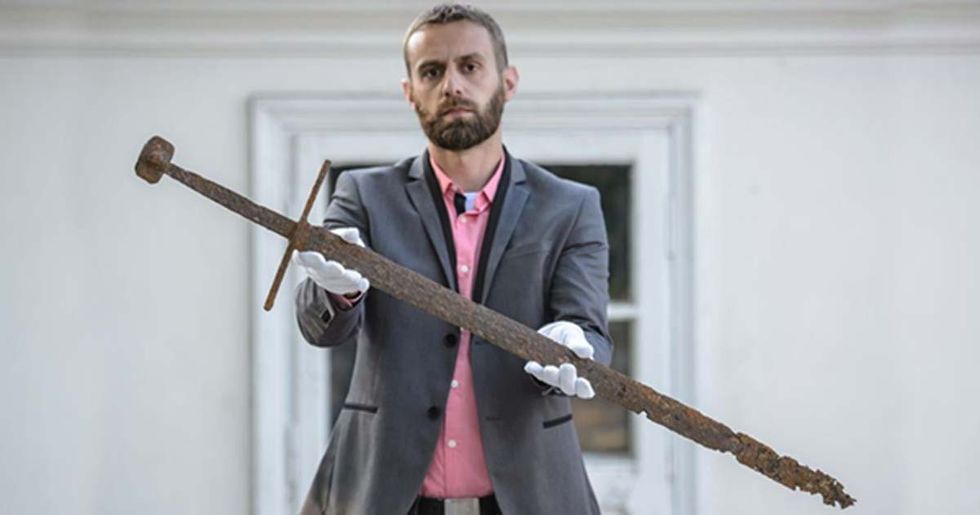 An amazing array of artifacts from hundreds, even thousands of years ago have been found in peat bogs. These spongy natural areas have unique qualities that successfully preserve organic matter, including an acidic, low-oxygen environment and layers of sphagnum moss, which deters the natural decomposition process. Numerous stunningly well-preserved human bodies, known as “bog bodies,” have been found in locations across Northern Europe, and even in warm-weather places like Tanzania and Florida. In addition to bodies, artifacts have been found in bogs, including butter, an ancient book of psalms, and now a medieval sword.

While draining a bog in Poland, a construction worker named Wojciech Kot recently discovered a four-foot-long sword that archeologists believe dates back to the late 13th or mid 14th century. The bog conditions preserved the sword, which weighs about three pounds, almost entirely. It’s original hilt, which would have been made of leather, wood, or bone, is gone, but the sword bears a distinctive blacksmith mark featuring a cross inside a heraldic shield. The weapon has been donated to the Stanisław Staszic Museum. The exact location of the bog is not being disclosed to prevent looting.

Bartłomiej Bartecki, director of the museum, said the two-handed weapon is a "unique find in the region" but it would have been a standard weapon for knights 600 years ago. The bog is located in an area that became part of the Kingdom of Poland starting in 1366. A castle was built in Hrubieszów by a Polish governor and would have been a source of employment for knights.

Peat bogs hold a wealth of information about ancient humans, as well as information about the climate, vegetation, and events of the past. They also provide a critical habitat for rare and endangered plant and animal species. But peat bogs around the world are in danger. Peat is used in gardening, on golf courses, and it’s burned as fuel. These biodiverse, unique ecosystems take thousands of years to develop, but when it’s harvested, or “mined,” invasive species can quickly move into the vacated space, making it difficult for the slow-growing sphagnum moss to regenerate.

Peat also serves as a valuable carbon sink that helps remove carbon dioxide from the atmosphere. In areas where peat bogs are forested, however, the peat can become a huge carbon emitter when the forest canopy is logged, causing the peat to dry out and catch fire. The fires then have access to a large source of fuel and are difficult to extinguish. In recent years, Indonesia has experienced massive, prolonged fires, due to its peat bogs being exposed by extensive slash-and-burn logging. These fires smolder underground for months and emit dangerous amounts of smoke, contributing to global warming.

Indonesia has over 77,000 square miles of peatland which measures 18 feet deep and, in some places, up to 66 feet deep on average. This provides a prolonged source of fuel for fires. “They’re very difficult to put out because they’re deep,” says Robert Gray, an independent fire ecologist based in Chilliwack, British Columbia.

In 2016, Indonesian peat fires released more carbon into the atmosphere than the European Union.

“They take thousands of years to develop,” said Merritt Turetsky, a peat researcher at the University of Guelph in Ontario, who studies North American peat fires. “And in five minutes, a wildfire can blow through that area and release five to six hundred years of peat accumulation and change it forever.”