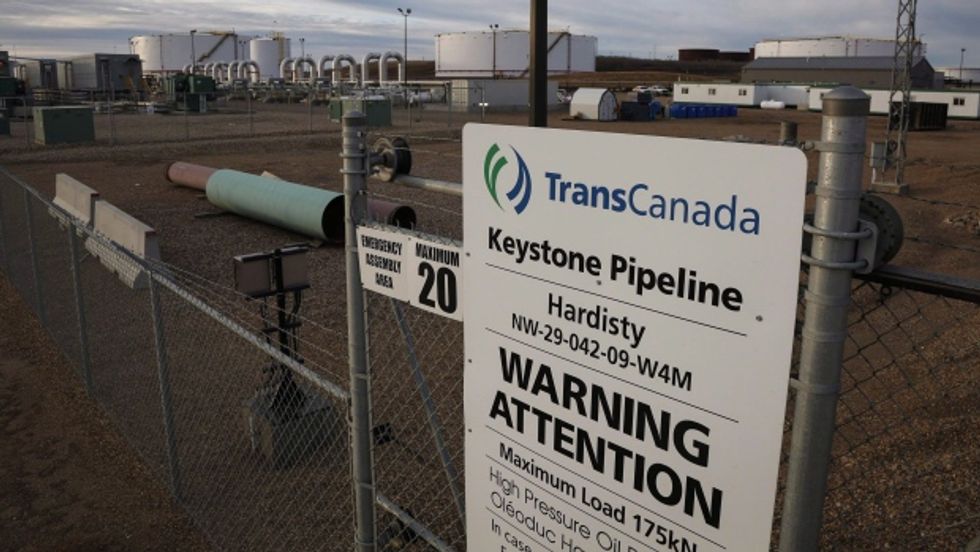 The company said crews shut down the Keystone pipeline system Thursday morning between Hardisty, Alberta, Canada and Cushing, Oklahoma, and a line to Patoka, Illinois. They expect the line to remain shut down while they respond to the spill.

Brian Walsh, an environmental scientist manager at the South Dakota Department of Environment and Natural Resources, said the state sent a staff member to the site of the leak. The oil spilled onto agricultural land in a rural area near the border with North Dakota about 250 miles west of Minneapolis.

"Ultimately, the cleanup responsibility lies with TransCanada, and they'll have to clean it up in compliance with our state regulations," Walsh said.

The oil leaked from an underground section of the Keystone pipeline near Amherst, South Dakota, about 15 miles west of the Sisseton Wahpeton Oyate of the Lake Traverse Reservation.

Sisseton Wahpeton Oyate tribal chairman David Flute said his community fears the leak, the largest but not the first by the Keystone pipeline in South Dakota to date, could pollute the area's aquifer and waterways.

We are keeping a watchful eye and an open ear. The concern is at a high level, but there is really nothing we can do."

TransCanada officials claim the pipeline leak did not contaminate any drinking water systems or surface bodies of water.

The spill comes at the worst possible time for TransCanada. A vote by the Nebraska Public Service Commission takes place November 20 on whether to accept TransCanada's Keystone XL proposal.

They seek to lay new pipeline through Montana, South Dakota and Nebraska where it would meet existing infrastructure in Steele City, Kansas.

It poses a risk to the Indigenous rights of tribal nations all along the route and it's a complete disregard for free prior and informed consent as guaranteed on the UN Declaration on the Rights of Indigenous Peoples."

"It puts at risk the drinking water of over 65,000 Indigenous peoples along the route and puts at risk the livelihood for so many people that depend on tourism, on the land itself for farming and livestock. It's a risk we can't take,"said Goldtooth, who is directly involved in campaigns against the pipeline's construction.

Goldtooth was also involved in the Standing Rock Sioux tribe's battle over the Dakota Access Pipeline which unfolded roughly 200 miles northwest of this oil spill.