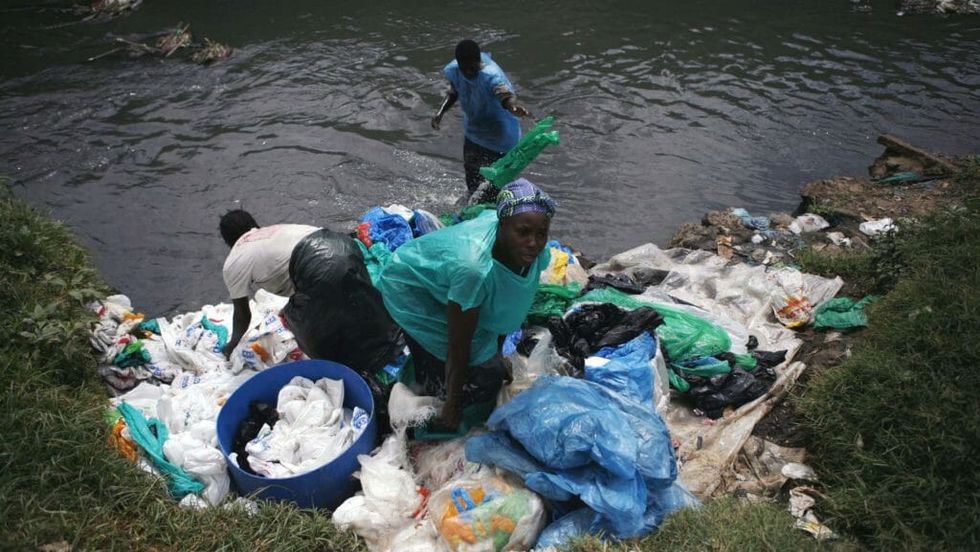 Kenya has enacted the world’s strictest ban on plastic carrier bags. How strict? Violators face fines of up to $38,000 or prison sentences of up to four years for selling, manufacturing or even carrying the offending bag.

The African country is struggling with a massive plastic trash and pollution problem, which has badly damaged the environment, clogging waterways, blocking drainage systems, killing wildlife, and contaminating the meat industry. Over the past 10 years, the government has repeatedly tried to rein in the ubiquitous bags — Kenyans use an estimated 24 million bags a month — but the plastic industry has opposed any attempts to limit the bags, and previous bans have been mired in appeals. Now, after a six-month preparation period, Kenya is serious about going bag-free.

"It is a toxin that we must get rid of," said Judi Wakhungu, the country's Cabinet secretary for the environment, told reporters. "It's affecting our water. It's affecting our livestock and, even worse, we are ingesting this as human beings."

In the short term, as the society adjusts to the new rules, consumers will be issued a warning for carrying the bags. Biodegradable paper bags will be available, and people are encouraged to bring their own reusable bags as well. Supermarket chains like France’s Carrefour and Nakumatt are selling reusable bags as alternatives.

Several other African countries have outlawed plastic carrier bags, including Rwanda, Mauritania and Eritrea. More than 40 countries around the world, including China, France and Italy, have limited or taxed single-use plastic bags, and others are contemplating limits.

Massive tangles of plastic waste are common sights throughout Kenyan cities and the countryside, where grazing livestock ingest large quantities of plastic — so much that concerns about plastic contamination of meat spurred action on the bag ban. The United Nations' Environment Programme says huge amounts of polythene bags — about 20 bags per cow — are pulled out of carcasses in Nairobi's stockyards. It can take centuries for a bag to fully break down.

Plastic has also become a huge problem in the oceans, forming massive floating islands of garbage, choking and killing wildlife, and disrupting the hormones of fish and other marine animals. As it breaks down, plastic waste is infiltrating the human food chain.

“We’re all infected with plastic,” says Seattle-based oceanographer Curtis Ebbesmeyer. “Molecules from some kid’s plastic bottle, dropped into the ocean in Asia, are winding up in the food Americans eat.”

A 2016 study by Plymouth University found that tiny particles of plastic — microplastics — are contaminating seafood and becoming part of the human food chain, with about a third of all seafood containing plastics. People who eat seafood can expect to ingest 10,000 plastic particles a year. An estimated five trillion pieces of plastic, or 269 tons, are floating in the ocean.

“If we continue like this, by 2050, we will have more plastic in the ocean than fish,” said Habib El-Habr, an expert on marine litter working with the UN environment programme in Kenya.

Opponents of the ban argued that jobs would be lost. The Kenyan Association of Manufacturers, which challenged the ban in court, said nearly 3 percent of all Kenyans are employed by plastic manufacturers. In extremely poor areas with no running water or sanitation, the plastic bags are also used as “flying toilets” — people with no other option to defecate in them.

"It may look very fashionable in international circles," said. "But in reality, in a place like Kibera, we still need those plastics,” said Kenneth Okoth, a member of Parliament who represents Kibera, where residents live on less than $2 a day."It's not the plastic's fault," he said. "It's a lack of a system to collect the plastic and reuse it and make a value chain out of it beyond that first usage."

However, bag bans have ultimately created new opportunities. In Uganda, entrepreneurial women are using traditional handcrafting techniques to weave durable, reusable shopping bags. In Cairo, used plastic bags are the material of choice in a new weaving industry that is turning trash into reusable bags. So Afr-Eco Community Upliftment Project for Rural Women, a South Africa-based NGO, has employed women throughout the developing world in a project that turns plastic bags into handbags, wallets, and reusable shopping bags that are sold in Italy by Benetton. These creative initiatives prove that not only does consumerism carry on without plastic bags, but in many ways we are better off without them.