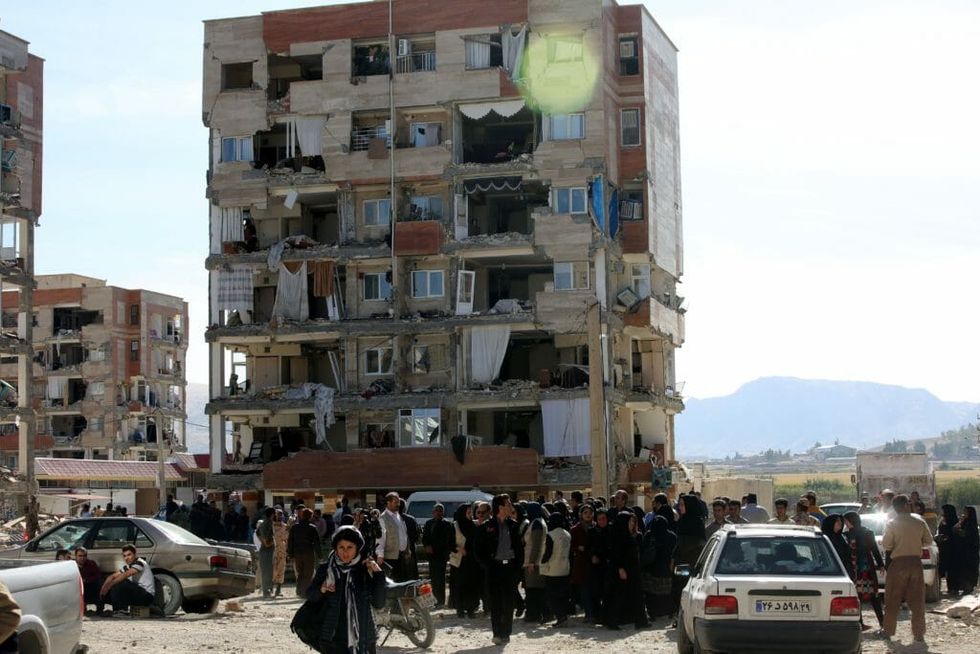 KERMANSHAH, IRAN - NOVEMBER 13: Earthquake survivors mourn for the victims in Sarpol-e Zahab town of Kermanshah, Iran on November 13, 2017 following a 7.3 magnitude earthquake that hit the Iraq and Iran. An earthquake measuring 7.3 on the Richter scale rocked northern Iraq and Iran, the U.S. Geological Survey said on Sunday evening. Turkish paramedic teams and rescue teams dispatched to the disaster area under the coordination of Turkish aid agencies; AFAD (Turkey's Disaster Management Agency) and Kizilay (Turkish Red Crescent). At least 211 died and 2,504 others were injured in Iran's bordering regions, especially in Kermanshah province in west. (Photo by Fatemeh Bahrami/Anadolu Agency/Getty Images)

News reports indicate more than 300 people were killed and more than 4,000 were injured after a 7.3 magnitude earthquake struck the border region between Iran and Iraq late yesterday. Iran state news agency Irna reported a much higher estimate, however, quoting an emergency official as saying6,603 people were injured in the country alone. According to the U.S. Geological Survey, the quake, which hit 19 miles from Halabja, Iraq, reached a depth of over 14 miles. Aftershocks were felt as far away as Pakistan, Lebanon, Kuwait, and Turkey.

Speaking to Reuters, Baghdad resident Majida Ameer described her experience: "I was sitting with my kids having dinner and suddenly the building was just dancing in the air. I thought at first that it was a huge bomb. But then I heard everyone around me screaming: 'Earthquake!'"

The city of Sarpol-e Zahab, in the western Iranian province of Kermanshah, is believed to be the hardest hit. Authorities reported that at least 236 people had died and that the city's main hospital had suffered severe damage.

Farhad Tarji, a member of Parliament for Sarpol-e Zahab, told state news that his family had suffered major losses as a result of the quake. “I’ve lost 15 people,” he said.

On the Iraqi side, BBC reporter Rami Ruhayem, speaking from the regional capital Irbil, described shaking that lasted for more than a minute. For a few seconds at first it was barely detectable, I wasn't sure whether it was a minor tremor or just my imagination," he said. "But soon enough it was unmistakable as the building started swaying from side to side."

Iraqi Prime Minister Haider Al-Abadi tweeted that he "instructed civil defense teams and health and aid agencies to do all that they can to provide assistance" to those affected by the disaster.

Tensions spiked as angry residents decried the lack of food, water, and other resources amid freezing temperatures.

The Iranian government newspaper posted a video of one man's account to social media.

“There has been no help yet, neither food nor water, no clothing, no tents, there is nothing,” said a resident of Sarpol-e Zahab, standing in the rubble of destroyed buildings. “There are no facilities yet. We’ve slept outside since last night. This is the condition of our homes. Our electricity, water, gas, phone lines are out, everything is completely out, the whole city has been destroyed, it is wrecked.”

Hojjat Gharibian, one of the hundreds of homeless survivors in the city of Qasr-e Shirin, told Reuters, “My two children were sleeping when the house started to collapse because of the quake. I took them and ran to the street. We spent hours in the street until aid workers moved us into a school building."

An image posted on Twitter showed soldiers searching through the rubble at night without flashlights or torches, using only the light from their cellphones to guide them.

Iran, which sits on dozens of fault lines, is prone to earthquakes. This is the deadliest earthquake since a double earthquake in the country's northern region killed 300 people in 2012. In 2003, more than 20,000 people were killed––with some estimates as high as 31,000––after an earthquake leveled the city of Bam.