Populations of pollinators and other winged insects are plummeting around the world. But a clean windshield comes at a steep cost. 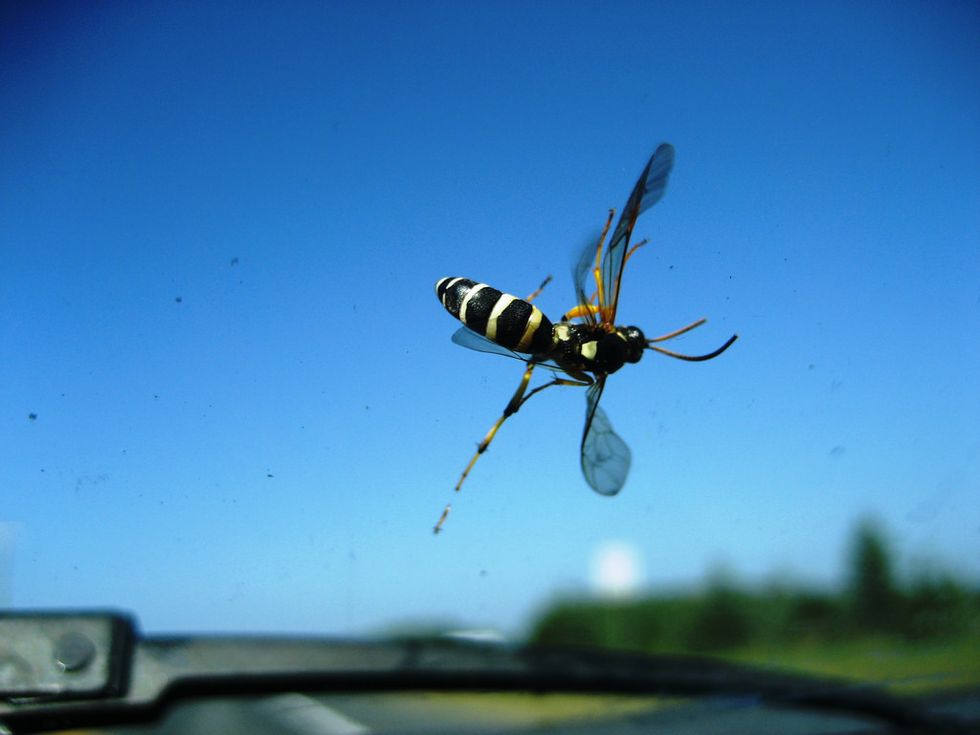 Remember all those dead bugs on your windshield? On summer nights, so many insects were in the air that a speeding car might smash dozens of the delicate winged creatures as a matter of course. That doesn’t happen anymore.

“Just today we had a member of the public phone up and say, unprompted, that ‘the front of my car is now devoid of insects, and there are virtually no moths in the headlights,’” said Matt Shadlow, Chief Executive of British insect conservation charity Buglife. “This is part of the wholesale loss of small animals in recent decades. The public know about bees and butterflies, but these are just the tips of the iceberg. Moths, hoverflies, wasps, beetles and many other groups are now sparse where once they were abundant.”

Not only are our butterflies and honeybees disappearing, but a wide host of other insects, including mayflies, moths, hoverflies and tiny beetles, are no longer in the skies in any great numbers. Around the world, scientists are noting the “windshield phenomenon” (or as they call it in the UK, the windscreen phenomenon). "I'm a very data-driven person," says Scott Black, executive director of the Xerces Society for Invertebrate Conservation in Portland, Oregon. "But it is a visceral reaction when you realize you don't see that mess anymore."

Now the data is coming in, too. The Krefeld Entomological Society, which tracks insect abundance at more than 100 nature reserves in western Europe, has observed populations of winged insects fluctuating since the 1980s. In 2013, however, they noticed something alarming. They found the total mass of insects trapped at one of their earliest trapping sites had fallen by nearly 80% since 1989. The following year, the numbers didn’t rebound. The group, which has preserved thousands of samples over the past three decades, found the same declines across more than a dozen other sites. Those losses will travel up the food chain.

"If you're an insect-eating bird living in that area, four-fifths of your food is gone in the last quarter-century, which is staggering," says Dave Goulson, an ecologist at the University of Sussex in the United Kingdom, who is working with the Krefeld group to analyze and publish some of the data.

The group’s trap sites have been called “weather stations for biodiversity,” because they monitor the types of insects that aren’t showy or exciting, yet are important food sources for other species and important indicators of overall ecosystem health. Hover flies, an important pollinator, saw a particularly dramatic decline. In 1989, the group's traps in one reserve collected 17,291 hover flies from 143 species. In 2014, at the same locations, they found only 2,737 individuals from 104 species. The reasons why remain unclear.

"We've lost huge amounts of habitat, which has certainly contributed to all these declines," Goulson says. "If we turn all the seminatural habitats to wheat and cornfields, then there will be virtually no life in those fields. Farmland has very little to offer for any wild creature."

The fate of the hover flies points to another possible factor. Neonicotinoid pesticides were introduced in the 1980s and are now the world's most popular insecticides. The water-soluble chemicals also run off into nearby areas that haven’t been treated. Goulson and his colleagues found that nectar and pollen from wildflowers next to treated fields can have higher concentrations of neonicotinoids than the crop plants.

Neonicotinoids affect insects' abilities to navigate and communicate, and a team from the University of Regensburg in Germany reported in Scientific Reports that exposing the wasp Nasonia vitripennis to just 1 nanogram of one common neonicotinoid cut mating rates by more than half and decreased females' ability to find hosts. "It's as if the [exposed] insect is dead" from a population point of view because it can't produce offspring, says Lars Krogmann, an entomologist at the Stuttgart Natural History Museum in Germany.

Since 2006, beekeepers in Britain have lost about a third of their managed bee colonies each year, largely due to conversion of flower-rich grassland to development — a 97 percent decline from the 1930s — and the use of insecticides . In the US, the population of western monarch butterflies declined 97 percent from its 1996 numbers. “We were not expecting the decline to be as sharp as it was when we did the analysis. We knew they were in decline, but we did not know it was that steep," said Cheryl Schultz, a butterfly specialist at Washington State University Vancouver and lead author of a new population study published in the journal Biological Conservation. The decline is enough to warrant at least a threatened status under the Endangered Species Act.

It can’t be proven that pesticides are to blame for the insect population losses. "We simply don't know what the drivers are" in the Krefeld data, Goulson says. "It's not an experiment. It's an observation of this massive decline. The data themselves are strong. Understanding it and knowing what to do about it is difficult."

Another study, published in the journal Plos One, calculates that the overall number of insects has plummeted by 75 percent in the last 27 years, spelling a coming ecological disaster that will impact all life on Earth.

As humans are saturating the environment with insecticides specifically to kill insects, the results of this study — and our cleaner windshields — might be viewed as a positive thing, except that the types of insects that are disappearing are largely beneficial. Pollinators are critical to all life on Earth, and flying insects are important food supplies for birds, fish and other species.

“If total flying insect biomass is genuinely declining at this rate – about 6% per year – it is extremely concerning,” said Lynn Dicks at the University of East Anglia, UK. “Flying insects have really important ecological functions, for which their numbers matter a lot. They pollinate flowers: flies, moths and butterflies are as important as bees for many flowering plants, including some crops. They provide food for many animals – birds, bats, some mammals, fish, reptiles and amphibians. Flies, beetles and wasps are also predators and decomposers, controlling pests and cleaning up the place generally.”

Some less beneficial insects, such as pests like aphids and mosquitos, will not only remain but grow stronger as their predators disappear. With declining numbers of predator bugs, these pests are becoming more abundant.

Sorg says. "We won't exterminate all insects. That's nonsense. Vertebrates would die out first. But we can cause massive damage to biodiversity—damage that harms us."