Fox News Media Critic Just Slammed His Own Network Live On Air, and Twitter Is Cheering 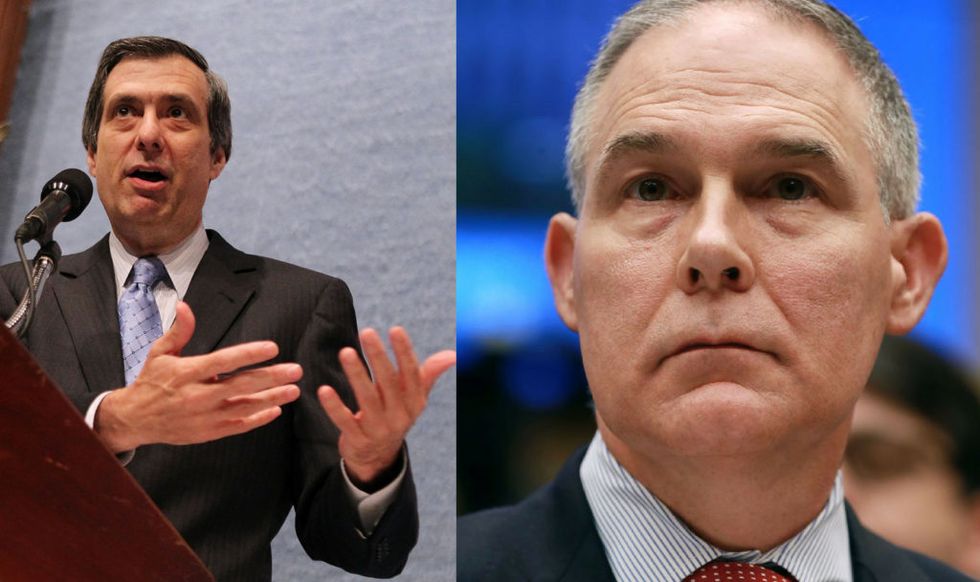 Pruitt was embroiled in a number of scandals and ethically questionable acts before President Donald Trump announced he'd accepted his resignation. The many scandals included renting a room for $50 a night from a lobbyist and using security detail for personal errands, among numerous other controversies.

That didn't stop a panel of Fox News commentators from attempting to divert the blame for Pruitt's resignation to journalists and other factions of the media looking to preserve Obama-era environmental regulations with a vengeance.

The Washington Examiner's Susan Ferrechio said on the show:

[Pruitt] was trying to take apart the Obama-era EPA regulations and he accomplished a lot of that, and I think that fueled the investigatory desires of journalists to try to take him down, and outside groups and people within the EPA to try to take him out for that very reason...He made himself a very easy target, clearly. But he would not have been the same level of target if he had a different job within the administration.

Thankfully, Howard Kurtz was not going to let them off so easily.

Kurtz was quick to take the panelists to task by criticizing his own network's lack of coverage on the resignation.

Pruitt's resignation was barely covered on Fox in primetime or early the next morning ... and I think that was a mistake.

This is far from the first time that Kurtz has called out Pruitt for his ethical recklessness. He addressed Pruitt's and others in the Trump administration's indiscretions in an article for Fox News, as well as mentioning Pruitt on Republican Fox Host Laura Ingraham's show. Ingraham herself, normally known for being virulently conservative, even called for Pruitt's firing on Twitter.

Kurtz has taken to Twitter to address the Pruitt scandals as well:

Amazing thing about Scott Pruitt's resignation is that with so many allegations against him, he hung on so long--be… https://t.co/dy0kB7jXd4
— HowardKurtz (@HowardKurtz) 1530821161.0

Surprising that the Pruitt ouster didn't leak--many had become numb to the allegations against the EPA chief & Trum… https://t.co/D0SZVytVL6
— HowardKurtz (@HowardKurtz) 1530821243.0

Kurtz is perhaps right in this regard. Pruitt's numerous scandals and ethical inquiries are but a few instances of a pattern that has come to characterize the Trump administration. So far, it seems like the swamp is nowhere near to draining. If anything, it's clogged.

The reactions across social media appear to reflect this:

@HowardKurtz And because scandals matter so little in the age of Trump. #pruitt #zinke #ross
— Kompromat (@Kompromat) 1530821907.0

In the three paragraph note, 268 words total, Pruitt mentions serving Trump 9 times in phrases like “an honor to serve you”, “difficult for me to cease serving you”, “a blessing to be serving you in any capacity” and “My desire in service to you.”

Of the 9 total times serving is mentioned in the letter, only once does Pruitt include also serving the American people. No mention of upholding or defending the United States Constitution is included anywhere.

But for anyone who has taken up public service knows, be it in the military or civil service, an oath of allegiance is undertaken. Pruitt as well as every Trump administration cabinet member, advisor and aide also took the same oath. It is required by federal law.

Under U.S. Code-Title 5-Part III-Subpart B-Chapter 33-Subchapter II-§ 3331, “An individual, except the President, elected or appointed to an office of honor or profit in the civil service or uniformed services, shall take the following oath:

I, ___, do solemnly swear (or affirm) that I will support and defend the Constitution of the United States against all enemies, foreign and domestic; that I will bear true faith and allegiance to the same; that I take this obligation freely, without any mental reservation or purpose of evasion; and that I will well and faithfully discharge the duties of the office on which I am about to enter. So help me God (reference to God now optional).”