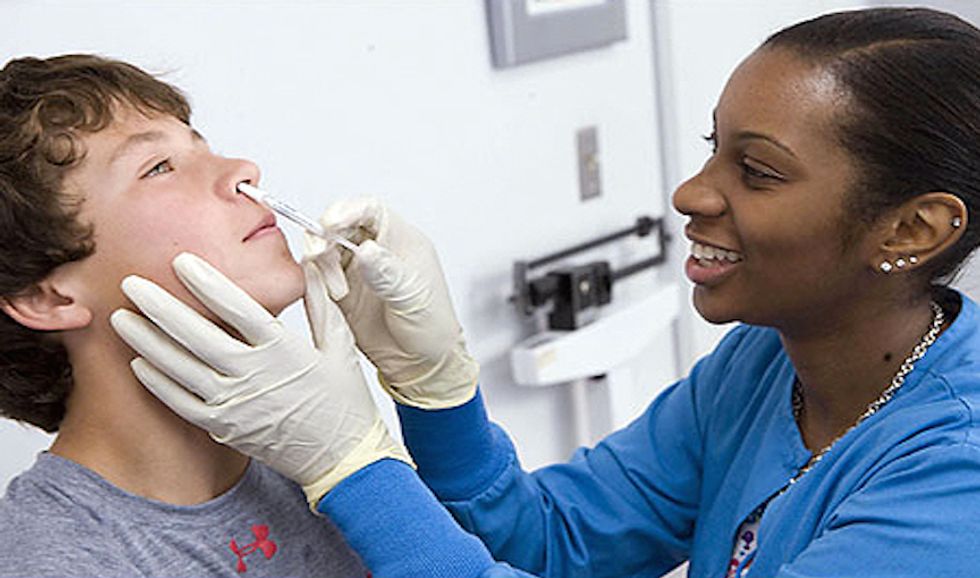 When FluMist hit the market in 2003, parents rejoiced. They could protect their children from the potentially deadly influenza virus without subjecting them to the needle. But now it turns out the popular alternative, which is administered via nose spray, doesn’t get the job done. The CDC reports that FluMist does not protect against flu, and is making the recommendation that parents vaccinate their children using the traditional injectable flu vaccine this year. Last year, more than 146 million Americans were vaccinated against the flu. The FluMist option accounts for about a third of all flu vaccines given to children every year.

Flu-Mist is made by Medimmune, and like other vaccines, it provides a minute exposure to weakened strains of the virus. This exposure doesn’t cause illness, yet it’s enough to stimulate the immune system. If the individual is exposed to the virus later in the season, they won’t become ill. The flu vaccine has to be reformulated every year, because the virus mutates easily and multiple strains of the flu are in circulation every year. Therefore, the vaccine needs to be reformulated every year and contains a mixture of three or four versions of the current strains of the virus.

Therefore, the vaccine needs to be reformulated every year and contains a mixture of three or four versions of the current strains of the virus. FluMist and other vaccines distributed in 2015-2016 protected against a particular strain of H1N1 flu, an H3N2 strain and one or two influenza B strains.

The CDC rated the 2015-2016 flu season as a low-activity season, meaning fewer people were infected by the virus, compared with previous years. They credit last year’s flu vaccine, which had a high effectiveness rate combined with a high rate of use, for the decrease in

overall cases and opportunities for the virus to spread. Nonetheless, even low-activity flu seasons can prove deadly.

Flu kills between 4,000 and 50,000 people a year, and hits children and the elderly most severely. The parents of an 8-year-old girl who died from the flu this year, despite having received the FluMist vaccine months earlier, are asking why the CDC didn’t warn the public sooner about Flu-Mist’s ineffectiveness.

"How well the flu vaccine works (or its ability to prevent flu illness) can range widely from season to season and can be affected by a number of factors, including characteristics of the person being vaccinated, the similarity between vaccine viruses and circulating viruses, and even which vaccine is used," the CDC said.

Researchers are at work on a “universal” flu vaccine, which would protect against multiple strains of the virus. “The big question will be whether we can induce high enough titers of this cross-protective immune response, and whether it is really long lasting," said Peter Palese, PhD, professor and chair of the Department of Microbiology at the Icahn School of Medicine at Mount Sinai in New York City.

The World Health Organization reports that a strain of flu known as H5N1 is already beginning its spread in the southern hemisphere. Nigeria discovered the virus in

poultry operations in June and China discovered it in a group of lions in a zoo in the Hubei province. In South America, the flu has peaked earlier than usual and at high levels similar to the H1N1 outbreak of 2013.

Meanwhile, many physicians have already placed orders for FluMist, which is expected to be available for the 2016-17 flu season starting in August or September. However, as word spreads about its lack of effectiveness, some physicians groups are announcing that they won’t administer the nasal spray. Instead, patients will have to roll up their sleeves for the needle and protect themselves the old-fashioned way.

“The importance of preventing flu hasn’t changed,” said David Kimberlin, a professor of pediatrics at the University of Alabama at Birmingham. “What has changed is we have one less tool.”