As oceans heat up, fish are relocating, and conditions are ripe for war over access. 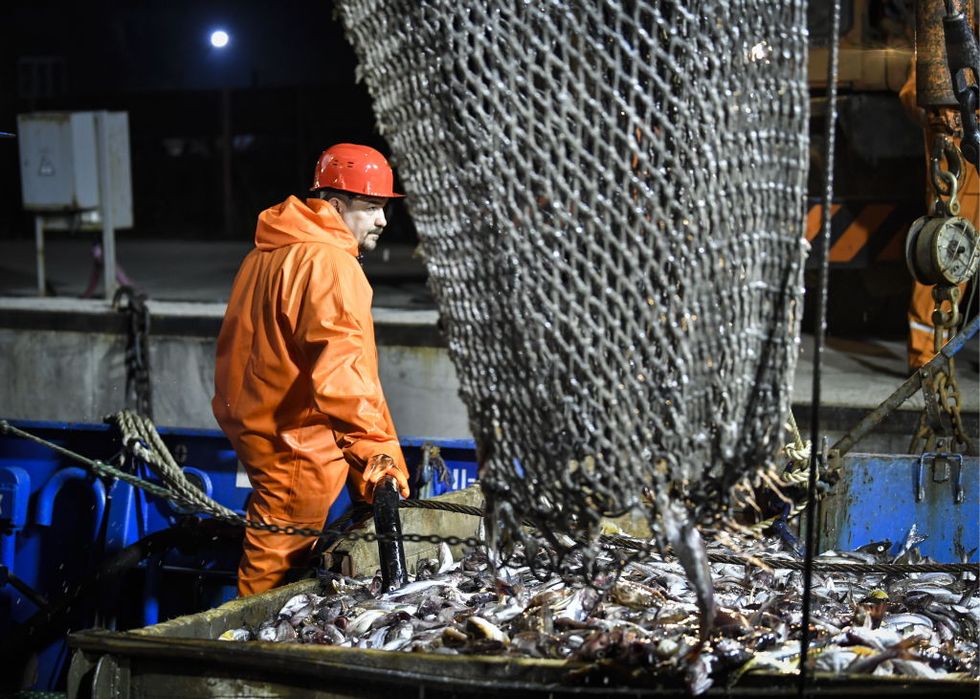 PRIMORYE TERRITORY, RUSSIA - MAY 29, 2018: Unloading fish from the hold of the Uraganny seiner (MRS-450) of the Dobroflot Fishing Company at a shore-based fish factory in the village of Yuzhno-Morskoye. Yuri Smityuk/TASS (Photo by Yuri SmityukTASS via Getty Images)

Fish and other seafood species are associated with various regions or nations. Icelandic cod, Alaskan salmon, Louisiana crawfish, Nile tilapia, Auckland oysters—specific species have unique habitat requirements. Water quality, temperatures and conditions all affect the types of fish that can thrive in an area. However, all around the world, conditions are changing. As the world’s oceans warm, historic fisheries are relocating. Countries that counted on finding adequate stocks of a specific species in their patch of the ocean are suddenly finding their fisheries are collapsing. As fish populations relocate, fishing operations are following them—sometimes into territories controlled by other nations.

One example: Within the last 10 years, Atlantic mackerel, one of the UK’s chief exports, relocated to cooler waters near Iceland. The resulting unsustainable fishing, trade embargoes, and boat blockades created tensions between the previously friendly countries and helped lead Iceland to drop its bid to join the EU.

Fish wars aren’t just between nations. A recent study of Australia’s fisheries pits ocean scientists against the fishing industry. A survey of fish populations published in the journal Aquatic Conservation found that in the past 10 years, populations in Australian fisheries have declined 36 percent in unmanaged waters, and 18 percent in managed waters. “To maintain some naturally functioning food webs … and associated ecosystem services … a greatly expanded network of fully protected marine protected areas is needed,” wrote the study’s authors, Graham J. Edgar and Rick D. Stuart-Smith of the Institute for Marine and Antarctic Studies at the University of Tasmania, and Trevor J. Ward of the University of Technology Sydney.

“Reports like this impact community perception of the fishing industry, and we’ve been beaten up for a long time by environmental NGOs and reports like this,” said Jane Lovell, the SIA’s chief executive.

“There are no perfect data, but these are as good as we’ve ever got, and anyone who’d ignore these warnings would do it at their own peril, I think,” said David Booth, a professor of marine ecology at University of Technology Sydney who was not involved in the study but supports its methodology.

Conflict over dwindling fish resources are likely to grow as the problem accelerates. Most commercial fisheries depend on cool, clean waters. As that becomes scarce, so will the fish, impacting economies and creating hunger in nations dependent on fish for protein.

The problem is "already rampant. It's been brewing under the surface," says Jessica Spijkers, a sustainability researcher with the Stockholm Resilience Center and co-author of the study. "People have died at sea because fishing boats are out where other boat operators didn't think they should be."

A new study published in Science predicts that by 2050, dozens of countries will see entirely new fisheries as populations move out of and into new waters. By 2100, 70 or more countries will be impacted. For some countries, like Iceland, new populations will create new opportunities and economies. For others, the oceans will empty, economies will dry up, and local communities that depended on the ocean for sustenance will need to look elsewhere for food. Future wars could be ignited over fishing rights and maritime boundaries.

“Basically, climate change is forcing species to move, jumbling up ecosystems,” says ecologist Malin Pinsky of Rutgers University in New Brunswick, New Jersey, who led the study with postdoctoral researcher James Morley, now at the University of North Carolina in Chapel Hill. “That’s not necessarily bad news. But we’ve already seen that even much smaller shifts in the distribution of marine species can cause real economic disruption, political friction, and challenges to fisheries managers. And here we are talking about potentially big shifts.”

"Even when there are enough fish to go around, what we've seen is that when countries can't cooperate, that often leads to competitive fishing—to a race to catch the fish when they're there. With climate change, there's potential for a future where disputes around fishing lead to less fish, less profit, less employment, and more concern about food supplies."

Problems are accelerating rapidly. In April, NOAA announced that the Earth experienced its 400th consecutive month with temperatures above the 20th century average; it hit 401 in May and 402 in June. In addition to gradual warming, ocean heat waves can cause rapid changes. Just as we experience heat waves on land, oceans experience unusually warm periods, lasting weeks or months, and causing havoc in marine environments. Periods of extreme ocean heat kill off kelp forests and corals, and impact marine ecosystems—and further impact fishing operations in those areas.

In order to maintain economically sustainable fisheries that can provide food for the most possible people, countries will have to learn to share, meaning new agreements and understanding will have to be made for nations that are impacted by migrating fish populations. The alternative is unmanaged, rampant fishing and fighting over rapidly dwindling stocks.

“A fishery that’s shared for the first time [is] like two kids facing off for the last piece of cake," Pinsky said. "They’ll race to grab it and get cake smeared all over the table.”