Great Gray Globs of Fat Are Lurking in Our Sewers 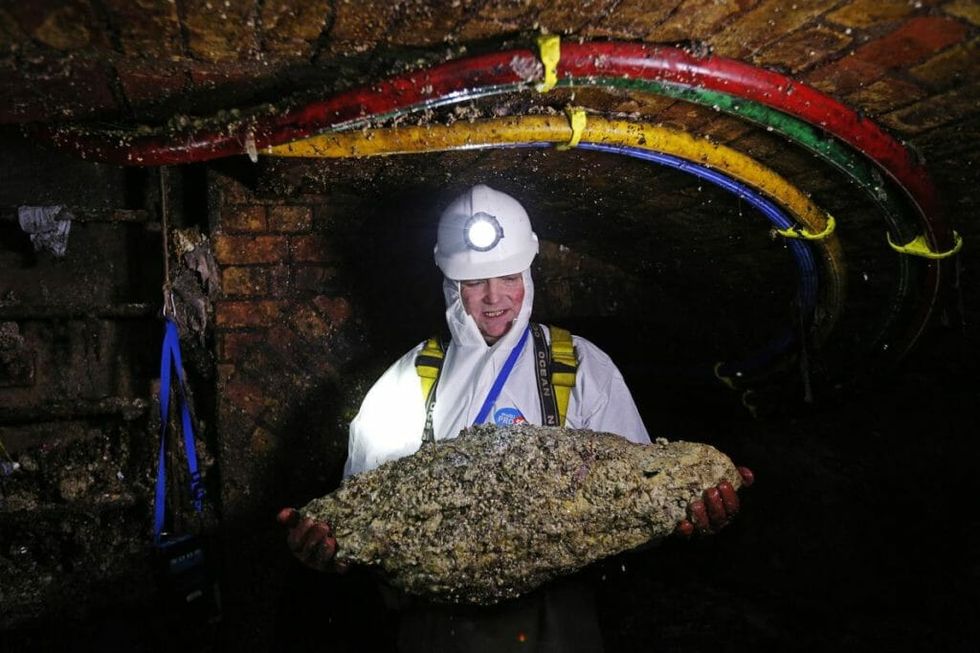 Humanity’s love of greasy, fatty food is accumulating in our bodies and in our plumbing systems. Giant blobs of hardened fat and grease  — “fatbergs,” as they are known to the wastewater industry — are forming in our underground sewer networks. The fatbergs are blocking pipes and toilets, and wreaking havoc on our infrastructure.

The problem starts when people wash greasy dishes or pour meat fat down the drain — a practice that isn’t just horrible for the pipes in your home, but causes problems along every stretch of the system. The fat doesn’t magically disappear, as we’d like to think. Instead, it collects with other fat in the system, and binds together, often with a flushable wipe or other non-biodegradable object acting as a foundation for that fat to grab onto and build upon. The fat reacts with calcium found in the sewer system and solidifies into a hard, smelly, grayish-yellow substance that can fill and block underground pipes and tunnels.

How big is the problem? A fatberg found in Ireland’s underground sewer system in June 2017 weighed a couple of hundred tons. They are often discovered only after they have caused problems. In 2013, toilets backed up in London’s Kingston borough, alerting authorities to the bus-sized fatberg lurking beneath the neighborhood. These fatbergs need to be tediously hand-removed by workers using shovels, one greasy scoop at a time. This summer’s Belfast fatberg cost more than $10 million to clear.

The problem is especially bad in the UK because of its centuries-old infrastructure and because restaurants are not required to use grease traps. In the U.S., a more stringent regulatory system keeps the large amount of fat produced by the fast food and other high-fat industries out of the system. In most US cities, restaurants are required to maintain their own grease traps. However, in recent years, as flushable wipes have become a popular item in US households, the problem is taking hold there as well.

The costs to society are considerable. “We clear a sewer blockage caused by fatbergs every seven-and-a-half minutes and spend more than £1m a month clearing them,” says Lawrence Gosden, head of wastewater at Thames Water. “Annually, there are around 366,000 sewer blockages in the UK.”

But maybe we’re thinking about this problem in the wrong way. Thames Water has joined renewables firm Argent Energy to investigate practical uses for the tons of fat it harvests from its sewer networks. Possibly, the congealed blob could be transformed into a fuel. First, though, someone would have the unpleasant task of sorting the fat to remove baby wipes and other solid matter.

“We have a problem with fatbergs, both in sewer networks and at sewage treatment centers,” said Simon Brum, strategic recycling manager at Thames Water. “Previously, what we’ve done is either extract the fatberg out of the pipes and send to landfill, or break it down and put it back through the system. Now we’re looking to see if we can use fatbergs in a clever way, and we’re working alongside Argent to do that.”

Argent had developed a process to turn fatbergs into biofuel. The company is currently collecting 30 tons of fatberg per week from just one Birmingham facility, and converting it fuel for buses. Another company, 20C, is building a power plant fueled by fatbergs in Beckton, East London.

Welsh Water has a “Let’s stop the block” program, Thames Water has a “Bin it – don’t block it” campaign, and in New York City, a “Cease the Grease” campaign is aimed at educating the public on the proper disposal of cooking fats.

A fatberg doesn’t begin with fat, however. A key ingredient of the problem is flushable wipes. Although these products are marketed as flushable, they cause havoc as they move through the system, clogging pipes and forming a foundation for fatbergs to build upon. The products have exploded in popularity, not just for babies but for adults, and they are exacting a heavy toll on the environment. Unlike toilet paper, which eventually breaks down, wet wipes contain plastic-based fibers that will never break down.

Dave Tichinel, Water/Wastewater Manager of Clintonville, Wisconsin’s city wastewater treatment plant said, "A lot of people have gotten in the habit of just throwing them down toilets and stuff, and the problem with that is they don't disintegrate. They get caught in pumps. We have to pull them, clean the pumps out. It's just a nightmare."

In Washington DC, the matter has even become — surprise — politicized. When local authorities tried to ban the sale of wet wipes made from non-biodegradable materials, citing enormous costs to the public, damage to infrastructure, and risks to workers who have to deal with the problem, Rep. Andy Harris (R-Md.) took the side of the fatbergs and tried to block the law. When conspiracy theorist Alex Jones promoted “tactical bath wipes” on his show, Infowars, comedian John Oliver responded with Infowipes, a mock “tactical assault wipe” product. The price? $1 million.

That’s about the cost to the public of removing a fatberg.