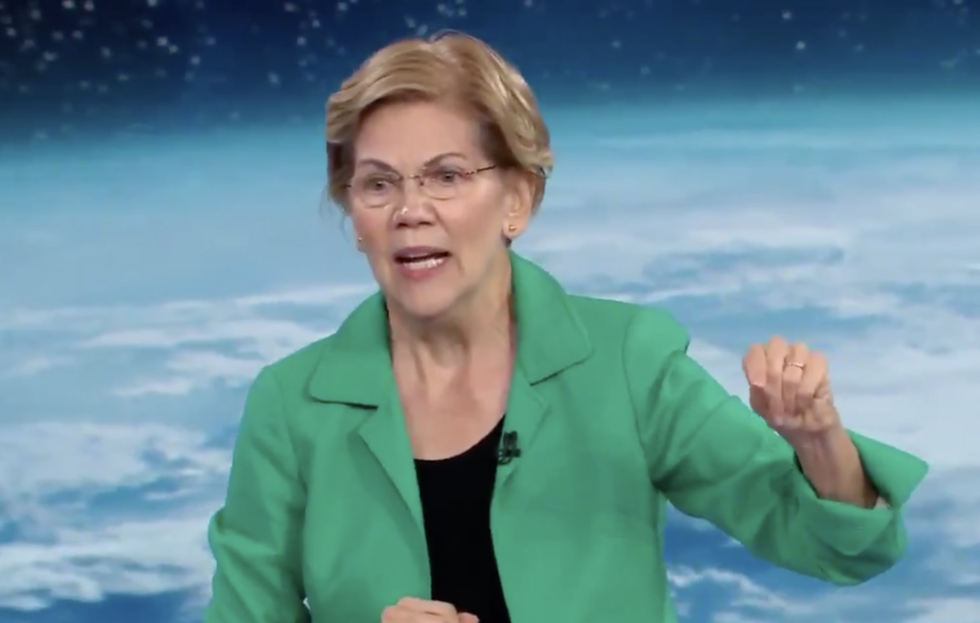 Democrats vying for the 2020 presidential nomination are racing to build a robust, effective plan against the global climate crisis to present to the electorate. This determination to do something was on full display at a seven hour CNN town hall focused on the environment, featuring the 10 candidates who qualified for the upcoming September debates.

Though it's difficult to stand out in a field of 10 people and in seven hours of television, Warren managed to do so, and she did it by proving an important point to CNN's Chris Cuomo.

Cuomo asked about lPresident Donald Trump's plan to "roll back" lightbulb regulations, prompting Cuomo to ask if she thinks the government has the place to tell Americans what kind of lightbulbs they can have.

Warren's response made an important point.

While Warren praised individual efforts to stop using plastic straws or to eat fewer hamburgers or to use more energy efficient lightbulbs, she also pointed out:

"Understand, this is exactly what the fossil fuel industry hopes we're all talking about...They want to be able to stir up a lot of controversy around your lightbulbs, around your straws, around your cheeseburgers, when 70 percent of the pollution, of the carbon that we're throwing in the air comes from three industries."

Republicans have been executing these red herring talking points flawlessly. Trump's 2020 campaign currently sells overpriced plastic straws emblazoned with Trump's name because "liberal paper straws don't work." When people point out that methane from cows being raised for their meat plays a factor in the changing climate, Republicans claimed they were trying to ban burgers.

In mere hours, the Trump campaign shared an edited video that included Warren's commendation for voluntary individual efforts to curtail the climate crisis, but none of what she said about the culpability of fossil fuel industries—making it appear that she condoned a ban on cheeseburgers and plastic straws.

All of a sudden, individual efforts to curtail climate change are suffocating a conversation that should prioritize corporations doing immediate, irrevocable damage to the environment to make a profit.

That's what Warren focused on in her answer to Cuomo. And when it comes to holding corporations accountable, Elizabeth Warren has got you covered.

@CNNPolitics @cnnbrk Thank you CNN for the Climate Town Hall. It was well done and informative. Looking forward to more of this!
— Alan R. Hoeffler (@Alan R. Hoeffler) 1567652283.0

Sadly, all too many comments proved her point.

@CNNPolitics @cnnbrk I'll be over here siping my soda and eating my cheeseburger while I change the lightbulb Pocahontas.
— Tim Sherman (@Tim Sherman) 1567677528.0

Watching the #ClimateTownHall. Are the Democrats going after my burger now? Might of misheard. So far this is how t… https://t.co/3CgBEUL0r8
— Lawrence Kaneshiro (@Lawrence Kaneshiro) 1567655129.0

The fossil fuel industry's efforts are working, and it's a long way to 2020. Hold on to your buns...or don't?