We May Need To Start Eating More Bugs 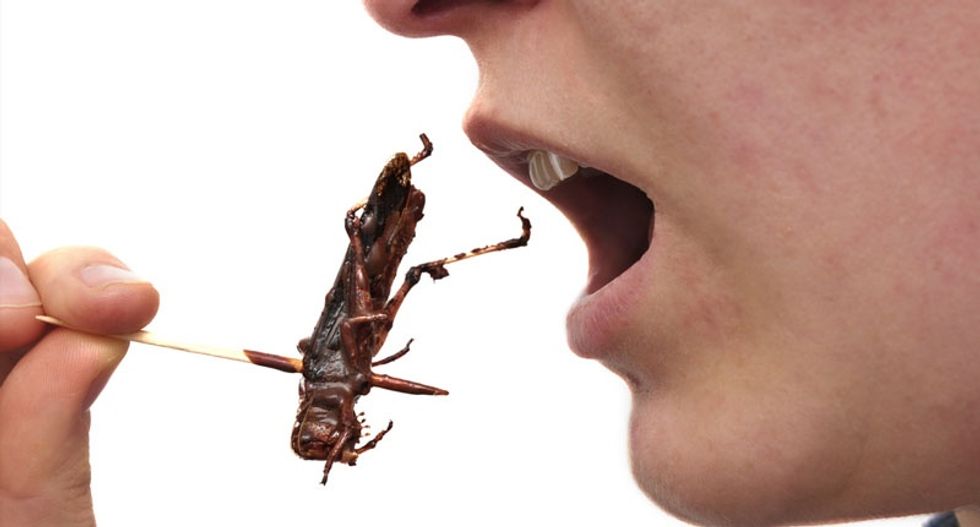 Everything you eat contains insects. In fact, the FDA permits a certain number of undetected insects, maggots and parasites (three maggots per can of tomatoes is A-OK) in every commercially sold grocery product. However, if humans are going to continue to exist on our increasingly impaired and overpopulated planet, we may need to intentionally eat more bugs.

Researchers from the University of Edinburgh have found that replacing half of the world’s meat with the likes of crickets and mealworms could reduce the need to clear-cut massive amounts of land for meat farming and considerably reduce the emission of greenhouse gases. Beef production is particularly damaging to the planet’s health, the study notes, and replacing it at least in part with other protein sources is critical.

“A mix of small changes in consumer behavior, such as replacing beef with chicken, reducing food waste and potentially introducing insects more commonly into diets, would help achieve land savings and a more sustainable food system,” said Dr. Peter Alexander, of the University of Edinburgh’s School of GeoSciences and Scotland’s Rural College.

The study, published in the journal Global Food Security, sought answers for the environmental problems presented by humanity’s increasing desire to eat meat. The study reviewed the impact of a variety of protein sources, including alternative sources of food, such as insects, meat alternatives like tofu, and lab-grown meat.

In the U.S., people consume seven billion animals annually, and meat agriculture is incredibly polluting and resource- and land-intensive. The production, processing and distribution of meat requires huge amounts of pesticides, fertilizer, fuel, feed — which takes its own environmental toll — and water, while releasing greenhouse gases, manure and a range of toxic chemicals into our air and water. In addition, clear-cutting land for agriculture removes trees that help cool the planet and clean the air. A 2009 study found that four-fifths of the deforestation across the Amazon rainforest could be linked to cattle ranching.

(Or, we could consider a vegetarian diet. Substituting beans for beef would result in an immediate 50 to 75 percent reduction in greenhouse gases in the U.S., according to a new study. Bean production is one-fortieth as greenhouse-gas-intensive as beef production.)

Obviously, the greatest barrier to convincing consumers to intentionally choose insect-based foods is the cultural barrier — or “ick factor.” But in some nations, eating insects is part of the national diet. The UN reports that two billion people deliberately include insects in their diet. Crickets are the most popular culinary insect around the world. In Laos, fried crickets are a popular street food. In France, grasshoppers join snails and frogs in the kitchen. A California company called BugMuscle is marketing an insect-based protein supplement.

Insects are generally high in nutritional value and beat out both meat and fish in protein content and quality. They're also rich in fiber and healthy micronutrients including copper, iron, magnesium, phosphorus, selenium and zinc. An added plus: They are seemingly everywhere, and abundant.

A recent push to limit pesticide use has drawn attention to the collapse of butterflies, bees and lightning bug populations. However, entomologists note that other, less appealing insect populations have crashed as well. "We have a pretty good track record of ignoring most noncharismatic species," which most insects are, says Joe Nocera, an ecologist at the University of New Brunswick in Canada.

Anecdotally, scientists call it the “windshield phenomenon” — in the past, vehicle owners would need to clean off hundreds of smashed insects from the front of their vehicle. These days, you may have noticed that cars stay fairly clean. While few scientists track the populations of less “charismatic” insect populations, anecdotal evidence from birdwatchers, insect collectors and naturalists is mounting. The Krefeld Entomological Society does a yearly insect catch to evaluate numbers, which naturally fluctuate. But in recent years, they have noticed a trend towards population collapse. By comparing numbers over the past three decades, they have seen a nearly 80% decline in catch numbers.

In addition to noting an overall drop in insect biomass, the Krefeld data gives insight into specific insect populations. For example, hover flies—important pollinators often mistaken for bees—are in steep decline. In 1989, the group's traps in one reserve collected 17,291 hover flies from 143 species. In 2014, at the same locations, they found only 2,737 individuals from 104 species.

The decline of insects might sound like good news to humans who are bugged by them, but these losses travel up the food chain. Across North America and Europe, species of birds that eat flying insects, such as larks, swallows and swifts, are in steep decline. "If you're an insect-eating bird living in that area, four-fifths of your food is gone in the last quarter-century, which is staggering," said Dave Goulson, an ecologist at the University of Sussex in the United Kingdom, who is working with the Krefeld group to analyze and publish some of the data. "One almost hopes that it's not representative—that it's some strange artifact."

Scientists point at agricultural practices, as well as pesticides, for the decline. In the case of pollinators, these insect population losses ultimately will harm not just wildlife, but the agriculture systems that humans depend on. Additionally, while beneficial insects are being driven to extinction, some of the pest insects they preyed upon are growing in numbers, while other pests are developing resistance to the chemicals that are now abundant in our environment.

"We won't exterminate all insects. That's nonsense. Vertebrates would die out first,” says Martin Sorg, an entomologist who curates the Krefeld insect collections. “But we can cause massive damage to biodiversity—damage that harms us."