Yes, Climate Change is Behind This Weird Weather 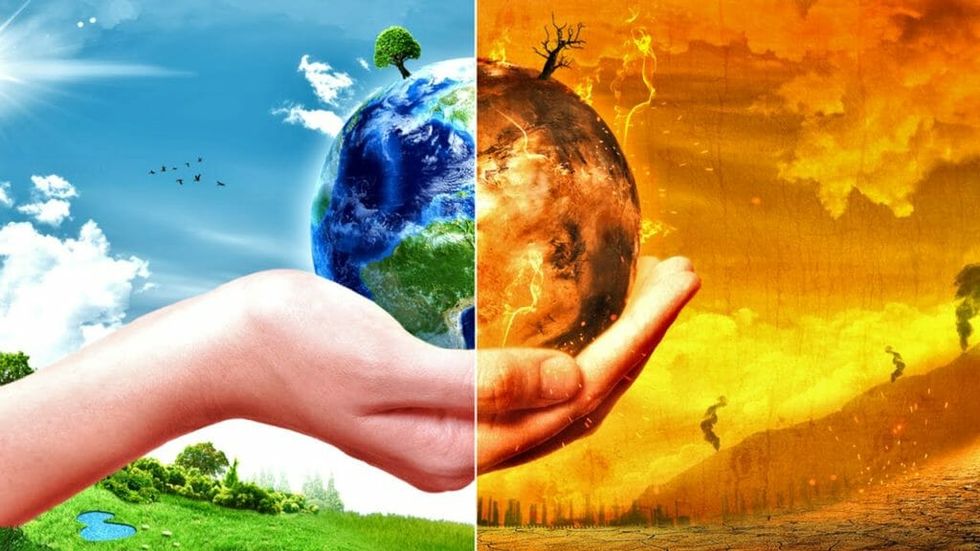 Has it been a weird winter? No matter where you live, the climate is changing, and winter as you knew it has become less predictable. This year, if you live in Minneapolis, you had thunderstorms on Christmas Day and your annual ski race is being run on fake snow. If you live in Portland, Oregon, you spent 10 days trapped in your house because a freak ice storm shut down your city. If you live in Birmingham, New York, you got buried under a record-breaking 54 inches of snow during Winter Storm Argos, just one year after a record-setting low snowfall year — and just one day after the area set a record with 70-degree high temperatures. If you live in Los Angeles, you’ve gone from years of record drought to rains that amount to 216 percent of the “normal” amount for the past four months. If you live in Oklahoma, the thermometer just reached 100 degrees in the dead of winter. If you live in the North Pole, the temperature soared 50 degrees above normal.

This is what climate change looks like. The Earth’s average surface temperature rose between 1.1 to 1.6 degrees F. between 1906 and 2005, and the rate has doubled in the past 50 years. This does not mean our average daily temperature has gone up just a degree. It means that our climate is now changing at such an accelerated rate that weather patterns are becoming unpredictable and dramatic, with devastating storms, tornados, hurricanes, floods, heat waves, fires and droughts becoming the new normal. Weather is not just getting warmer, it’s getting weirder.

Munich Re, one of the world’s largest insurance companies, has compiled a database of natural disasters going back to the eruption of Mount Vesuvius in A.D. "Our figures indicate a trend towards an increase in extreme weather events that can only be fully explained by climate change," says Peter Höppe, head of Munich Re's Geo Risks Research/Corporate Climate Center: "It's as if the weather machine had changed up a gear.”

Climate change is of particular concern to insurance companies, which often pick up the tab for loss and damages that businesses and homeowners incur in the event of extreme weather. Hurricane Katrina, for example, ultimately cost insurers $43 billion.

The Environmental Protection Agency outlines nine key sectors that are being impacted today by these unusual weather patterns: agriculture, coasts, ecosystems, energy, forests, human health, society, transportation and water resources. Don’t live on the coast? Here’s what you might see closer to home.

As sea levels rise and rainfall patterns change, many places are observing an increase in mold or fungus due to increasing humidity. Those dramatic rain events and floods force moisture into buildings, where it becomes trapped, leading to ongoing mold issues. From a structural standpoint, mold damages buildings. From a health standpoint, increase of mold leads to increasing rates of asthma, allergy and respiratory illnesses.

The changing climate is creating opportunities for insect populations to move into new territory. Warming temperatures and changing moisture patterns mean that regions that were once too cold to support certain pests are now becoming more welcoming, which impacts crops, forests and human and animal health. Without hard freezes, insect populations are able to increase and spread. Tropical diseases like dengue and Zika are now spreading to regions that have never experienced them before. Tick-borne illnesses like Lyme disease are on the rise as ticks increase their range and the amount of time during the year they spend feeding. Meanwhile, the beneficial insects like bees that we depend on for pollination are struggling not only with habitat loss and pesticides, but with the impacts of climate change on their feeding patterns and hive health.

Within the span of a generation, Americans have gone from a seasonal crop cycle to a world where fresh strawberries are available every day of the year, not to mention exotic fruits like pomegranates and goji berries. But that could change quickly. As climate change increases the impact of storms, pests and crop diseases on agricultural production and renders some regions unusable for agriculture, food supplies are expected to decrease and become more expensive. In addition, climate change, combined with overfishing, is dramatically decreasing seafood stocks.

According to NASA, as the world consumes more fossil fuel, greenhouse gas concentrations will continue to rise, and Earth’s average surface temperature will rise with them. Based on a range of plausible emission scenarios, average surface temperatures could rise between 2°C and 6°C by the end of the 21st century, dramatically increasing the intensity and frequency of weather events.

As the effects of climate change accumulate, some scientists say we may have reached the point of no return. 2016 was the hottest year on record, and the third year in a row to break consecutive heat records. Of the 17 hottest years on record, 16 of them have occurred since 2000.

A global effort to curb emissions, protect and expand existing forests and switch to low-impact energy sources has the potential to slow the progress of climate change, but such a concerted effort is unlikely. In the hours following the  Donald Trump’s inauguration, the U.S. government removed climate change information from its website. In the following days, the administration announced plans to revive the Keystone XL and North Dakota pipelines. Next, Trump is expected to withdraw from the Paris Climate Agreement, in which 196 nations agreed to come together in a last-ditch effort to save the planet from the effects of climate change by limiting carbon emissions. The Earth has already warmed a degree, and the agreement asks countries to take measures to limit further warming to two degrees; without it, the planet is expected to warm by 3.5 degrees by 2100.

However, if short-term financial rewards trump long-term security for future generations, the administration may reconsider. Positioning itself as an isolated nation in a global community means the U.S. will be left out of the profits as well as the costs of participation. The economy and national security could suffer, says Andrew Light, a distinguished senior fellow in the climate program at the World Resources Institute, who was also part of the climate team in the State Department leading up to the agreement.

"I think if the U.S. withdrew, then it would probably make it much harder for [U.S. renewable energy companies] to sell their products around the world, because they've got competition," says Light.

In 2016, China announced plans to invest $361 billion into renewable energy. The initiative is anticipated to create more than 13 million jobs and enable the country to reduce its dependence on polluting fossil fuels, and to lead the world in developing the innovations that could power the next century. China’s recognition of climate change and its embrace of initiatives to solve it could make the country great — while the U.S. clings to dirty 18th century fuels.