Climate Change May Mean The End Of Your Morning Coffee

Climate change will cause coffee acreage to shrink by 2050. 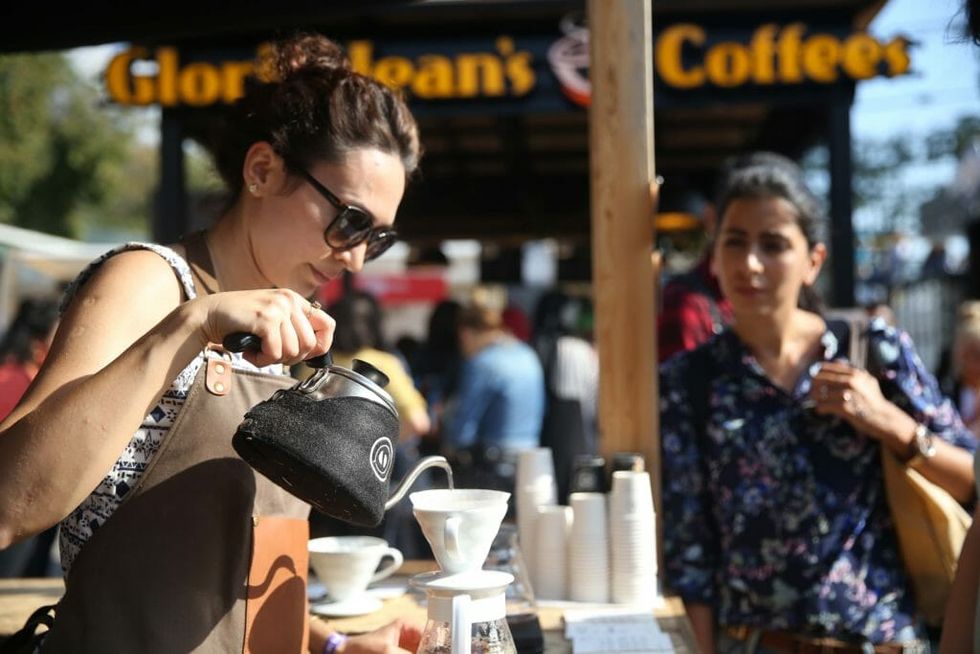 ISTANBUL, TURKEY - SEPTEMBER 22 : A woman pours hot water into a cup during the Istanbul Coffee Festival (ICF) at Kucukciftlik Park in Istanbul, Turkey on September 22, 2017. 4th Istanbul Coffee is being held between the dates of 21-24 September with the motto of "Lifecycle of Coffee" as hundreds of coffee brands are displayed. Event includes special design products, acoustic concerts, workshops, seminars and art exhibitions. (Photo by Veli Gurgah/Anadolu Agency/Getty Images)

If Internet memes teach us anything, it’s that some people can’t function without the glorious nectar of the coffee bean. If you’re among those who rouse only to a steaming cup of Joe, it may be time to consider tea instead: According to anew report, the world's largest coffee-producing regions could shrink by as much as 88 percent by 2050 as a result of climate change.

This impacts more than just your average American’s ability to function; the global export of coffee averages $19 billion dollars annually, according toThe Climate Report’s analysis of climate change on coffee production. Coffee production directly sustains 125 million livelihoods, 25 million of whom are small farmers. To put that in perspective, coffee represents 17% of the export earnings of Nicaragua and 33% of Ethiopia.

Some of these countries, such as Guatemala, Honduras, Indonesia, and Vietnam, have already been ravaged by drought or intense flooding due to climate change, as well as devastating earthquakes, which has forced typically low lying coffee crops to move further uphill.

"[Climate change is] the single most significant threat to the supply of coffee, and quality coffee in particular," said Hanna Neuschwander of World Coffee Research, an organization that explores issues of coffee cultivation in relationship to climate change,told Inside Climate News. "It's not just because it's harder for the plant to function in hotter temperatures. We're also seeing increased prevalence of diseases and pests, which are happier in those hotter climates."

The results are dramatic enough that major coffee suppliers like Starbucks and Lavazza havepublicly acknowledged that they will have to rethink their business models, and consumers will have to face potential shortages and higher prices in the foreseeable future.

There are two main types of coffee cultivated today. “Robusta” holds up better under heat and pests, but its taste is not ideal. “Robusta…has a stronger, harsher taste, with a grain-like overtone and peanutty aftertaste,” According to the lifestyle magazine,The Kitchn. It also has nearlydouble the level of caffeine as arabica, the other main type of coffee, which makes it pack a very unpleasant, heart-racing punch.

The variety most of us find in our Starbucks cups is arabica, which has sweeter, more chocolaty, and generally pleasant notes on the tongue. Unfortunately, arabica is a picky grower, according toArs Technica. At the equator, it will only grow at altitudes above a kilometer, and with a preference for specific types of rainfall patterns. The further away from the equator, however, the conditions get a little laxer. Unfortunately, it’s these easy-grow areas that are most ravaged by climate change.

The rising temperatures of climate change will eventually push the tasty arabica crops to higher altitudes, reducing the surface area by as much as half by mid-century. As much as60% of the arable land for coffee is carbon-rich tropical forest lands, which could put these remaining locations at risk of deforestation as coffee producers seek new land.

"That's an issue," said William Gould, a co-author of the Puerto Rico report and a forest scientist with the U.S. Forest Service's International Institute of Tropical Forestry toldInside Climate News. "As climates become warmer and drier, the cooler and wetter environments move up in elevation. But it's just a fact of geography—you run out of space, you can't continue to go up. That's unique to island and to tropical environments. You don't have the latitudinal shifts you can make."

Some farmers have seen this coming and have adapted, such as by blending robusta-arabica hybrids. "Rising temperatures happen over years,"Neuschwander said. "But drought and disease can be so shocking to a farmer. They don't have the resources to weather that storm. It's often not the trajectory of climate change that would push a farmer out, but a more short-term shock that may be linked to climate."

As if this were not bad enough news, it could get worse. In order to keep these remaining coffee plants successfully producing, we need pollinators, especially bees. But bees have not been having an easy time of things in the last few years, and they are sensitive to climate change, as well.Rebecca Irwin, an associate professor at Dartmouth College, investigates the timing of natural phenomenon, such as when bees pollinate flowers. "When the snow melts earlier, the flowers are going to emerge earlier and they’re going to bloom earlier,"she told Smithsonian. "We don’t really understand if the bees are going to follow suit."

Plus, as the planet continues to heat up, many bee species are moving north, according to an article inNature, “As temperatures rise, the southern limits of many North American and European bumblebee species’ ranges are moving north — by as much as 300 kilometers in some cases, researchers report in Science. But the northern edges of the bees’ ranges are staying in place, leading to an overall contraction of the insects’ habitat.”

What this means is that there aren’t going to be enough bees to pollinate everything that grows.

Domesticated bees raised by local farmers can certainly increase the coffee’s pollination process, but researchers have found that adiversity of pollinator species tends to produce a better coffee yield.

In this regard, South America may have a leg up, since coffee-growing regions tend to have higher bee population diversity. This may protect against the impacts of climate change on the sensitive winged insects. One report estimates that even regions hardest hit will still have an average of five bee species that can survive the climate.

Researchers continue to be hopeful that they can engineer more tolerant and adaptive varieties before people begin to turn on neighbors over a cup of coffee.

In the meantime, consumers can make a small dent in their guilt, at least, by only purchasing“carbon neutral” coffee from countries that have committed to reducing their carbon emissions to zero by 2021, such asCosta Rica.

"We're reducing our risk by planning ahead," Gould said. "Coffee is a unique crop. There's just a few varieties that are grown around the world, and everybody has to have their cup of coffee in the morning."

Climate reports are not so optimistic, with some predicting coffee could be essentiallyextinct by 2100. The kinds of research and skills required to adapt coffee farms may be beyond the reach of small farmers in these less developed, and poor countries.

Better drink your coffee while it’s hot, and still around.