California Is Going All in on Solar Energy, and Soon Will Be Saving Twice What They Spend 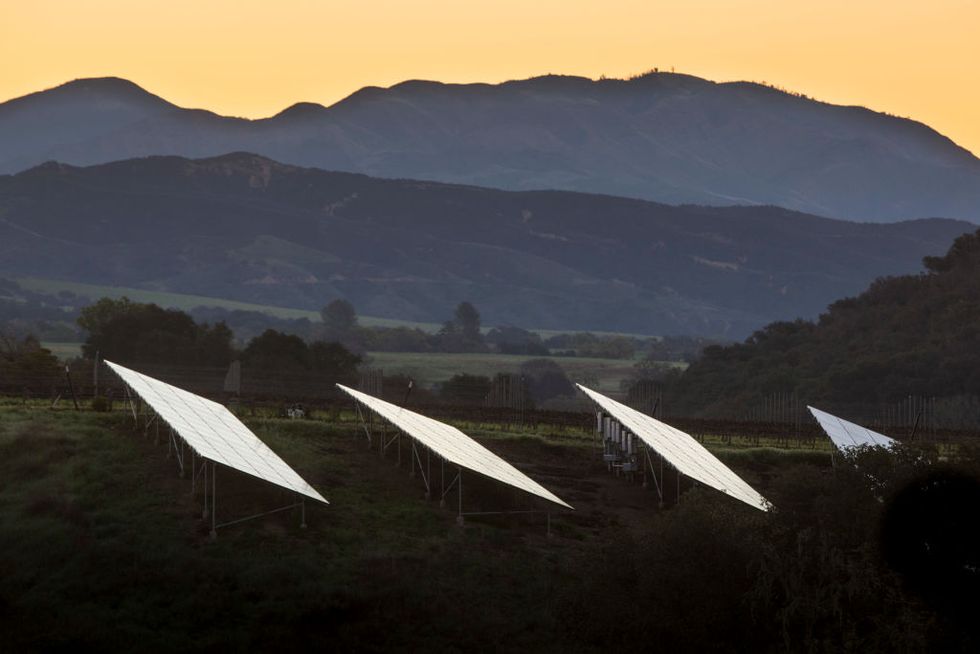 SANTA YNEZ, CA - MARCH 30: A hilltop solar panel array is viewed at sunrise along Happy Canyon Road on March 30, 2018, near Santa Ynez, California. Because of its close proximity to Southern California and Los Angeles population centers, combined with a Mediterranean climate, the coastal regions of Santa Barbara have become a popular weekend getaway destination for millions of tourists each year. (Photo by George Rose/Getty Images)

Starting January 1, 2020, all new homes built in California will be outfitted with solar panels. The new rule will apply to all homes, apartment buildings, and condos three stories or under.

The California Energy Commission voted unanimously for the housing mandate, which also includes new insulation and air filter requirements for newly built homes. More than 80,000 new homes are built every year in California. The requirements are expected to add $9,500 to the cost of a home, or $40 a month on a 30-year-mortgage. However, the energy savings to the homeowner will save $80 a month, making the measure not just energy smart but money smart.

"The cash flow position of the homeowners is actually improved in these homes," said Commissioner Andrew McAllister.

The main impetus behind the measure, however, is California’s effort to reduce greenhouse gas emissions by 40 percent by 2030. The state, long at the forefront of environmental initiatives, sets a higher standard for appliance energy efficiency, fuel economy standards in automobiles, and toxins. Often, California's standards become the nation's standards as manufacturers opt to produce one product that can be sold everywhere, rather than a separate, more efficient one for California.

California is already the largest solar market in the US, with 20 percent of new homes coming with solar panels. “Adoption of these standards represents a quantum leap in statewide building standards,” Bob Raymer, senior engineer of the California Building Industry Association, said. "You can bet the other 49 states will be watching closely what happens.”

Arizona, another state with abundant sunshine, is considering such a measure. “Solar has really taken off in Arizona,” said Bret Fanshaw with Environment Arizona.“We should look into ways to make that happen.”

Businesses involved in the solar panel production, installation and energy storage industries, such as Sunrun, the largest US solar installer, and Tesla, which is developing a range of solar-powered technologies, backed the measure. Critics, however, say housing is already too expensive in California, and the upfront $9,500 to outfit homes with a solar system could exacerbate inflated housing costs, even though on a monthly basis, the panels immediately save more money than they cost by reducing heating and cooling bills.

“With home prices having risen as much as they have, I think home buyers would find it a little distasteful to be forced to pay more for solar systems that they may not want or feel like they can’t afford,” said Brent Anderson, a spokesman for homebuilder Meritage Homes Corp. “Even though, in the long term, it’s the right answer.”

In Sacramento, air quality reached unsafe levels 39 days in 2017, far in excess of the three days the American Lung Association says is a “failing” level of ozone exposure. Water pollution is also suffering under human pressure; the number of California rivers that failed to meet basic water quality standards for swimming, fishing and drinking shot up 170 percentfrom 2006 to 2010. The state has 8 of the 10 most polluted cities in the nation. California’s more strict environmental laws reflect its more urgent situation; without its strict laws on coal plants and vehicle emissions, it would be much worse off, says the American Lung Association.

As the Trump administration rolls back environmental protections across all areas, including new limits on vehicle carbon emissions enacted during the Obama administration, California is pushing back. The state, joined by 17 other states, has sued the EPA, claiming the agency has violated the Clean Air Act and its own regulations with its weak new standards. Since California is the largest car market in the country, automakers may decide to meet that state’s higher efficiency standards rather than the lax standards favored by the current administration.

“All of this pushing and pulling at the federal level is in many ways irrelevant if California is not at the table and willing to ease these car regulations that they’ve implemented,” said Rebecca Lindland, senior director at Kelley Blue Book.