Armadillos carry leprosy, and their range is spreading north. 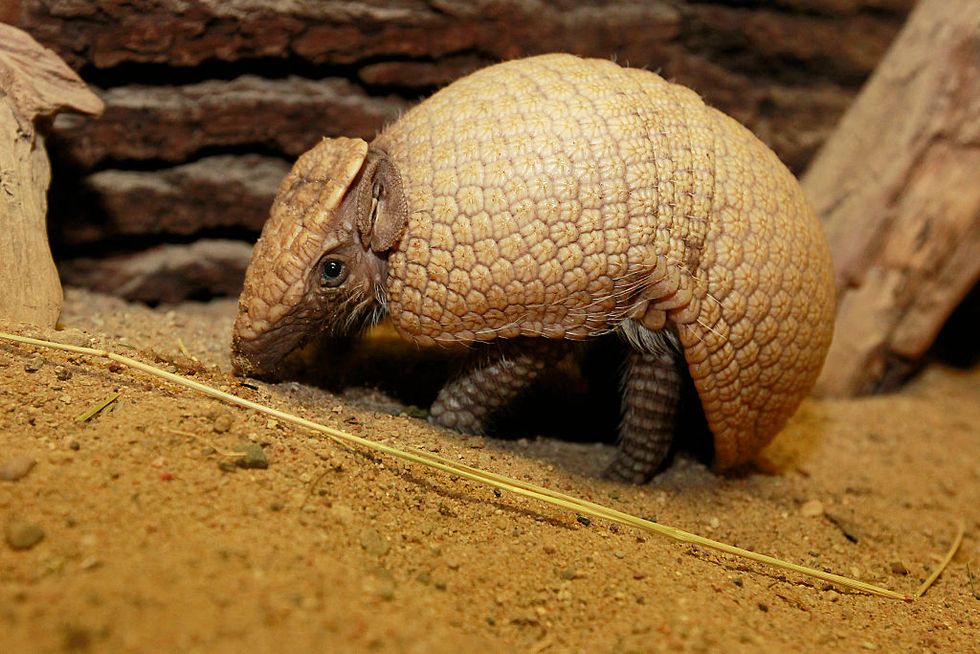 Eat an armadillo? Sure—if you live in Brazil, Tennessee, or other parts of the world where the armored creature is just another source of protein. Armadillo is an uncommon, but not unheard of part of many people’s diet. It is said to taste similar to chicken. Hunters capture wild armadillos, and some people also raise the animals in captivity like pigs, fattening them up on household scraps. But there’s a compelling case for leaving the strange creature alone.

Researchers have found a link between armadillos and a disease that has mostly disappeared in many parts of the world: leprosy. In a study published in the journal PLOS Neglected Tropical Diseases, researchers found that 62 percent of the nine-banded armadillos sampled in Brazil’s western state of Pará showed signs of exposure to the bacterium that causes leprosy, also known as Hansen’s Disease. They also found that people who eat nine-banded armadillo meat had higher concentrations of leprosy antibodies in their blood. (The team offered free treatment to those found to have the disease.)

John Spencer, an immunologist at Colorado State University and senior author of the study, says that 65 percent of people in that part of Brazil eat armadillo at least once per year, although it is technically illegal to hunt them there. “Armadillos are kind of a delicacy—think about it like lobster,” he says.

They are eaten in the U.S. as well; in states such as Texas, Florida and Tennessee, they can be legally hunted year-round and are sometimes called “poor man’s pork,” “Hoover hog” and “possum on the half-shell.”

“If you’re poor and you need protein in your diet, people do what they need to do,” Spencer says. In Brazil, it’s included in dishes like armadillo liver ceviche, a mixture of raw meat and onions that is popular in some parts of the country. That meal is particularly problematic, as leprosy-causing bacteria have been shown to concentrate in the liver, as well as the spleen. Even people who don’t eat the armadillo may be able to contract leprosy through handling the animals; the disease is spread by contact with an affected individual or animal, and may incubate over a period of years. Some researchers believe that gardening in soil or engaging in outdoor activities in armadillo habitat could also transmit the bacteria. But a faster way to contract the disease is by eating an infected animal.

A least 25,000 people in Brazil are diagnosed with leprosy every year. Meanwhile, in the U.S., only 200 cases of leprosy are diagnosed each year—but 25 percent of those are also associated with armadillos. So are armadillos giving humans the disease? Actually, it’s the other way around.

“People brought leprosy from Europe, with the ships that came from the colonizers,” Spencer says. A team of French researchers found that leprosy probably originated in East Africa and the chronic bacterial disease was spread by colonialism and the slave trade.

Leprosy has existed in places with and without armadillo populations, and it’s inspired fear for millennia. It’s known for causing unsightly and painful lesions on the skin, and in some forms of the disease, a person can be covered with large, disfiguring lumps. It can also cause nerve damage in the extremities, sensory loss in the skin, and muscle weakness or paralysis.

To prevent transmission, people with the disease, known as lepers, were often exiled to leper colonies, a practice that began in the Middle Ages and continued well into the 1900s. The disease was so common in France in the 13th century that more than 2,000 leper facilities were built to contain all the infected people. In China, as recently as the 1930s, people with leprosy were burned alive to prevent the spread of the disease.

The last leper colony in the U.S. is in Hawaii. Kalaupapa, an isolated peninsula off Molokai, is still home to a handful of people infected with leprosy, although antibiotics are now available to treat the disease, and people with leprosy are no longer sequestered from society. The National Park Service designated Kalaupapa a National Historical Park in 1980 and once the last patient dies, the area—one of the last undeveloped places in Hawaii and home to many rare species—is likely to become fully opened up to tourism. Another leper facility in Louisiana closed in the late 1990s.

So what does the future hold for this ancient disease? The CDC says that thousands of cases of the disease are diagnosed every year, and two million people are permanently disabled as a result of Hansen’s disease. Right now, most of those people are in Indonesia and Brazil. The disease is now treatable with a multi-course mix of antibiotics over a period of one to two years. However, any nerve damage that occurs before treatment is permanent. So long as people are treated with antibiotics, preferably early, they won’t spread it further.

However, the bacterium is still out there, and many armadillos carry it. Armadillos thrive in hot climates, and as the Earth heats up, their ranges are spreading. In the U.S., the nine-banded armadillo, which is native to Latin America, has extended its range northward and is now found not only in warm southern states like Texas and Florida, but is now seen as far north as Kansas, Tennessee,South Dakota, and the Iowa state line.

They have no predators—except for cars. So if they aren’t where you are now, chances are good they will be there soon. But you may want to pass on that armadillo dish.