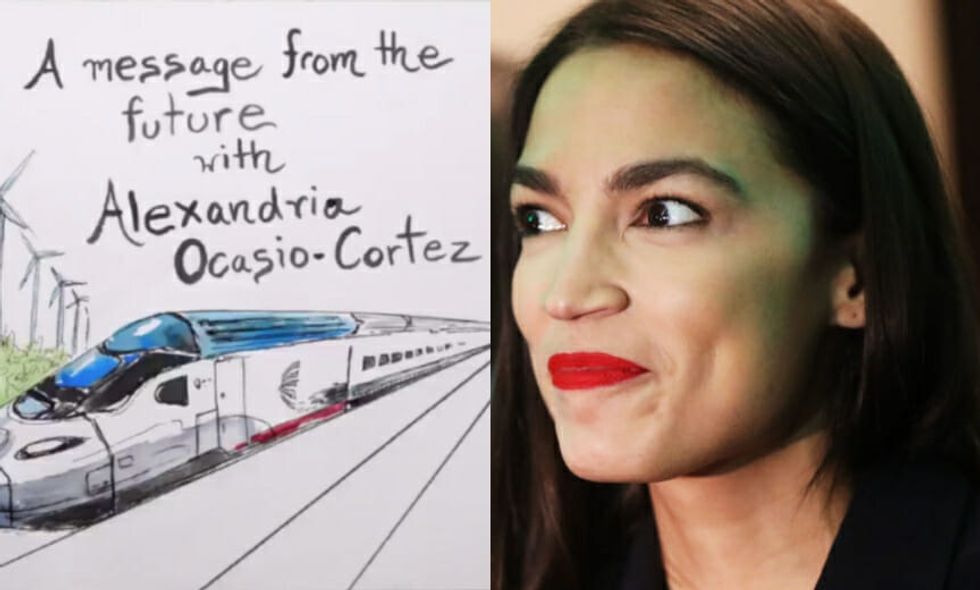 Congresswoman Alexandria Ocasio-Cortez (D-NY) teamed up with The Intercept to produce an animated video about climate change and the need for immediate action to stave off impending environmental catastrophe.

The title, Art of the Green New Deal, is a clever and super shady twist on The Art of the Deal, the best-selling book from the 1990s that bears President Donald Trump's name, though it was written by his former friend Tony Schwartz.

The seven-minute short film is a sobering reminder that scientists have been sounding the alarms about human-driven climate change for decades and that the powers that be have worked tirelessly to suppress the truth in the name of profit and retention of power. However, it's not without optimism: the film is framed as a "message from the future"—after lawmakers and citizens banded together to save the world in the nick of time.

"They and others spent millions setting up lobby groups and think tanks to create doubt and denial about climate change," AOC, the co-writer and narrator, recalls. "It was an effort to attack and dispute the very science they themselves had been doing. And it worked. Politicians went to bat for fossil fuels and these massive corporations kept digging and drilling, mining and fracking, like there was no tomorrow."

For AOC, climate change is personal. She referenced Hurricane Maria's devastating path through Puerto Rico, the place of her family's heritage, in 2017, as well as climate scientists' warning the following year that humanity only has 12 years left to halve its carbon emissions before irreversible damage is done to the planet.

This is why she and other Democrats introduced the Green New Deal - a series of steps we need to take as a society to transform our economy and energy grid into sustainable models that benefit everybody and protect the environment.

It also envisions a future in which human civilization gets its collective sh*t together while grappling with the consequences of decades-long inaction.

Ocasio-Cortez shared the video with a call to action:

"Climate change is here + we’ve got a deadline: 12 years left to cut emissions in half. A #GreenNewDeal is our plan for a world and a future worth fighting for. How did we get here? What is at stake? And where are we going?"

The video quickly went viral, having earned nearly 15,000 retweets and more than 35,000 'likes' by Thursday afternoon.

@AOC This is very inspiring even for us non-americans (or me at least 😄). A vision worth striving for the whole world. Thank you.👍
— Mika Saastamoinen (@Mika Saastamoinen) 1555527089.0

One thing is clear, the 29-year-old Bronx native is not backing down.

AOC is a powerhouse.

Trump, meanwhile, continues to deny the reality of anthropomorphic climate change. He has mocked the Green New Deal and spread misinformation, like the laughably false right-wing claim that AOC wants to ban cows.

Last month, the president shared a quote on Twitter that refers to climate change as "fake news" and "fake science."

Patrick Moore is not a Greenpeace co-founder and is not taken seriously within the scientific community.

Nevertheless, the United Nations recently issued dire warnings to us all: clean up our act, or potentially face climatological armageddon by the end of the century.

Instead of listening to the experts and making necessary changes, however, global carbon emissions reached an all-time high in 2018 with no signs of abating.

“[Current] energy and climate policies are not sufficient to overcome the growth in economic activity or energy-use growth,” said Glen Peters, research director at Norway's Center for International Climate Research and author of the Global Carbon Project's report. “So there’s no other alternative but to ramp up policies, basically, otherwise emissions will keep rising.”