There Are Hundreds of Dormant Volcanoes Underneath Antarctica. Let's Hope They Stay That Way 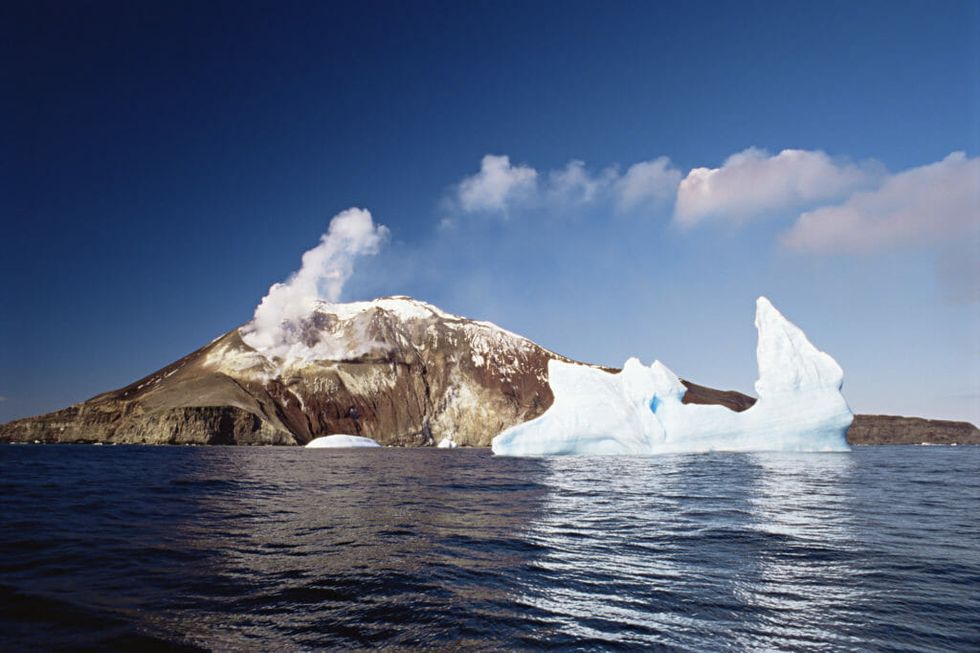 It turns out that Antarctica is just as hot as it is cold. While most of the continent lies beneath a thick — albeit quickly melting — sheet of ice, a volcanic field containing at least 138 dormant volcanoes has been discovered deep underneath the surface of this polar continent. If they erupted, the consequences could have a dramatic impact on life on Earth.

Two kilometers below the surface of west Antarctica, scientists have discovered a vast field of volcanoes, the largest as high as Mt. Eiger in Switzerland, which comprise what is likely the largest volcanic region on earth. A survey conducted by Edinburgh University researchers discovered 91 previously unknown volcanoes in the region this year, and there may be even more.

“We were amazed,” said glacier expert Robert Bingham. “We had not expected to find anything like that number. We have almost trebled the number of volcanoes known to exist in west Antarctica. We also suspect there are even more on the bed of the sea that lies under the Ross ice shelf, so that I think it is very likely this region will turn out to be the densest region of volcanoes in the world, greater even than east Africa, where Mounts Nyiragongo, Kilimanjaro, Longonot and all the other active volcanoes are concentrated.”

The discovery raises the question of what would happen if the region were to experience a significant eruption. The scientists say it could further destabilize some of the region’s ice sheets, which have already been affected by global warming. Meltwater outflows into the Antarctic Ocean could trigger sea level rises.

“If one of these volcanoes were to erupt it could further destabilize west Antarctica’s ice sheets,” said Bingham. “Anything that causes the melting of ice – which an eruption certainly would – is likely to speed up the flow of ice into the sea. The big question is: how active are these volcanoes? That is something we need to determine as quickly as possible.”

A team from NASA’s Jet Propulsion Laboratory has identified a massive plume of molten mantle material underneath the ice. These plumes can be found elsewhere in the world, including underneath Iceland, Hawaii, and Yellowstone National Park. Yet at first, scientists were skeptical that Antarctica’s frigid environment could have significant geothermic activity. "I thought it was crazy," admitted NASA scientist Hélène Seroussi. "I didn't see how we could have that amount of heat and still have ice on top of it."

When they studied the freezing and melting cycles on the continent, however, they discovered significant melt activity underneath the ice, which helps create a network of rivers and lakes on the surface of the bedrock. They found that the flux of energy from the mantle plume to be less than 150 milliwatts per square meter. Regions with no volcanic activity measure a heat flux of 40 to 60 milliwatts, while Yellowstone National Park measures about 200 milliwatts per square meter averaged over the entire park.

Most of Antarctica’s known volcanoes have been inactive for millions of years, but the underground plume, called the Marie Byrd Land Plume, as well as geothermic activity along the continental rift, mean that could change. Mount Erebus, the best-known volcano on the continent, has been active for 1.3 million years.

Climate change could spur more activity, as the ice burden on the surface melts. Studies in Iceland have found that as surface ice diminishes, eruptions become more common. The easing of pressure from above increases the likelihood that gases trapped in the magma can get released, spurring eruptions. This, in turn, would melt more ice and continue the cycle.

“The most volcanism that is going in the world at present is in regions that have only recently lost their glacier covering – after the end of the last ice age. These places include Iceland and Alaska,” says Bingham. “Theory suggests that this is occurring because, without ice sheets on top of them, there is a release of pressure on the regions’ volcanoes and they become more active.”

All this means that we may be set to learn more about the fire that is trapped underneath the ice — for now.