At Emmys Ceremony, Hollywood Hits Back At Donald Trump

The president was a frequent target from the Emmys stage last night. 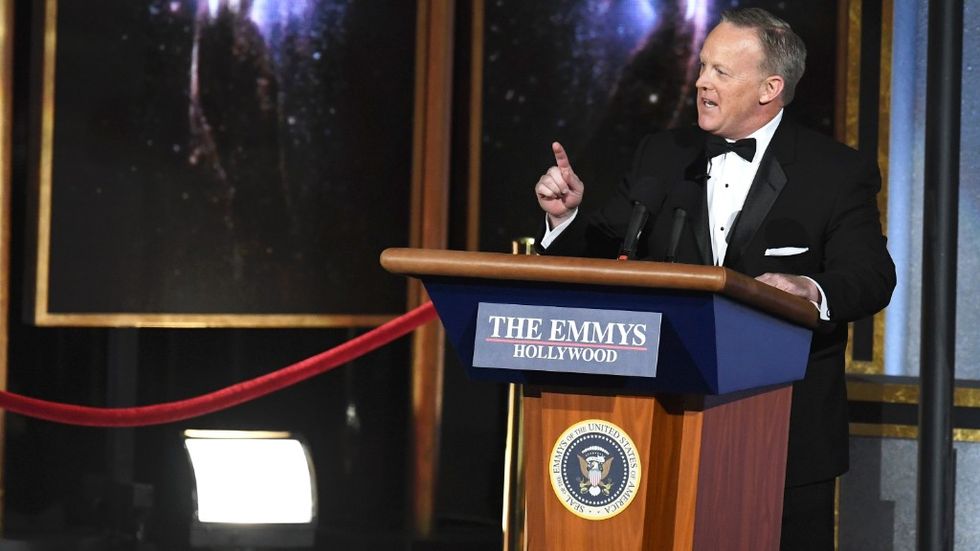 President Donald Trump loomed large at last night's Primetime Emmy Awards, the target of more than one brutal joke, including a rather boisterous monologue by host Stephen Colbert.

“The Americans has hotter spies than the Russia inquiry,” Colbert sang during his opening musical number alongside Emmy-nominated performers Keri Russell and Matthew Rhys. "Even treason's better on TV."

It didn't take long for Colbert to acknowledge Trump's influence over the event: "But if we’re honest with ourselves, and as artists, I think we have to be honest with ourselves. We know that the biggest TV star of the last year is Donald Trump. Yeah. No, you may not like it but he’s the biggest star. You know, and Alec Baldwin, obviously, you know." (Baldwin himself took the stage to accept his award for his portrayal of Trump on Saturday Night Live, quipping, "at long last, Mr. President, here is your Emmy." Trump received Emmy multiple times for The Apprentice but never won, even fuming publicly about his loss.)

Perhaps the most contentious moment during Colbert's opening monologue came when Sean Spicer, the former White House Press Secretary, made a surprise appearance to comment on crowd size. "This will be the largest audience to witness an Emmys, period. Both in person and around the world," Spicer said.

Spicer's appearance sparked gasps, laughter, and criticism. Tim Teeman, a Senior Editor for The Daily Beast, highlighted a reaction from Melissa McCarthy, who was awarded for portraying Spicer on Saturday Night Live during last week's Creative Arts Awards for the 2017 Emmys.

Nor was Teeman the only one who took to social media to share his disapproval.

When U.S. history records the crimes of this administration—and the names of its enablers—Sean Spicer on the Emmys will be a VERY bad look.
— Seth Abramson (@Seth Abramson) 1505709851.0

Former Trump staffers making light of the administration only after they’ve left the White House and their jobs are no longer at risk does not absolve them of their complicity in the international dumpster fire they were more than happy to pour gasoline over while they were still getting a paycheck.

Sean Spicer openly lied to the American public, participated in the stonewalling of the free press, and then shrugged his shoulders and copped “the boss made me do it” as his defense. It’s not noble to skewer that boss now that he’s free from shouldering those burdens and the shame of being so spineless. It reveals someone who has even less character than we originally thought, once again proving that when it comes to the members of this administration, there’s no such thing as setting the bar too low.

But the night didn't always straddle controversy so brazenly.

The team behind political satire Veep, a two-time Emmy-winning comedy series about the first female President of the United States, also jabbed Trump while addressing the crowd.

In our show, when Selina [Meyer] does something horrible or lies, she gets caught and actually pays a price for it,” said David Mandel, the show's executive producer, alluding to President Trump.

Julia Louis-Dreyfus, who made Emmy history when she took home her sixth consecutive win for Best Actress in a Comedy Series for her role on the show, also chimed in. “God, I hope so; let’s hope this is the beginning of something even better in our country -- and in the world -- because I think the world would be a better place if more women were in charge."

While accepting her acting trophy, Louis-Dreyfus noted that the show took a significant change of direction last season: “We did have a whole storyline about an impeachment, but we abandoned it because we were worried that someone else might get to it first,” she said.

Reuniting for the first time since they starred in 1980's 9 to 5, Dolly Parton, Jane Fonda and Lily Tomlin presented together.

Donald Glover, also took shots at the president while accepting his award for Best Actor in a Comedy. “I want to thank Trump for making black people number one on the most oppressed list,” he said, a nod to increased racial hostilities sparked by the Trump administration's domestic policy. “He’s the reason I’m probably up here.”