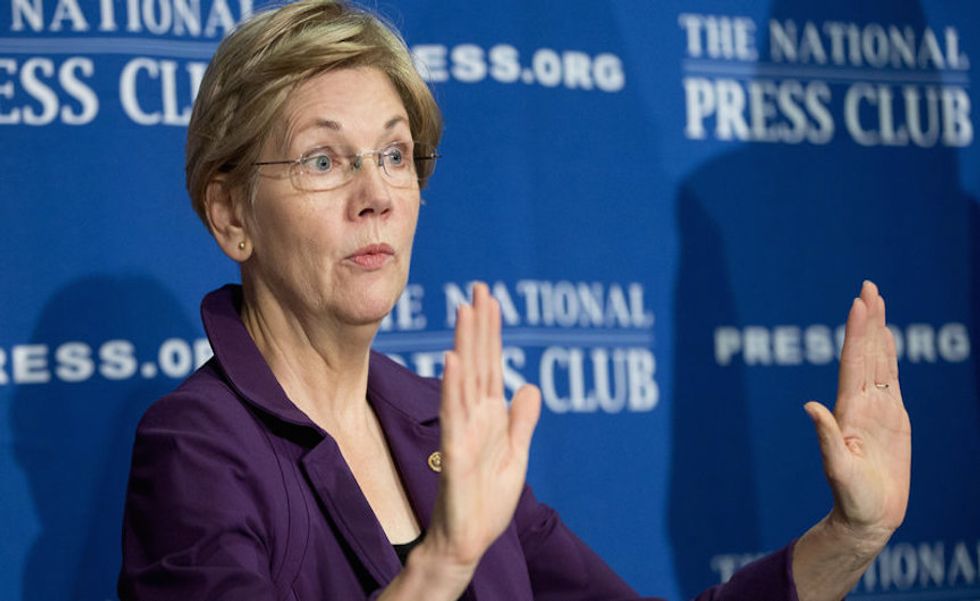 Senator Elizabeth Warren, a Democrat from Massachusetts, has never shrunk from conflict, whether she’s speaking with assertion and conviction to her constituency and her colleagues, criticizing controversial policies or actions, or even publicly calling out other Democrats for not representing what she believes are the people’s best interests.

While in the past she has taken Republican senators to task over Planned Parenthood and abortion access, she has recently leveled her gaze on economic issues. At the National Press Club on November 18, she rolled out a stack of new plans. Items on her agenda include

The full plan, summarized here, is an ambitious wish list, and likely to provoke her opponents. Warren is requesting that U.S. businesses agree to take smaller cuts and pay more to employees through wage raises and other compensations. Republicans will argue that these ideas will stymie the economy rather than stimulate it.  In fact, the GOP went so far as to air

Many political speculators wonder if this move is in part a plan to accelerate Warren as a Vice Presidential player for either Clinton or Sanders in the 2016 Presidential election. In November, when asked directly about a Clinton/Warren ticket, Warren politely deflected the question and was quick to move on. However, if she is vying to be on a Sanders/Warren ticket--the two of them certainly have a similar set of economic goals--she has not let on as of yet.

Warren has also criticized the President and his administration for its lack of transparency regarding the Trans-Pacific Partnership (TPP) trade deal. Concerned that the TPP will make it too easy for American corporations to outsource jobs and exploit tax loopholes, Warren took to her blog to protest the secrecy cloaking the trade deal. The TPP has not been released to the public for review, and parties who read it must agree to a non-disclosure policy (violators will be punished with jail time). Critics of the TPP are in a challenging position, as they cannot comment on the TPP’s terms without disclosing them, yet the President insists that he is only interested in specific criticisms. Warren then did the best she could, warning Americans that the deal too heavily favors corporations and big business while leaving American workers in the lurch.

According to her new economic proposals, it's obvious that she is determined not to let American jobs and workers rights deteriorate further. What is less obvious is why she is really kicking her efforts and publicity, already a strong force, into high gear. Has she simply found her champion issue, or is this part of a longer game, and where is the finish line? Is it too soon to speculate on a Warren for President campaign in 2020?