Two studies suggest a correlation between living with dogs and reduced inflammatory conditions in children. 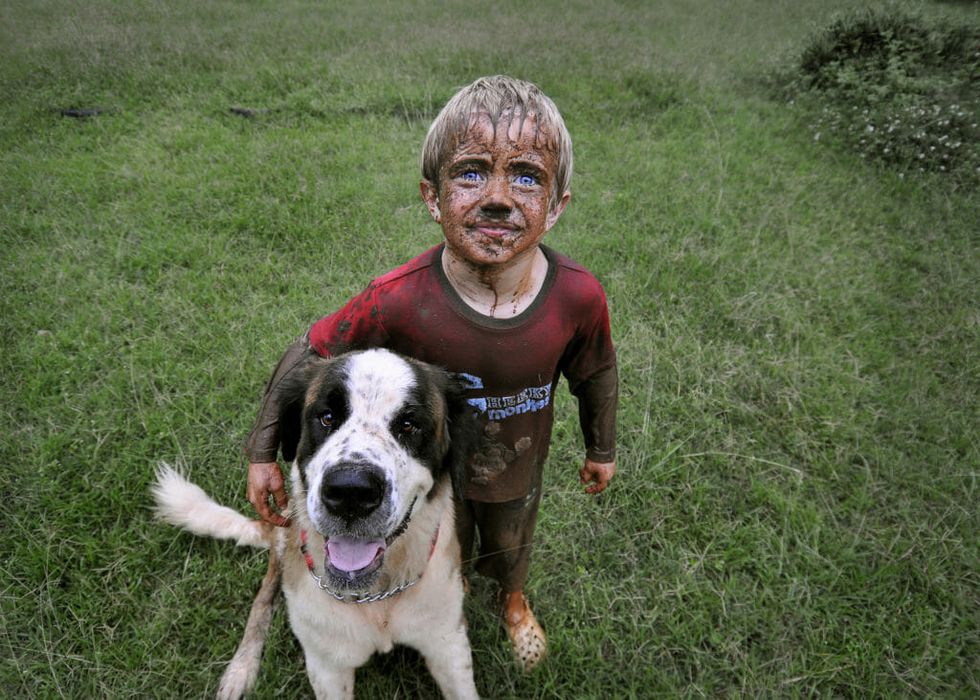 A boy and his St. Bernard happy being messy, dirty and muddy. (Getty Images)

Parents: worried about getting a dog because of all those hair-covered couches and piles of dirt? Relax. It turns out dogs’ dander and bacteria might actually be good for kids.

Two studies presented at the annual American College of Allergy, Asthma and Immunology (ACAAI) meeting in late October found a positive relationship between keeping dogs in the home and reduced rates of eczema and asthma in young children.

The first study found that babies born in homes where one or more dogs were kept indoors for at least an hour every day seemed to receive protection from allergic eczema.

“We found a mother’s exposure to dogs before the birth of a child is significantly associated with lower risk of eczema by age 2 years,” said study co-author Dr. Edward M. Zoratti in an ACAAI release — likely due to the mother’s antibodies passed on in the womb.

The protective effect also seems to decrease with an increase in the child’s age, so families getting a dog when their kids are, say, 10 years old will reap fewer benefits than families who have one from the beginning.

The second study looked at the effect of dog exposure on children with asthma in Baltimore, Md. — asthma is more commonly found in children living in urban settings — and found that the allergens and bacteria found on dogs may have a protective effect against asthma symptoms. However, the effect did not hold true for children who were already allergic to dogs.

“Among urban children with asthma who were allergic to dogs, spending time with a dog might be associated with two different effects,” said Dr. Po-Yang Tsou, lead author of the study. “There seems to be a protective effect on asthma of non-allergen dog-associated exposures, and a harmful effect of allergen exposure.”

The relationship between immunity and animals is not new. Rates of asthma and eczema have been increasing exponentially in industrialized nations over the past three decades, inspiring in the late 1980s a theory known as the hygiene hypothesis.

As the thinking goes, lack of early exposure to pathogens, bacteria and parasites — common during our past days on farms, and today in third world countries — can lead to an underdeveloped immune system. In other words, babies who crawl around on clean, sterile, dog-hair-free floors and eat a packaged, processed diet are failing to develop the complex biome of microbes that used to protect against chronic inflammatory diseases.

Adding to the evidence is the fact asthma and eczema rates are significantly lower in developing nations, where children’s contact with animals, parasites and bacteria is unavoidable.

Recent studies, however, are taking a harder look at the hygiene hypothesis, especially when it comes to asthma. Rates are increasing in both the developing world and urban environments, leading some scientists to wonder if lifestyle factors like lack of exercise and obesity, rather than microbiome, could be responsible.

“Different bacteria and fungi affect different diseases differently, and affect different children differently,” Dr. Jack Gilbert, director of the Microbiome Center and a professor of surgery at the University of Chicago, toldThe New York Times. “We don’t understand the interactions between the immune system, the genome, and all the other components of the body as well as we could.”