At the time, Dior and Depp received backlash over hinting at a connection between Native Americans and a product called sauvage. The line itself has been part of Dior Parfum since 1966 without any Native American connection.

Sauvage, like savage in English, is used throughout French accounts of interactions with Indigenous people in North America during the settler colonial period in the USA and Canada. The Declaration of Independence even includes a passage referring to Natives as "merciless Indian savages."

Like many derogatory terms from the colonial era, savage is now recognized as a racial slur and not used to refer to Indigenous peoples.

Dior eventually took most of these earlier ads, including these from 2018, down from their official pages... 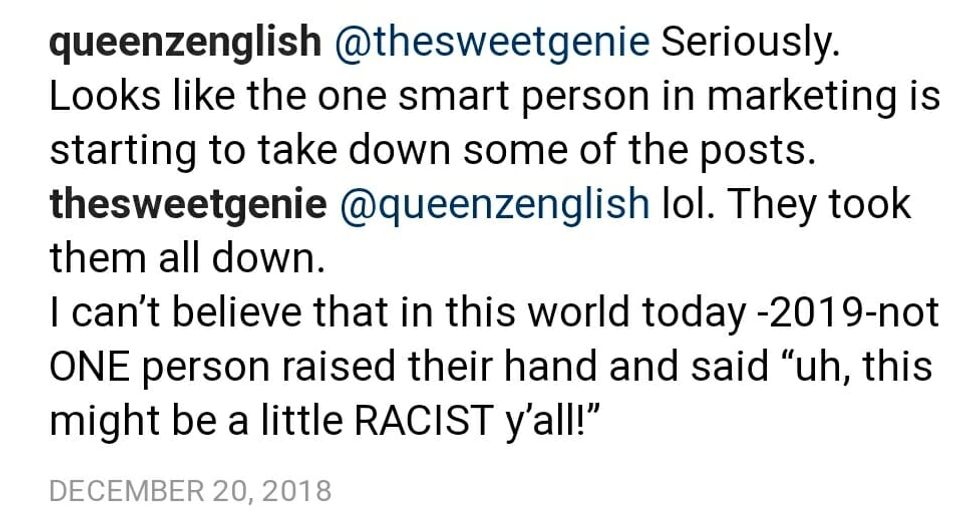 ...and people considered the matter resolved.

But neither Dior nor Depp got the message from Native activists, organizations and individuals because their new latest teaser ads went full Native.

Watch some of the many snippets here hinting at a big event on September 1, 2019.

One issue raised is cultural appropriation.

Depp has no known or named Native ancestors or tribal affiliations beyond his honorary one. Depp was made an honorary member of the Comanche tribe when tribal members were given jobs on his film The Lone Ranger.

LaDonna Harris, founder of Americans for Indian Opportunity (AIO) who "adopted" Depp during The Lone Ranger period, was cited as a consultant on the new Dior Sauvage project.

When a direct connection was made between Sauvage and Natives, the backlash was swift and vehement across social media, however, despite AIO involvement.

IllumiNative Executive Director Crystal Echohawk released the following statement today regarding the @dior “Sauvage” Campaign: “The “Sauvage” campaign released by Dior today is deeply offensive, racist and cultural appropriation at its worst by a corporation that is exploiting Native peoples and culture for profit. Dior’s campaign promised, “An authentic journey deep into the Native American soul in a sacred, founding and secular territory.” Instead, it is an example of how a perhaps “well-intentioned” collaboration can be done in an exploitative and racist manner. The word “sauvage” closely related to the English word “savage,” is a racist slur used to describe Native peoples throughout history and was used as justification for genocide, violence and discrimination against Native peoples, and forced relocation. The video released with the campaign presents a romanticized stereotype of Native Americans coupled with a racist slur to sell their product with no attempt to understand our history and derogatory myths they reinforce. IllumiNative’s research has found that these stereotypes and portrayals fuel bias and racism against Native peoples. While trying to “honor” Native people, Dior has entrenched the same offensive and racist tropes that have been used by those in power to exploit Native peoples and to relegate them to the past. Dior must pull this entire campaign immediately as it does nothing but advance racism and harmful stereotypes against Native peoples.” To learn how you can change the National narrative about Native peoples, visit http://bit.ly/2xAraEV #NotYourSavage #DiorSauvage

Meanwhile, Dior had tipis on display with their logo and "NEW SAUVAGE" at the Victoria and Albert museum in London.

Even before Dior's festival began, Natives online let Dior know Sauvage was not a word or image they wanted to be associated with.

The Brave, The Warrior, The Savage, The mostly naked over sexualized Indian princess. Again and again and again and again and again. Over and over these images find their way back into advertising for products, places, things. Imagine all of these fancy suits in boardrooms, young and old, not Indigenous...brainstorming creative and coming back to this place. Again. Why is it so difficult to move FORWARD and quit repeating this crap? Stop. Just stop! #dior #diorsauvage #untilthenextone

🧼Dior’s new fragrance. It’s ok if it’s in French, right? Wait - no it’s not- that’s right. @dior s new ‘Sauvage’ fragrance campaign is so fucking problematic! 1. They’ve released a “native” inspired fragrance called Sauvage. That’s cool, right, cuz it’s in French. WRONG. This is their idiotic campaign: “Unleash your inner savage and be the alpha of the pack with Sauvage by Dior. This remix of the 1996 Eau Sauvage is a modern take of the original’s fresh, ferocious fragrance. Inspired by the fierce plains and wild open spaces of feral lands, Sauvage would unleash your unruly side with its primal and breezy scent.” . 2. Savage IS a term used to dehumanize indigenous people. We don’t use that word - we ain’t reclaiming it, and it sure as hell is not ok to use Indigenous people in you racist campaign for YOUR PROFIT. @dior - you disgust me. . 3. Their idiotic tag line. “We are the land. Dior” NO YOURE NOT 🤣🤣🤣🤣 4. 📈Carbon Footprint: Christian Dior performs very poorly among its competitors for its carbon footprint. A company’s performance in this category is based on its success in implementing energy efficiency measures. Investments in energy efficient technology, green building and sourcing of renewable energy can all lead to cost savings and reduce the company’s contribution to climate change. 5. 📈Pollution Prevention: Christian Dior performs poorly on this issue. Companies are evaluated on pollution prevention by the levels of waste (including hazardous waste) they produce and release into the environment, and can be affected by whether they develop products that can reduce exposure to pollution. 6. 📊Forced labor: Dior performs “well” on forced labor- so like not all their clothes are made by slave labor, just some- that’s cool right? NO. 7. 📊Diversity: words? No this emoji will sum it up. 😂😂😂🤣🤣🤣 . . .company analysis based on Censible.co . Fuck outta here @Dior you’re ridiculous! . I made an edit for you @Dior “we are [using up, destroying and profiting off the image of the people of] the land. Dior” - that’s better. #diorsoracist #diorsauvage #canceldior #fuckoffjohnnydepp #diorparfums #dior #inspirednatives #hautecouture #diorcampaign #ootd #fashiondesigner

And the charges of racism and cultural appropriation are not restricted to Instagram or Native Americans.

Scholar and activist Dr. Adrienne Keene of Native Appropriations also weighed in with receipts going back to 2012 on Depp and Dior.

People were a bit confused by the message.

Some tried to defend Depp and Dior, but those fans appeared outnumbered.

By Friday evening, Dior had pulled their posts of the ad from social media as they had in December without explanation or apology. They did offer this statement however:

Whether they have scrapped the ad campaign and the association between Sauvage and Indigenous peoples or simply plan to use it outside of social media to avoid backlash is unclear.

Professor Cutcha Risling Baldy's book We Are Dancing for You: Native Feminisms and the Revitalization of Women's Coming-of-Age Ceremonies  is available here.

The United States, unlike North Korea and other nations President Donald Trump admires, does not have an official state media channel where the federal government can push propaganda.

But since his 2016 campaign, Trump has spoken as though he does have an official state media in Fox News.

Former National Security Advisor John Bolton's allegations in his upcoming memoir have rocked the impeachment trial in the Senate. Bolton claims Trump sought to withhold aid from Ukraine until it acquiesced to performing politically beneficial investigations for Trump's reelection bid.

Demands for Bolton's testimony skyrocketed among the public after allegations in his upcoming memoir that Trump sought to withhold Ukrainian aid as late as September to secure foreign investigations into Trump's political rivals.

Explosive allegations from an upcoming memoir by former National Security Advisor John Bolton are strengthening the case for additional witnesses at the Senate impeachment trial of President Donald Trump.

According to Bolton's manuscript, the President sought as recently as September to withhold $391 million in congressionally approved aid to Ukraine until its President announced investigations into his political rival, former Vice President Joe Biden.

The team went after a familiar target in a performance that was likely for an audience of one: Donald Trump.

Ken Starr, a conservative pundit and frequent Fox News guest, is best known for his dogged attacks to find impeachable offenses by President Bill Clinton during a multi-year investigation into every aspect of the Clinton family's lives.

In the end, Starr found an extramarital affair which was used to impeach Clinton and that Clinton lied under oath about his personal life.