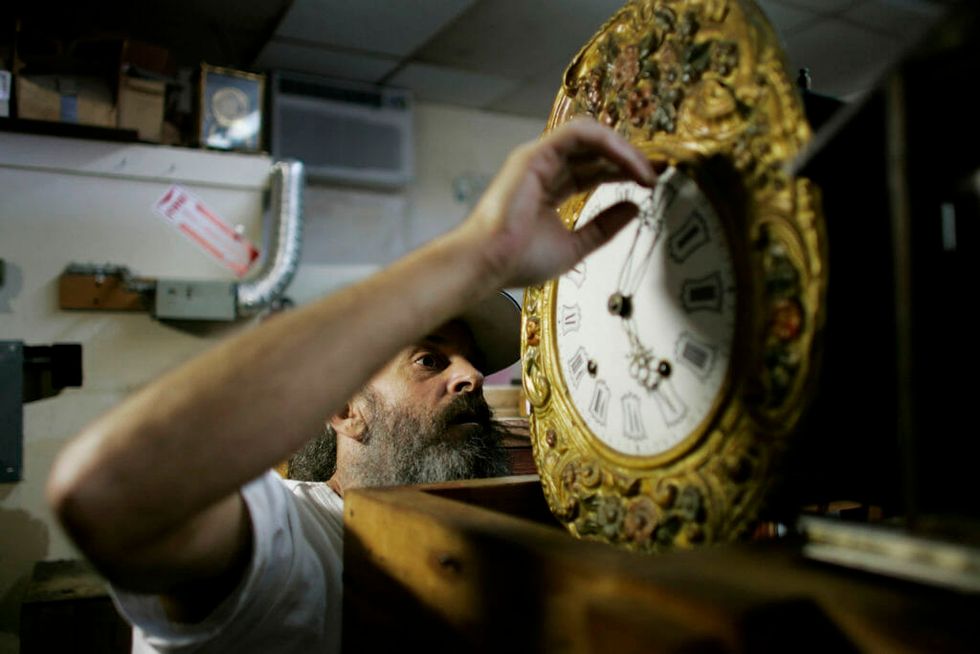 Mark Brown repairs a clock at Brown?s Old Time Clock Shop March 6, 2007 in Plantation, Florida. This year day light savings time happens three weeks early and some people fear that it could cause some computer and gadget glitches. (Photo by Joe Raedle/Getty Images)

On Sunday, March 11, 2018, roughly 327 million Americans will reluctantly participate in an age-old tradition of time travel. Daylight Saving Time 2018 (DST), also known incorrectly as "Daylight Savings Time," will take place at 2 a.m. on Sunday. When the clock strikes, all 327 million of us will "spring forward" to 3 a.m., losing one hour of sleep.

There are a few things to know about Daylight Saving Time. First, not all Americans adjust their clocks. According to History.com, Hawaii, Arizona, and U.S. territories do not observe DST. Europe may in fact end daylight saving. As The Independent reports, Finland called to end the practice last month, along with French MEP Karima Deli. Deli said, "Studies that show an increase in road accidents or sleep trouble during the time change must be taken seriously.”

Our founding father Benjamin Franklin is often credited with implementing Daylight Saving Time. Funny thing is, the story comes from a satirical essay he wrote while in France, after the summer sun woke him up earlier than he expected. According to History.com, a cranky Ben Franklin proposed to the Parisians that waking up at dawn would save them money on candles.

Let us remember we are talking about the difference of a single hour. Clearly, we all take our sleep very seriously. On Monday morning, we will search the depths of the Internet for memes to help us unleash our angst over the historic tradition. Which is probably why you're here. Here are a few funny memes to get you through Daylight Saving Time 2018.

Thank you Oprah, but I'll take a car.

I've got gadgets and gizmos a-plenty. Bags under my eyes galore.

For the Parents (Sorry, Mom)

No clocks, no rules.

Just give me an hour to figure it out.