Did The Russians Use A Sonic Device To Spy On U.S. Diplomats In Cuba? 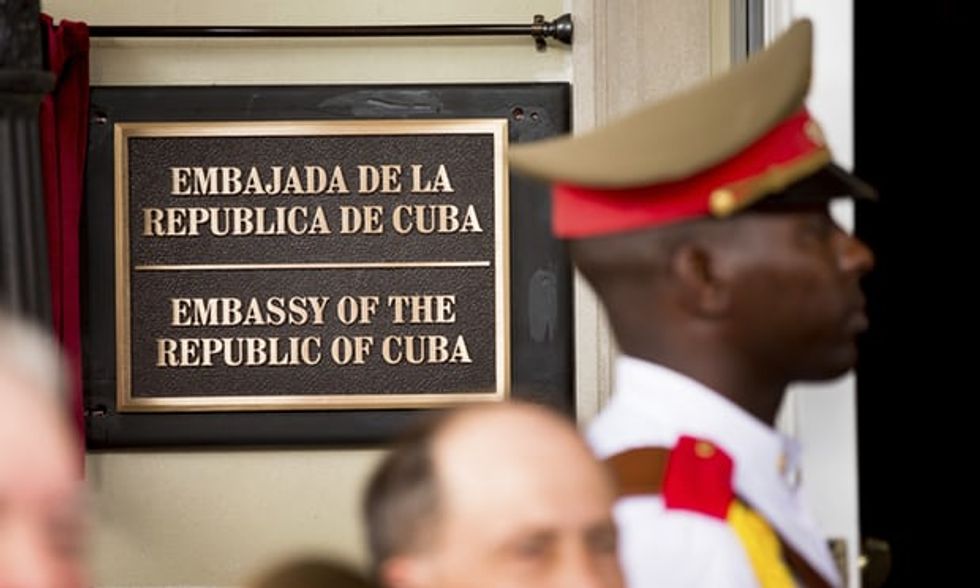 The State Department is conducting a tight-lipped investigation into unusual symptoms suffered by United States diplomats and their families stationed in Havana, Cuba. Beginning in late 2016, members of the U.S. embassy community began to suffer from various symptoms, which worsened until some patients were removed to the U.S. for medical treatment. Off the record, U.S. officials have reported and experts theorize about a sonic device that caused the symptoms. Meanwhile, the official investigation continues—to determine both the purpose of the device and who was responsible.

According to an anonymous source for the New York Times, the American diplomats’ symptoms included headaches, dizziness and hearing loss. The affected employees, who were not at the same place at the same time, suffered from what seemed like concussions. As a result of this incident, the U.S. flew a minimum of six people to the University of Miami’s hospital in 2017 for diagnosis and treatment of their unusual illness. One of the people examined at the university hospital purportedly had a blood disorder. According to one U.S. official, at least some suffered permanent hearing loss.

CBS News reports that, according to their review of medical records, some patients who were treated at the Havana Embassy were diagnosed with mild traumatic brain injury and potential damage to their central nervous systems.

While the State Department would not confirm these details, on August 24, 2017, spokesperson Heather Nauert did state at a press briefing that more than 16 Americans from the embassy community were treated for a variety of symptoms. On September 1, that number was updated by Nauert to 19, including one diplomat diagnosed with unnamed symptoms as recently as August 2017.

“We would never give information about the the health status of one of the Americans,” Nauert said. State department officials are reluctant to release information about specific symptoms because they are still investigating which were caused by the events in Cuba.

The American Foreign Service, which serves as the diplomats’ union, released a detailed list of the symptoms suffered by their members. They ranged from permanent hearing loss, mild traumatic brain injury, loss of balance, brain swelling, severe headaches, and "cognitive disruption."

Unnamed U.S. officials told CNN that the ongoing investigation indicates the symptoms were the result of a sonic wave machine located in or near diplomatic housing. But, as of August 24, Nauert said no device has yet been found.

"We can't rule out new cases as medical professionals continue to evaluate members of the embassy community," Nauert said.

She confirmed the investigation is ongoing and continues to be revised as they obtain new information.

How A Sonic Device Could Cause These Symptoms

During the course of the investigation, the U.S. government concluded the symptoms must be attributed to a device that emitted sounds outside the human hearing range, anonymous U.S. officials told Time.

The most popular and viable scientific theory about how an audio device could cause the type of symptoms experienced by the diplomats in Cuba without detection by the diplomats is through infrasound. Frequencies at or below the range of a human’s ability to hear are known as low-frequency sound, or infrasound, and are used by whales to communicate long-distance. Some thunderstorms, machinery and other mechanisms also emit these types of frequencies.

Charles Liberman, a hearing loss researcher from Harvard Medical School and Massachusetts Eye and Ear in Boston, agrees that infrasound is a viable possibility. He explains that to induce hearing loss with sound, you would need to overload the mechanical portion of the ear that senses audible noise.

"You overstimulate the part of the ear that's mechanically tuned to those frequencies and it falls apart," Liberman said.

What’s more, Liberman indicated, there’s growing evidence that infrasound—given off by windmills and wind generators when the blades beat—is causing headaches, dizziness and nausea to people who live and work close to the machines .

In a 2014 study, researchers from the Ludwig-Maximilians University in Munichdemonstratedthat low-frequency sounds, beyond human’s capacity to hear, could disrupt tiny whistles produced by the ear, in response to noise. Liberman posits that if the infrasound stimulated the part of the ear not dedicated to hearing – for example, the system that controls balance – the symptoms wouldn't appear right away.

"You could imagine them being very slow onset and very persistent," Liberman said. "It might take days before you even notice any funny sensations."

Research also indicates infrasound can create symptoms beyond those controlled by the ear.

According to an NIH survey, low frequency sound could cause other symptoms such as "intolerable sensations," incapacitation, disorientation, vomiting, bowel spasms and "resonances in inner organs, such as the heart."

Dr. Hung Jeffrey Kim, neurotologist at Georgetown University Hospital explained thatlow frequency sound can travel deep into your brain, where it can cause nerve injury and even a microhemorrhage. With long-term exposure, this can damage cognitive and memory functions.

Nauert’s August 24th statement did not blame the Cuban government.

“We’re not assigning responsibility at this point,” Nauert said, citing the unknown identity behind these incidents. “The investigation is ongoing.”

Cuba issued a statement in Spanish, which read: "The Ministry emphatically emphasizes that Cuba has never allowed ... Cuban territory to be used for any action against accredited diplomatic officials or their families, without exception."

However, Cuba had a long history of harassing U.S. diplomats, including breaking into their cars and homes, until President Obama restored full diplomatic ties in 2015. Since that time, cries of harassment had stopped until this recent incident.

In response, two Cuban diplomats were expelled from their embassy in the United States in May 2017.

"The Cuban government has a responsibility and an obligation under the Geneva convention to protect our diplomats," State Department spokesperson Heather Nauert told reporters, "so that is part of the reason why this is such a major concern of ours."

"We felt like we needed to respond to the Cubans and remind them of their responsibility under the Vienna convention," said one U.S. official. The Cuban officials may be allowed to return to the U.S., depending on the outcome of the investigation.

Nauert said Cuba is cooperating in the investigation process, with the U.S.

U.S. investigators are still trying to determine whether the devices were intended to serve as weapons or some other purpose.

Was Russia Spying on U.S. Diplomats in Cuba?

U.S. officials were investigating whether the sonic devices could have been planted by another country, such as Russia. Unnamed U.S. officials say the investigation has not narrowed down who planted the devices, but Russia is on the list. Suspiciously timed, the first known symptoms arose in late 2016, around the same period the U.S. first began accusing Russia of interference with its election. Thereafter, as U.S. diplomats’ symptoms continued and grew worse, meanwhile President Obama had expelled 35 Russian diplomats and closed two Russian compounds within the U.S.

Additionally, a U.S. government official told CNN the U.S. is trying to determine whether another country is seeking to “drive a wedge between the U.S. and Cuba” because of actions the U.S. has taken in the past. Many U.S. officials assume some elements within the Cuban government must have “facilitated” the use of the sonic devices because of the level of tight security Cuba keeps on its country. Investigators also continue to search for evidence that sonic devices were used against U.S. diplomats outside of the Cuban government’s regular chain of command.

It’s also possible that whoever was behind the devices did not realize the extent of the damage.

One popular theory is that the sonic devices were placed as surveillance to gain intelligence through the diplomats.

In fact, the Russians have a history of using sonic devices for surveillance. In the 1960s, the U.S. government found low-level microwaves planted throughout their Moscow embassy, known as the “Moscow signal.” Eventually, an investigation discovered that this electromagnetic radiation was for the purpose of eavesdropping on conversations within the U.S. embassy.

John Caulfield, former chief of mission at the United States Interests Section in Havana, said, “My speculation is that it was a surveillance effort that went bad.”

Foreign Service Officer James Lewis agrees with the likelihood that signs point to something gone wrong in a surveillance operation. He says sound-based devices are a commonly used for surveillance is common, and that Russia is known to be one nation that employs this tactic.

Lewis explained the fundamental process: "I bounce a signal off your window and it's affected by sound vibrations, typing on a keyboard or your voice." He added, "The signal comes back to me and I can use software to read it -- it will say, 'this disruption is caused by the letter Q.'" In this way, people who are monitoring the communications decode the information.

Lewis said if the equipment were "misconfigured, (it) could produce inaudible noise." He suspects the Cuban intelligence agents had failed to properly install surveillance to monitor American communications, “and it screwed up.”

Former senior adviser at the National Security Council Mark Feierstein indicated that when President Trump failed to tear up the Obama administration’s Cuba policy, this showed that even the Trump administration did not believe that the Cuban government bore responsibility. Following the incident, Mr. Trump reined in some minor Cuban policy guidelines, but most of Mr. Obama’s measures remained in place.

“It just doesn’t strike me as something the Cuban government would do,” Rhodes said. “They’ve been pragmatic about Trump.”

Other Cuban experts also doubt the Cuban government would intentionally risk damaging relations with the U.S.

"I doubt that it would be an intentional effort to derail normalization between people who opposed it," according to William LeoGrande, co-author of Back Channel to Cuba: The Hidden History of Negotiations Between Washington and Havana. "It's more likely that people in the Cuban security forces might have done a favor for friendly intelligence services without having cleared it all the way up the chain of command."

Meanwhile, as U.S. officials complete their investigation, questions remain about how Russians may have used infrasound or other sonic devices to attempt surveillance.