They Are the Children of Immigrants, But They Also Share a Special Honor 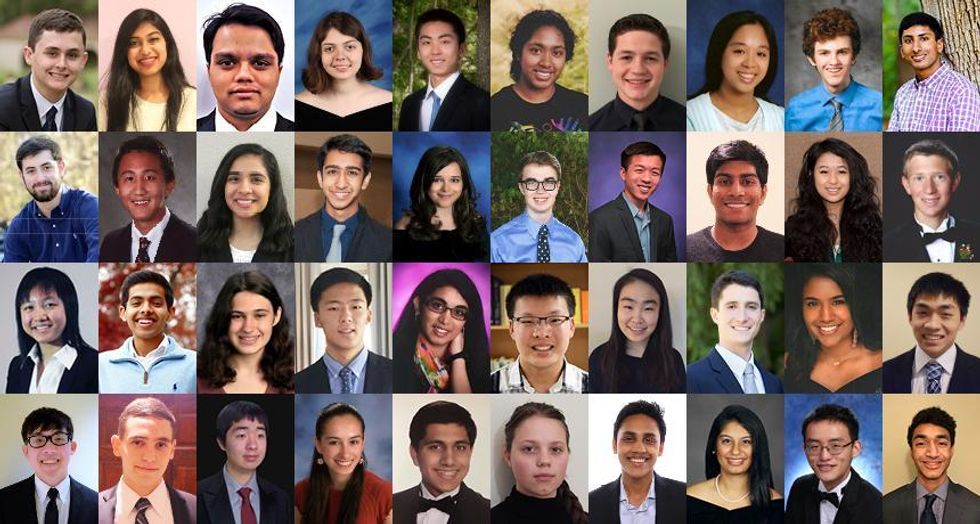 The Trump administration and some members of Congress would like to impose new restrictions on legal immigration, including highly-skilled immigrants. Policymakers seeking to restrict high-skilled immigration should note the contributions made by their children.

Krithika Iyer of Plano, Texas created an electronic teaching device to gauge the emotional state of the learner and adjust its responses to reduce student frustration. Krithika used photos or videos of people exhibiting emotions, and developed a set of computer algorithms to infer emotional states from their facial expressions. She is 18, a senior at Plano East High School and one of 40 finalists in the 2017 Regeneron Science Talent Search.

Another finalist in the Regeneron Science Talent Search, Beau Taylor Bingham, 17, of Tulsa, Oklahoma motivated by a family friend’s life and death struggle with the “super-bug” methicillin-resistant Staphylococcus aureus (MRSA), evaluated algal extracts for their potential to treat antibiotic-resistant bacteria for his medicine and health project.

David Boris Rekhtman, 18, of Bethesda, Maryland used high heat to destroy cancer cells, and near-infrared photo-immunotherapy, which uses a compound to kill cancer cells under infrared light. He tested a way to stimulate the production of immune system cells that may target remote tumors found in metastatic cancer.

Another winner, Jonathan H. Chung is a 17-year old senior at Hendrick Hudson High School in New York. He identified two intestinal metabolites that increase expression of the dopamine transporter for his cellular and molecular biology project. Dopamine is a neurotransmitter and abnormal levels are observed in many mental conditions.

The 2017 Regeneron Science Talent Search, the United States’ oldest and most prestigious science and math competition for high school seniors, named 40 top scholars in March. Scientists selected the finalists based on the scientific rigor and world-changing potential of their research projects. Formerly known as the Intel Science Talent Search, a program of Society for Science & the Public, the annual competition has been dubbed the Junior Nobel Prize with many of the students going on to graduate school and working in the sciences.

The 40 finalists have been awarded an all-expense paid trip to Washington, D.C., to attend the Regeneron Science Talent Institute, where they will compete for $1.8 million in awards. The 15 young women and 25 young men come from 34 schools in 17 states. Finalists were selected from more than 1,700 entrants representing 527 high schools.

Thirty-three or 83 percent of those finalists are the children of immigrants.

Legal residents of the United States who were born in India or China represent less than one percent of the general population. The percentage of people living in America who were born outside the country reached 13.7% in 2015 and is projected to hit a record 14.9% in 2025. The country's previous high of 14.8% was set in 1890, when waves of Irish, Italian, Polish and other immigrants were coming to the USA.

Three of the finalists, or 7.5 percent, had parents who came to America as family-sponsored immigrants.

Thirty or 75 percent of the finalists are the children of foreign workers in the United States on an H-1B visa, even though H-1B visa holders make up only one percent of the U.S. population. The H-1B is a non-immigrant visa which allows U.S. employers to temporarily employ foreign workers in specialty occupations. U.S. Citizenship and Immigration Services recently announced it would take a more targeted approach on H-1B visas by visiting the workplaces of H-1B petitioners more frequently. The Justice Department issued a press release cautioning employers petitioning for H-1B visas to not discriminate against American workers. Both announcements are potentially crippling to outsourcing companies and evidence that the Trump administration is implementing pieces of a draft executive order that calls for a review of, and possible change to, a number of work visas including the H-1B.

Twenty-seven or 68 percent had a parent who came to America as an international student. Without maintaining or increasing the ability of international students to remain here after graduation, this country will lose not only these highly skilled and U.S. educated workers but the potentially substantial contributions of their children. If an immigration ban similar to President Trumps initial travel and immigration ban is enacted colleges stand to lose $700 Million a Year.  International students and professors at U.S. universities could be denied entry into the United States and seek positions in other countries.