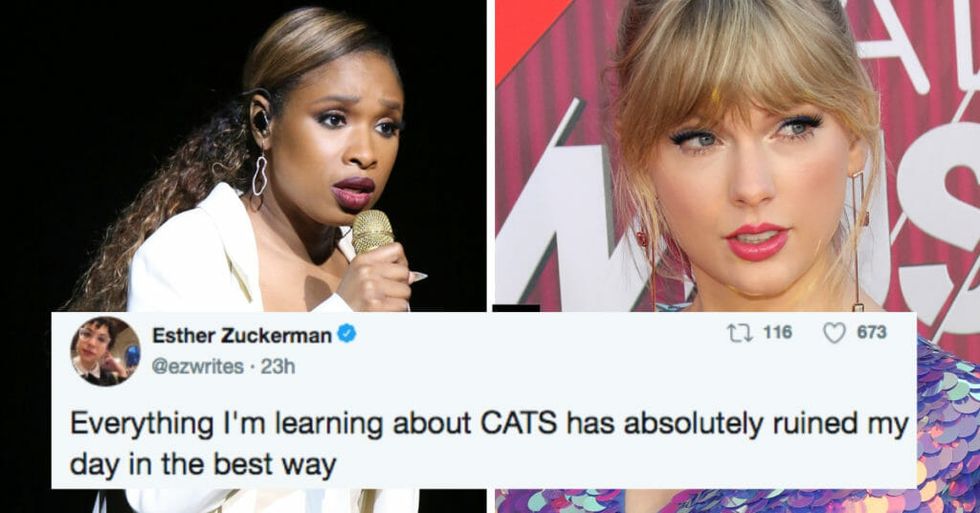 So let's just get right to the point: The upcoming Cats movie is going to be absolutely batshi* bonkers crazypants wackadoodly-doo insane. That's it. That could be the whole article.

But the details are too good not to obsess over, so here we go!

So okay: This week in Vegas, CinemaCon took place, which is the annual convention for movie theater owners where movie studios present their upcoming rosters. Universal presented Cats, and while it didn't present any actual footage, it presented plenty of details that are just full-tilt batshi* crazy.

To set the stage, let's remember that the cast includes A-listers like Idris Elba and Taylor Swift, divas like Jennifer Hudson, and full-on legends Ian McKellen and Judi Dench. So this is a legit film, not some rinky-dink Mamma Mia kind of popcorn musical.

So how is Universal and Tom Hooper doing this? Dame Judi in cat makeup? Ohhh no. Hooper is using CGI motion capture to turn Dame Judi into a digital cat.

Then, he is shooting the entire film on GIANT sets with GIANT set pieces so that Dame Judi will be the size of an actual cat and what is going on?!?!

Plus, the whole thing will be shot from the perspective of an actual cat.

I promised Cats and we got Cats! A behind the scenes reel as there’s no finished footage. We did learn it’s largel… https://t.co/gCSzydAy3R
— Germain Lussier (@Germain Lussier) 1554317741.0

Dame Judi Dench is going to be crawling around like a computer version of your mom's cat Whiskers. As James Corden, who also stars in the film, helpfully described it:

“These are people, but they’re cats, and it’s kind of blowing my mind.”

That sentence means nothing and makes no sense and what is this movie and we LITERALLY CANNOT WAIT.

Moving on! How is Hooper going to make sure Dame Judi really looks like a cat? Why, "digital fur technology," of course.

What the ever-loving hell is digital fur technology? Who knows, but according to Hooper, it "create[s] the most perfect covering of fur.” Sure okay!

Also? Everyone took this all VERY seriously. As Vanity Fair reported, in the video that Universal presented, Dench said:

“We spent a very very long time preparing how to be a cat.”

And Idris Elba added that the linchpin to his performance was figuring out how to view the world from “the cat perspective.”

ARE TICKETS AVAILABLE FOR PURCHASE YET?

No trailer for CATS, but a behind-the-scenes clip -- including Idris Elba talking about looking at the world throug… https://t.co/mGBiSF8dWh
— Barry Hertz (@Barry Hertz) 1554317640.0

Naturally, people of the internet are losing their entire minds:

Behind the scenes footage of CATS reveals all the sets are gigantic, filled with oversized furniture and doorways a… https://t.co/EIT95WpZEi
— Salem's Thot™ (@Salem's Thot™) 1554317584.0

Now if you'll excuse me, I have to go call everyone I have ever known and tell them everything about this movie. Bye!