Carrie Fisher Was More Than A Galactic Hero To Many Sufferers 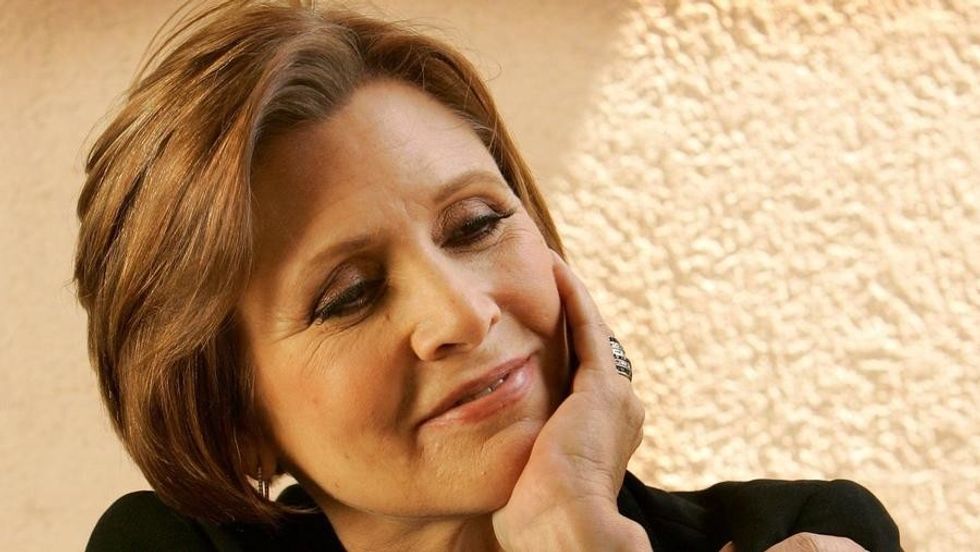 Carrie Fisher's hilariously tragic autobiographical novel, Postcards from the Edge, opens with the showstopper of a line, “Maybe I shouldn’t have given the guy who pumped my stomach my phone number but who cares? My life is over anyway.” The book lifted a suffocating veil from Fisher's life, and from the lives of countless others who, in reading her words, learned that living with mental illness is nothing to be ashamed of. Later, she would speak about her struggles with bipolar disorder with similar candor.

"I shot through my twenties like a luminous thread through a dark needle, blazing toward my destination: Nowhere," she wrote. For a time, it may have seemed that way. The daughter of crooner Eddie Fisher and movie star Debbie Reynolds, who divorced when she was two, Fisher grew up in the spotlight. But when Star Wars catapulted her to stardom––and iconic status––at the age of nineteen, she self-medicated with alcohol and cocaine. That her addictions stemmed from an oft-misunderstood mental illness (the cause of violent mood swings and often frantic thoughts) was a cause to which she would dedicate much of her life. ”I have a chemical imbalance that, in its most extreme state, will lead me to a mental hospital...," she told Diane Sawyer. "I am mentally ill, I can say that. I am not ashamed of that. I survived that, I’m still surviving it, but bring it on.”

When asked to describe her life before her diagnosis, Fisher said she was a "very drug-interested" person and that "if you’re doing drugs or alcohol in an abusive way, you’re going to seem bipolar." The diagnosis came after she'd been sober one year. "I was not going to go. I got sober and then I came in with a bunch of people so we all hung out," she recalled. They calmed down, and I went in the other direction. When I got sober, I thought, “Well, that’s it. I’m an alcoholic or an addict, so that’s what’s wrong with me. I don’t need therapy.” A year later, when I was going to have to turn myself into the brain police, I was not happy."

Fisher's unflinching honesty left some interviewers wondering whether she'd accepted her status as a "poster child" for the disorder. Her response was quintessential Fisher: "Well, I am hoping to get the centerfold in Psychology Today," she once told WebMD. "It's a combination of everything. It was out there, anyway; I wanted my version of it out there. Now, it seems every show I watch there's always someone bipolar in it! It's going through the vernacular like "May the force be with you" did. But I define it, rather than it defining me."

That Princess Leia herself would rise from the trappings of a sex symbol and launch a successful career as an author, screenwriter, script doctor, humorist and mental health advocate gave Fisher's efforts all the push they needed. In an op-ed for TIME, Anna David, the author of the addiction memoir Party Girl, explains why Fisher's celebrity served as a powerful weapon: "Because here’s the thing: one of the most shocking aspects of recovery is the realization that sober alcoholics and addicts are oftentimes hilarious about some of the darkest things imaginable. A 12-step meeting can be far more entertaining than a comedy club. It’s something that those outside of recovery can’t really understand — “What do you mean, you sit in church basements talking about your darkest moments and laugh?” But Fisher was the first to try to let so-called regular folks peak [sic] behind the sober addict’s comedy curtain."

Natasha Tracy, a mental health blogger and author of Lost Marbles: Insights into My Life with Depression and Bipolar, expressed similar sentiments: "Carrie Fisher coming out and saying she had bipolar disorder was almost like a bright light for people, showing them that they could achieve their goals even with a mental illness like bipolar disorder," Tracy says. "There’s a feeling that all you are is the disorder. You can feel like a freak, like you’re the craziest person in the whole world and then someone comes out and dramatically talks about having bipolar disorder. You can start seeing your own experiences echoed in someone you really identify with.”

The inimitable Fisher continued her advocacy until the day she suffered a heart attack last week on a plane bound for Los Angeles. In her final advice column for The Guardian, she reached out to Alex, a fan who wrote seeking advice on how to cope with the disorder. Even after decades in the public eye, Fisher never seemed to be at a loss for words. "You’re lucky to have been diagnosed as bipolar and accepted that diagnosis at such a young age. I was told that I was bipolar when I was 24 but was unable to accept that diagnosis until I was 28 when I overdosed and finally got sober. Only then was I able to see nothing else could explain away my behavior..."

"We have been given a challenging illness, and there is no other option than to meet those challenges," she continued. "Think of it as an opportunity to be heroic––not “I survived living in Mosul during an attack” heroic, but an emotional survival. An opportunity to be a good example to others who might share our disorder. That’s why it’s important to find a community––however small––of other bipolar people to share experiences and find comfort in the similarities... You don’t have to like doing a lot of what you do, you just have to do it. You can let it all fall down and feel defeated and hopeless and that you’re done. But you reached out to me – that took courage. Now build on that. Move through those feelings and meet me on the other side. As your bipolar sister, I’ll be watching. Now get out there and show me and you what you can do."