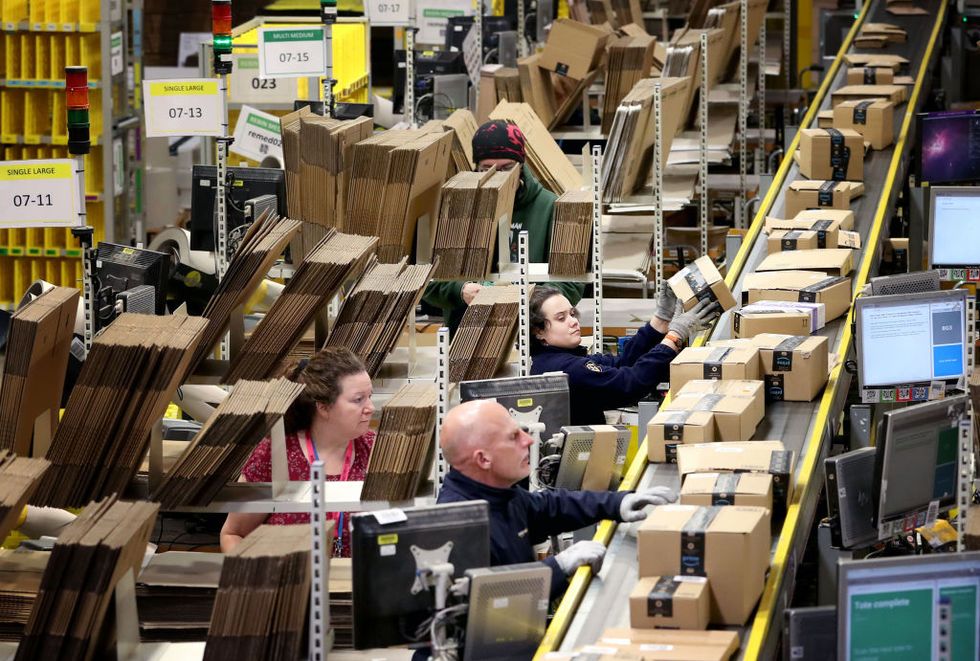 Staff label and package items in the on-site dispatch hall inside one of Britain's largest Amazon warehouses in Dunfermline, Fife, as the online shopping giant gears up for the Christmas rush and the forthcoming Black Friday sales. (Jane Barlow/PA Images via Getty Images)

American retail is dying. Malls are decaying, empty big box stores are creating eyesores for communities, and more than 8,000 stores closed in 2017, the most since 2009. But not all retail is dying; Amazon is doing just fine. In fact, this past Cyber Monday was Amazon's biggest shopping day ever. But someone had to pack all those boxes, and the reality is, it’s whoever Amazon can pay the least. That means: the elderly and vulnerable.

Amazon needs thousands of temporary employees to manage its seasonal business boom, and many of those employees come from a program known as CamperForce, which recruits retirees as temporary workers. This seasonal jobs program draws on a pool of retired people who live in their RVs. The program offers employment for 3-4 months doing the picking, packing, storing, and receiving in warehouses, plus a campsite so employees can easily arrive for their next shift.

The average Workamper, who is in their 60s, 70s or 80s, walks as many as 15 miles a day moving boxes around a windowless, million-square-foot warehouse filled with heavy machinery. They earn around $11.50 an hour with no benefits, although in some locations the final wage turns out to be much less. In the UK, workers have to pay for a “bus benefit” that renders their pay below minimum wage.

Getting seniors to spend their golden years doing physically demanding migrant labor — with mandatory overtime and two unpaid 10-minute breaks per 10-hour shift — is a trick of both good marketing and bad finances. Amazon brands its CamperForce with a veneer of fun, calling the traffic jam on the last day of work a “taillight parade” and handing out T-shirts and other merchandise with the CamperForce logo, a silhouette of an RV bearing the Amazon “smile.” Former Workampers promote the experience in paid affiliate blogs and YouTube videos, collecting $125 for every new worker they refer.

But for seniors without a pension or large savings, it may be their only option. After the 2008 economic collapse, seniors who lost their retirement savings or saw their homes go into foreclosure became prime recruits for Amazon. Another prime recruiting stop: Homeless shelters.

While life behind a cash register, interacting with challenging American consumers, is by no means easy under the best of circumstances, Amazon warehouse workers report grueling, dehumanizing, and dangerous conditions, with few worker protections and numerous worker humiliations. Workers routinely experience plantar fasciitis, tendonitis, and repetitive stress injuries, in addition to warehouse accidents.

Last year, Amazon faced fines for workplace safety violations that resulted in the death of employees and more recently, 24 employees at an Amazon warehouse in New Jersey were hospitalized when a robot punctured an aerosol can of bear repellent. In 2014, Amazon petitioned the Supreme Court for the right to not pay their employees for the half-hour per day they spent in security being patted down by guards who make sure they don’t steal anything. Workers also complain that Amazon promises incentives or bonuses but then exploits unknown conditions to avoid paying them.

In 2014, after a fire alarm went off in a Pennsylvania warehouse, Amazon forced workers to stand outside without coats for hours in freezing weather, rather than wait in their cars. Multiple workers needed to be treated for exposure at a local hospital. Managers told them to use each others’ bodies to keep warm and threatened them with termination if they returned to their cars to warm up.

After the New York Times reported on numerous reports of worker mistreatment, humiliation, and even death at Amazon warehouses, Jeff Bezos wrote that he didn’t recognize the company described in the story.

“I strongly believe that anyone working in a company that really is like the one described in the NYT would be crazy to stay. I know I would leave such a company,” said Bezos.

Bezos also happens to be the world’s richest man, whose net worth tops $100 billion dollars. Presumably, his working conditions are different than those of his warehouse workers.

UPDATE: This piece has been updated from its original form.