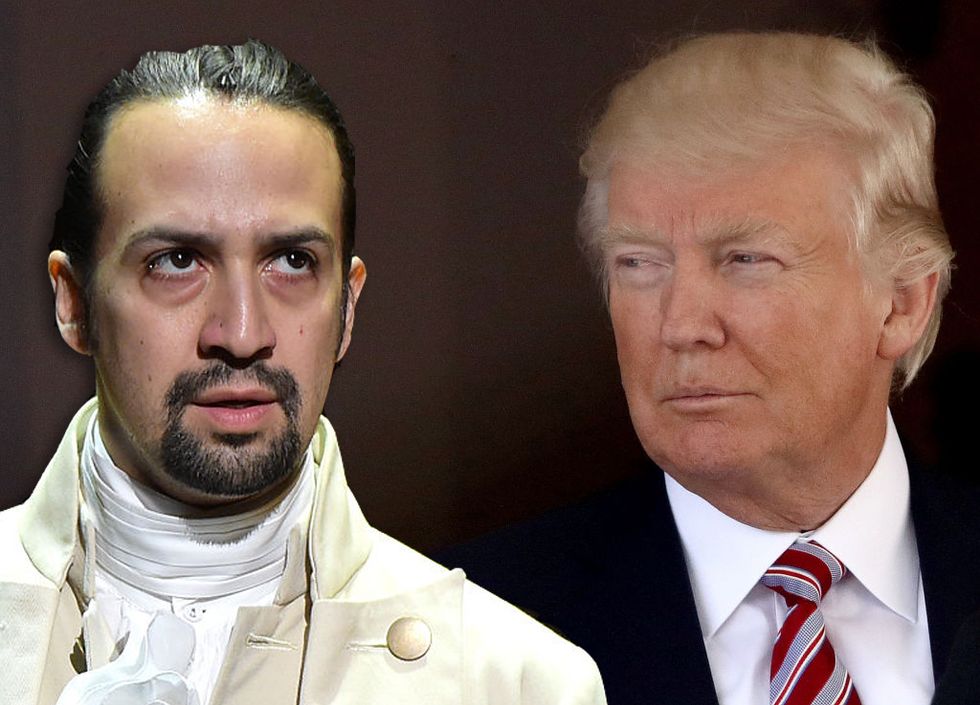 Donald Trump is a divisive character, cultural icon, and since January 20, 2017, the president of the United States. However, the foremost descriptor is the most applicable for many Broadway fans, who view the president as being the antithesis of what the theatre community stands for.

The question of Trump's place in theatre was again raised recently when Broadway fans on Reddit pointed out that Trump was featured in Lin-Manuel Miranda's "96000" from In the Heights. The lyric in question is:

Donald Trump and I on the links and he's my caddy

It was also pointed out in Everything Broadway's editorial team that Trump is also mentioned in the song "Great Big Stuff" from Dirty Rotten Scoundrels. You can watch that Tony Award performance below with Norbert Leo Butz and John Lithgow.

In the song, Butz sings as Freddy Benson:

I'm tired of bein' a chump!

Two hundred pounds of caviar in one gigantic lump

It's worth noting that both these musicals were written before Trump announced his candidacy to run for the highest office on June 16, 2015.

In fact, the In the Heights lyric may have already been settled in at least one production. Redditor shiinzou writers:

If I recall correctly in the Kennedy Center production [(the one with Vanessa Hudgens and Anthony Ramos) of In the Heights they changed "Donald Trump" to "Tiger Woods"!

It is unknown if any Dirty Rotten Scoundrels production has made any lyric changes to omit Trump. If you know of one, let us know in the comment section below.

On the flipside, Avenue Q, which still runs off-Broadway until April, has replaced George Bush with Donald Trump in "For Now." The lyric goes:

Is only for now! (George Bush!)

Is only for now!

Lyric changes are quite common in theatre—particularly as productions open in new locations or words evolve and change meaning.

As Redditor At_the_Roundhouse pointed out, "The Fantasticks changing 'rape' to 'raid' in 'It Depends on What You Pay' because of today's sensitivities to that word" is one example a zeitgeist change.

For the West End version of Hamilton, mostcertainly adds:

Lin changed some Hamilton lyrics for the West End:

In Your Obedient Servant, "Weehawken" is changed to "Jersey"

In The Room Where it Happens, “Well, I propose the Potomac" is changed to “Well have him over, propose it.”