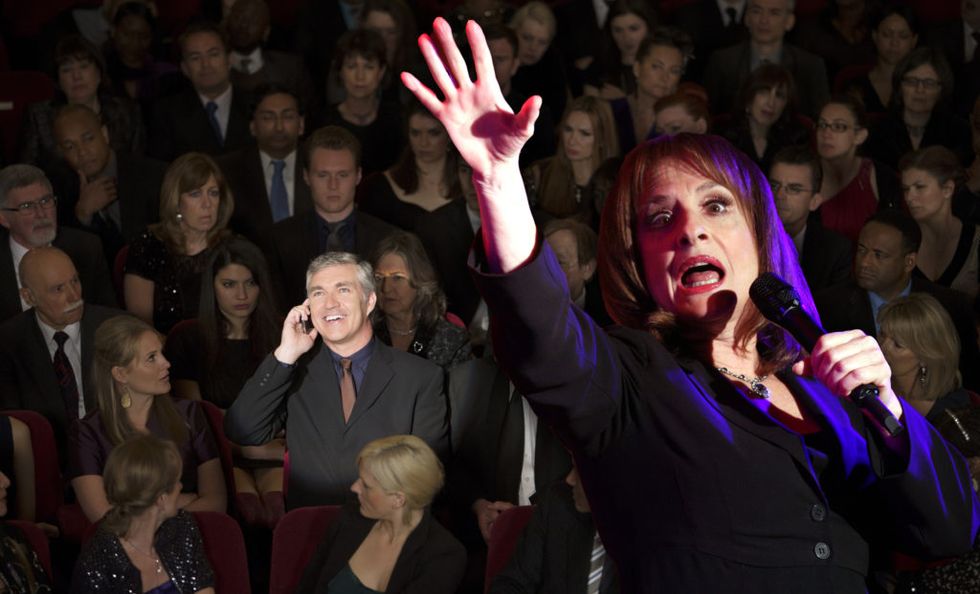 A defining aspect of the theatre is the proximity of the audience to the actors telling the story. Unlike most forms of entertainment, the actors and those viewing them are in direct communion with each other, feeding off of mutual energies and savoring moments in real time.

Sometimes, audience members take this for granted. Rather than allowing one rude person to remove everyone from the world of the story, these actors nipped the unsavory behaviors in the bud.

Some of the best rebukes are short and sweet. Timothy Hughes must have known this when, during the curtain call of the Broadway musical Frozen, a Trump supporter sitting in the front row brandished a banner calling for the embattled President's reelection. Without missing a beat, Hughes snatched the banner from the viewer's hands, earning even more applause.

Unlike some of those featured on this list, Broadway star Caissie Levy waited until she was offstage to call out a filming audience member. She may have been playing Elsa in Frozen, but when the audience member began distracting the actors with her filming, Levy rightly couldn't let it go. Broadway fans were on her side.

Hugh Jackman Asks "You Wanna Get That?"

Cell phones seem sentient after entering a theatre because they almost always seem to sound during the most poignant moment of a play. This was the case during a Broadway performance of A Steady Rain. As Hugh Jackman's character bore his soul to Daniel Craig's, an all-too-familiar noise rang out through the room. Without breaking character, Jackman turned to the audience member and asked, "You wanna get that?" Though the rest of the audience chuckled, we're sure the owner of one rebellious cell phone felt the Wolverine actor staring Adamantium daggers at her.

It's no secret that Lin-Manuel Miranda, the legendary composer and lyricist behind hits like Hamilton and In the Heights, is a lyrical genius, but his skills as a wordsmith were on full display at a recent performance of Hamilton in Puerto Rico. During "My Shot," one of the musical's most adored numbers, Miranda spotted an audience member attempting to film the performance. In a split second, Miranda changed the lyrics from "The problem is I got a lot of brains but no polish" to "Lady filming in the fourth row, please stop it," calling her out as only he could.

Patti LuPone Unleashes the Fear of God onto Everyone in the St. James Theatre

Ten years ago last month, Patti LuPone unleashed a callout heard 'round the world. During her Tony Award-winning portrayal of Mama Rose in the 2008 revival of Gypsy, LuPone literally stopped the show during the musical's climactic number to admonish audience members who were taking pictures during the performance. Though over a decade ago, the tale lives on in theatre legend, warning audience members to never ever mess with Patti LuPone.