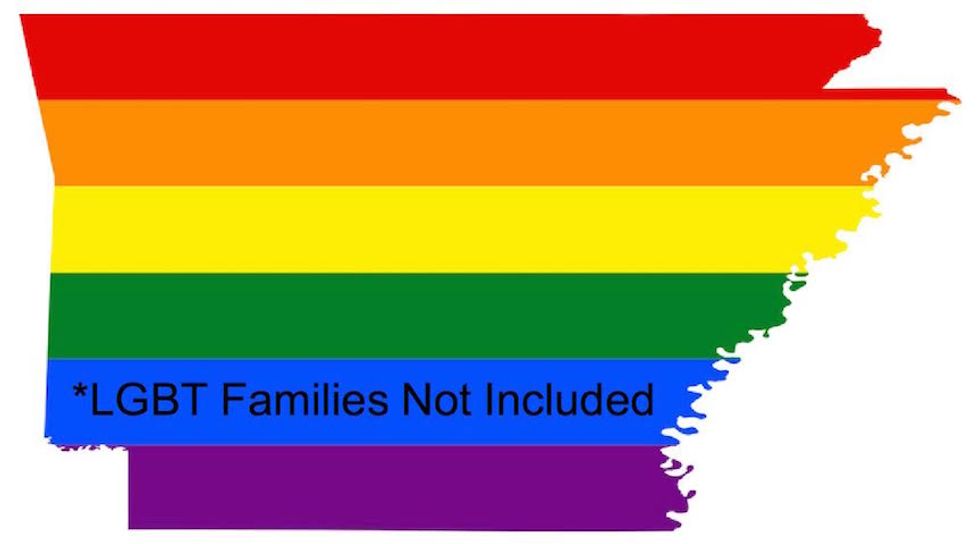 Three lesbian couples challenged the Arkansas Health Department’s Vital Statistics Bureau in court when it refused to list them as either the adoptive or biological parents of their children. The couples won; Little Rock Circuit Court Judge Tim Fox issued a decision on December 1 holding that a state law preventing same-sex couples from being listed as parents was unconstitutional.

The three couples who had issued the challenge were granted amended birth certificates, but their wider victory was short lived. Just over a week after Judge Fox issued his ruling, the Arkansas Supreme Court blocked the order allowing the names of same-sex parents to appear on their children’s birth certificates.

In a 5-2 decision, the state Supreme Court granted State Attorney General Leslie Rutledge’s motion for a stay of the broader, state-wide ruling, pending the outcome of an appeal. Rutledge did not, however, challenge the issuance of amended birth certificates to the three same-sex couples who had brought the case. Those birth certificates will not be revoked.

The state Supreme Court justified its decision to take up the case, arguing that “[t]he issues presented [in this case] are complex, with portions of a statute being struck and substantial additions being made to a provision of the Arkansas Code by the circuit court.”  According to the Court, “[s]ubstantial confusion could result if the circuit court’s order were to remain in effect and subsequently be altered by a decision of this court on appeal,” and therefore, “the best course of action is to preserve the status quo with regard to the statutory provisions while we consider the circuit court's ruling.”

In two separate dissents, Justice Paul Danielson and Justice Rhonda Wood expressed their views that the Court should have denied the state’s motion for a stay. In his very short dissent, Justice Danielson asserted that the state had not met its burden to prove that the implementation of Judge Fox’s ruling should be delayed. Justice Wood agreed, saying that while it may have been necessary to delay executing the part of Judge Fox’s decision that added additional language to the state statute, the Court should not have interfered with the part of Judge Fox’s ruling that found the statute inconsistent with same-sex couple’s constitutional right to marry and to be recognized as parents on legal documents.

Couples across Arkansas, at least for now, will have to wait for the outcome of the state’s appeal before being granted full recognition of their legal rights as parents.