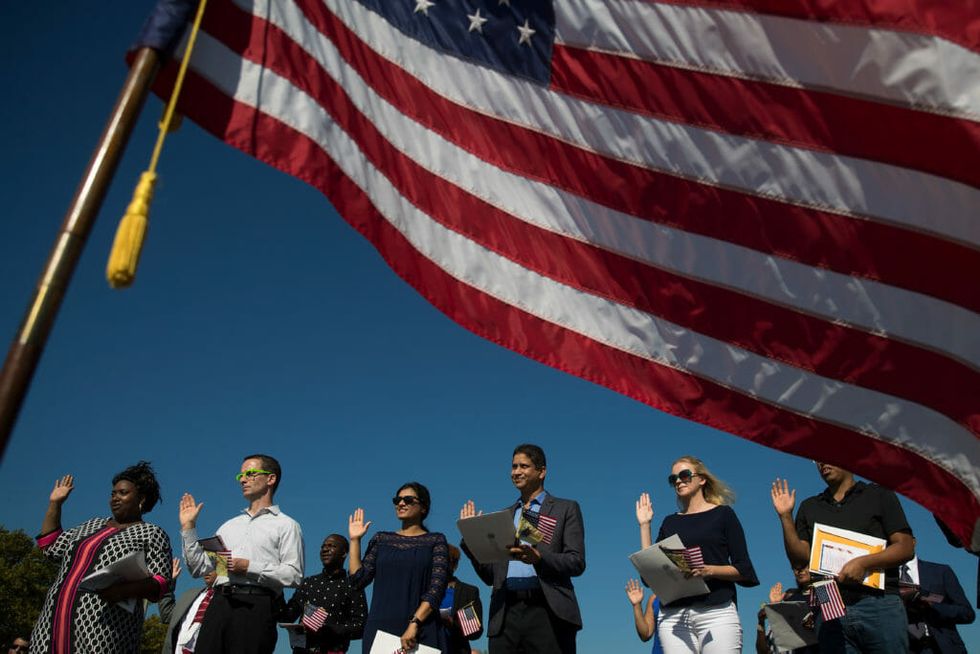 JERSEY CITY, NJ - SEPTEMBER 15: An American flag billows in the wind as immigrants stand and take the oath of allegiance to the United States during a naturalization ceremony at Liberty State Park, September 15, 2017 in Jersey City, New Jersey. To mark Citizenship Day, 35 immigrants became United States citizens during the ceremony. (Photo by Drew Angerer/Getty Images)

The number of Americans jumping ship this year is on track to set a new record.

Last year, a total of 5,411 Americans decided to renounce their citizenship to become expatriates, but this year will be even higher. Right now, the US is currently on pace to exceed last year’s number by more than 25 percent, if fourth-quarter results from in 2017 keep abreast of the last quarter of 2016.

If so, that means the annual number of US expatriates will have risen by more than 50 percent in just two years — that’s about 100 percent over three years.

But, as far as we know, renouncing American citizenship is almost never about politics. Instead, it’s about taxes. The Foreign Account Tax Compliance Act was enacted in 2010, but it’s just been starting to bite in recent years. It makes it difficult to be an American living abroad.

The law, passed by the Obama administration, requires foreign banks to report income and deposit information about foreign nationals. In some cases, banks would prefer to turn away US-born customers rather than create a required paper trail.

The US is one of the only countries in the world that taxes people based on nationality, not country of residencies. This means that Americans must file taxes in the country where they live and work, and in the US. Although they can claim a foreign tax credit, the regulations mean that some Americans have to pay taxes in two countries.

The way around doing so, of course, is to expatriate. Renouncing citizenship is not a simple process, however, because of the Foreign Account Tax Compliance Act. American expats must prove that they are fully compliant with the Internal Revenue Service for at least five years. For some people, that can be costly.

The most famous name on the expatriate list in 2017 is Boris Johnson, the former Mayor of London who is now the British Foreign Secretary trying to negotiate a successful Brexit. He left New York City when he was five, but never renounced his citizenship until a few months after years of public squabbles with the IRS.

Some tax experts suggest that the number of rich expatriates is far higher than the statistics indicate and, for that reason alone, it’s time for the government to repeal the Foreign Account Tax Compliance Act.

Nevertheless, Republicans have not mandated any changes in their current plans to reform the tax system.