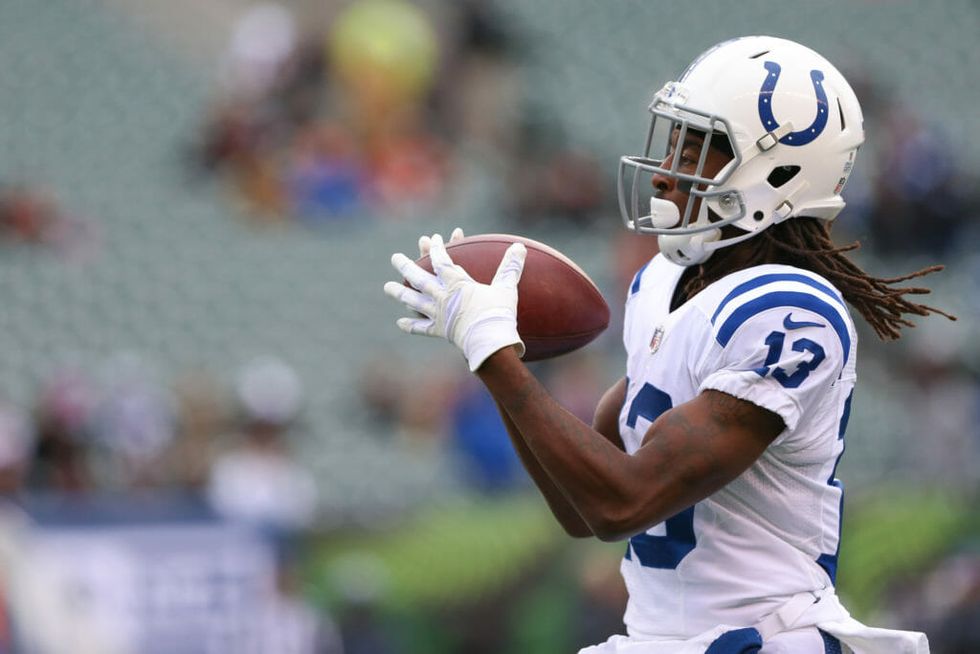 CINCINNATI, OH - OCTOBER 29: T.Y. Hilton (13) warms up before a game against the Cincinnati Bengals (Ian Johnson/Icon Sportswire via Getty Images)

The 2017 NFL season is going by quickly. It's already Week 9, putting us past the official halfway mark of the fantasy football season. The NFL has been particularly crazy this year with a multitude of fantasy relevant players injured and forgotten. Also, the NFL doesn’t have any truly dominant teams. That's led to a high week to week variance in results. Week 9 in particular is unique because it gives us six teams on bye: the Patriots, Steelers, Chargers, Vikings, Browns, and Bears. Some of the premier fantasy football talent isn’t available to us on the main slates of our DFS contests this week. These players include stars such as Tom Brady, Rob Gronkowski, Antonio Brown and Le’Veon Bell. A smaller slate of games makes it harder to find value, and will draw ownerships to a few specific players in good spots.

This article will be focused on showing you some of the better plays to put into your lineups on the week 9 slate of NFL games. Then, I will show you which players to keep out of your lineup to avoid those duds that keep you from cashing. During this article you will often see references to DVOA (Defense-adjusted Value Over Average) a metric from Football Outsiders that measures a team or players efficiency by comparing results from every play to a league average based on situation and opponent. For example, if an offense runs for 4 yards on a 3rd and 3, it will be weighted and graded more favorably than if an offense runs for 4 yards on 3rd and 15.  DVOA is a better way to compare teams offenses vs opposing defenses than more traditional stats like yards gained and allowed.

I almost picked Russell Wilson for my top spot at QB because he has a good matchup at home, but Drew Brees is in a quarterback's dream spot to produce fantasy points. The Saints come in with the 4th ranked pass offense per DVOA.  Furthermore, they take on a Buccaneers team that ranks 31st (second to last) in pass defense DVOA, last in Football Outsiders adjusted sack rate, and third worst passing yards per game to opposing quarterbacks.  Just for good measure, Tampa Bay also ranks sixth worst in fantasy points per game to quarterback, a statistic that can often be a predictor of future results.  Drew Brees gets to take on the Buccaneers from his fantasy friendly home field in the Mercedes-Benz Superdome. Historically, Drew Brees performs better at home than he does when on the road.

Funchess finds himself in a good fantasy spot this week. He is priced as if Kelvin Benjamin were still on his team taking targets. However, Benjamin was traded to the Bills this week and Funchess should step up as the primary receiver in Carolina.  He takes on a 25th ranked Falcons pass defense DVOA, and the third-year Carolina wide out should see an increase in volume and downfield targets.

As mentioned earlier, no Le’Veon Bell or LeSean McCoy on the main slate makes running back a little thin in week 9. Fortunately, Todd Gurley has one of the biggest guaranteed workloads in the NFL and is available for us on the main slate. Todd Gurley has had 4+ receiving targets in every game except one, which helps on a PPR (point per reception) site like DraftKings to raise his weekly floor. He has had over 20 carries in four of the last five games and gets the goal line carries for his team. Gurley gets the nod over Kareem Hunt for me because of the larger workload that is locked in to his role.

The DraftKings price on Hilton is just criminal.  He has had 15 targets over the last two weeks. Moreover, recently head coach Chuck Pagano said he wanted to get Hilton the ball even more.  Hilton comes with a little more inherited risk this week because he is facing a decent defense but the upside is through the roof and the colts Pro Bowl receiver is a player capable of crushing his price tag.

Travis Kelce is coming off a monster performance on Monday Night Football but finds himself in another great matchup versus a cowboy defense that ranks 29th in the league against the tight end position.  Kelce has already had three games of double digit targets. Also, he has seen 7+ targets in all but two games.  Kelce is a part of an under rated passing attack and should be in line to have another great week.

The casual fan may look at Tampa Bay playing in New Orleans and think Mike Evans is an easy plug-and-play. However, the Saints come in with the 4th best pass defense DVOA in all of football. They also boast the best graded shutdown corner in the league in Marshon Lattimore.  Jameis Winston is surrounded by health questions, and Evans hasn’t gone over 100 yards receiving in a game since late 2016. Put all those factors together, and they make a pretty compelling case to fade the Buccaneers star wide receiver.

Green's opponent this week, the Jacksonville Jaguars, currently boast the 1st ranked pass defense DVOA.  The Jaguars cornerback duo of Jalen Ramsey and AJ Bouye combine to be arguably the best cornerback duo in the NFL. Andy Dalton will be under duress all day. I do not think AJ Green will score enough points to justify his price.

Some industry people think the price tag on DraftKings is low enough that Eli could be a player to use this week.  I disagree completely. The Los Angeles Rams currently have the 3rd best pass defense DVOA in all of football, while also being a top ten pass rush team.  Additionally, the Giants are still trying to find their identity after losing star receivers Odell Beckham Jr. and Brandon Marshall. They haven’t thrown for over 150 passing yards the past two weeks. These factors combined have me fading Eli, even at a cheap price.

His price is absurd on DraftKings and Fanduel, and that was before star rookie quarterback Deshaun Watson tore his ACL in practice this week.  I cannot justify using Hopkins when you have receivers like Dez Bryant almost $3000 cheaper on DraftKings, along with other receivers like the ones I listed above.

If you’re playing on Fanduel, or a primetime DraftKings slate, you might be tempted to use one of the cheap Miami running backs, Kenyan Drake ($4000 on DraftKings, $4500 on Fanduel), or Damien Williams ($3700 on DraftKings, $4500 on Fanduel).  While It is very possible one of these guys goes off, at the time of this writing there was no clear starter listed. I will be taking a wait and see approach on this backfield. The Dolphins currently sport the 31st ranked run offense DVOA and are 31st in yards per carry. Even if one guy does emerge this week with more touches-he may not be very effective with this offensive line.  If you are looking for a cheap running back this week, Adrian Peterson ($5600 on DraftKings, $6800 on Fanduel) should have a decent sized workload this week.

I hope these plays help take you in the money in your daily contests. Week 9 is crazy because of all the byes and in-season movement of the players. Check back next week for more DFS starts and fades.